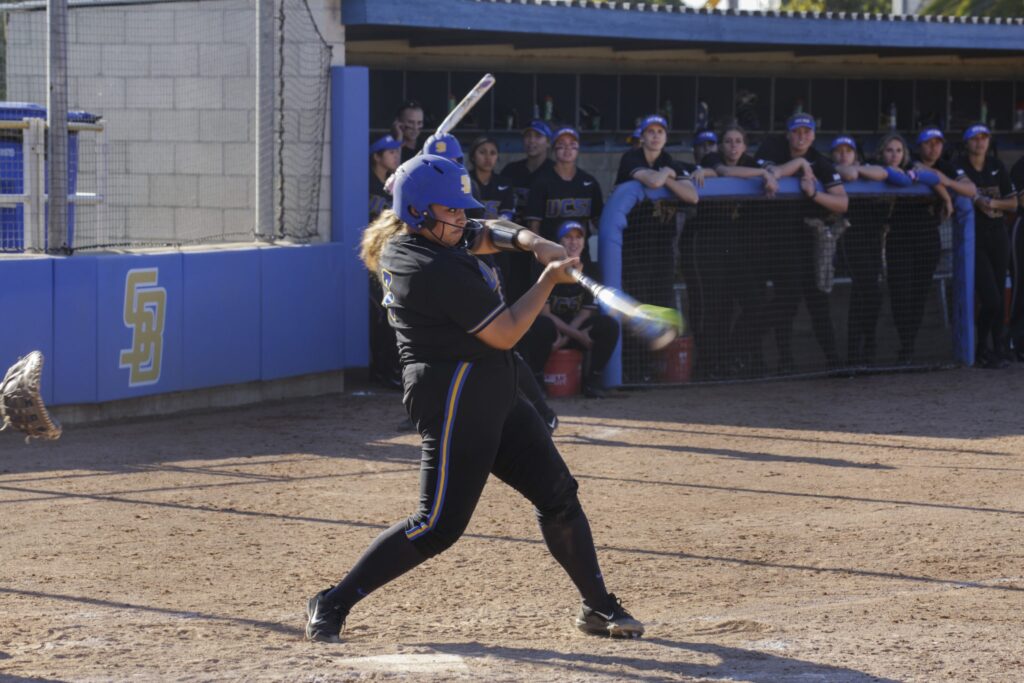 After sweeping the slate in the previous weekend, UCSB collected three wins in five games this past weekend at the Gaucho Classic. Sacred Heart, George Washington, and San Diego were responsible for the team’s three victories in its first three games (3-1, 8-1 and 7-4 respectively), while Northern Colorado handed the Gauchos their two losses (6-5 and 7-1).

UCSB’s dynamite Saturday began in the mid-afternoon with a 2:20 p.m. start at Campus Diamond. The Gauchos struck first in a hectic bottom of the third inning begun by a single by senior left fielder Kristen Clark to left center field.

Clark then stole second and advanced to third on a double from freshman first baseman Alyssa Diaz two batters later. With Diaz on second and Clark on third, sophomore second baseman Sierra Altmeyer reached on a fielders choice as Clark was thrown down at home.

With two outs and their backs up against the wall, redshirt freshman Whitney Pemberton singled, first scoring Diaz, then Altmeyer on a throwing error by Pioneer junior centerfielder Lauren Delgadillo.

Those two runs proved to be all the Gauchos would need, as Sacred Heart couldn’t muster much offense for the rest of the contest. They scored a run in the fifth after two doubles and a RBI single from Delgadillo, but sophomore starting pitcher Veronika Gulvin was fantastic for the Gauchos, throwing all seven innings and pushing her record to 7-4.

UCSB bumped its record over .500 for the first time this season in Saturday’s next victory, this time over George Washington. Their seventh-straight win, the Gauchos wouldn’t need much scoring in this one either with pitchers freshman Felisha Noriega and junior Lena Mayer handling the Colonials with ease.

Diaz was again at the center of the action for the Gauchos in the fourth, starting off the inning with a double to right center. Senior outfielder Stacy Cavazos would enter as a pinch runner and advance to third during the next at-bat, on an Altmeyer single into left field.

Altmeyer advanced on a ground out from Pemberton, and the Gauchos then followed that sequence with more error luck. After a single from sophomore shortstop Melanie Menor hit home Cavazos and got Altmeyer to third, Menor advanced to second on another throwing error by freshman left fielder Jessica Linquist.

Senior third baseman Emily Brucelas then hit home Altmeyer and advanced Menor on an infield single before pinch hitting junior infielder Samantha Lujan shot one to center field, scoring Menor from third. The mid-game outpouring would again be sufficient for the Gauchos, as Noriega would allow the team’s only run, notching her second win of the season.

Santa Barbara’s next game against San Diego on Sunday would prove more difficult than the weekend’s first two contests, though the Gauchos still collected their third win of the weekend 7-4. After taking a 2-1 lead in the fifth, a high-scoring sixth inning would tantalize those in attendance.

Two singles to start the inning from sophomore left fielder Taylor Spence and junior right fielder Kailey Hill opened the floodgates for the Toreros. They capitalized later in the inning with back-to-back, two-out doubles, one off the bat of freshman shortstop Sara Silveyra, followed by one from freshman catcher Madison Casiano, scoring all Spence, Silveyra, and freshman outfielder Savannah Shields, who pinch ran for Hill.

Gulvin would get the Gauchos out of the inning, setting up a wild bottom of the sixth. Junior center fielder Jessica Johnston came ready to play, slamming a triple down the first base line to open the frame. Diaz was next up, hitting Johnston home on a sacrifice fly to left.

Altmeyer continued her hot streak, doubling to right center field, and scoring two batters later on a single from Lujan. With the game now tied 4-4, Menor singled to left, advancing Lujan to second. After a series of substitutions from both teams, pinch hitting freshman infielder Genesis Ramirez loaded the bases on an infield single to the shortstop, Silveyra.

The Gauchos then rallied off three quick runs, the first on a bases-loaded walk, the second again on an infield single to the shortstop and the third on yet another infield single, this time to the pitcher. Senior right fielder Jacqueline Hinojosa, senior left fielder Kristen Clark, and Johnston were responsible for the three RBI (Johnston got her second at bat of the inning).

Gulvin was credited with the victory, moving to 8-4, and Noriega’s one inning of work earned her the first save of her season.

Northern Colorado defeated the Gauchos twice Monday, 6-5 the first game and 7-1 in the second, dropping their record to 12-12 overall. The decisive inning in the former was the top of the fifth, in which sophomore third baseman Jordyn Wiatrak hit a grand slam after senior shortstop Erica Dick knocked in two batters on a double to left center.

The first loss was credited to Gulvin, while Noriega would collect the second. After drawing initial blood in the bottom of the first with a sacrifice fly from Altmeyer that scored Menor, the Gauchos would allow seven-straight runs, never showing much promise for the rest of the afternoon.

UCSB should absolutely be happy with the weekend, however, as the season starts anew, so to speak, with the Gauchos heading into the rest of the season 12-12. Next up for Santa Barbara will be Oklahoma and Loyola Marymount on Thursday, Mar. 16, with the latter hosting in Los Angeles.