The No. 4 seeded Gauchos’ fate came down to Sarah Porter attempting the game-winning shot with a left corner three-pointer that did not sink after deflecting off the lip of the rim, leading to their 55-56 Big West championship loss to No. 2 Long Beach State.

“Oftentimes it’s the team that makes one fewer mistake, and [Long Beach] made one fewer than we did,” Head Coach Bonnie Henrickson said. “I couldn’t be more proud of the resiliency, toughness, and growth of that group in the locker room. For the seniors, they get to have a really good end to the story in their careers. Congratulations to Long Beach, they had a really good year and they battled. We gave ourselves a chance. We’ll kick ourselves for a while but we’ll get better.” 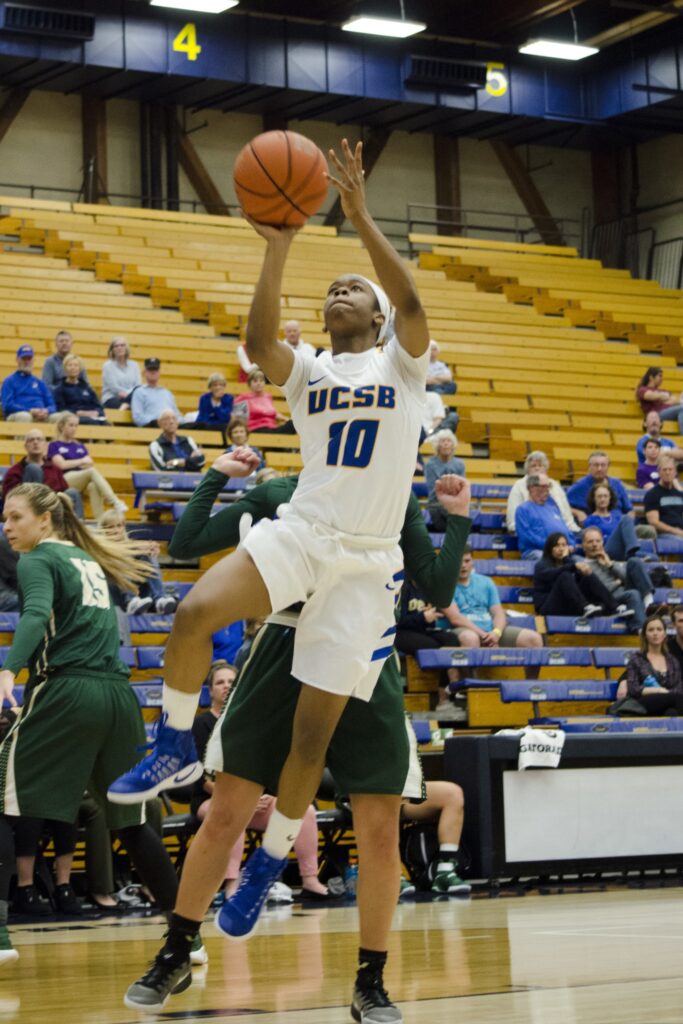 Santa Barbara’s defeat concluded its season, leaving it with a 16-16 and 9-7 conference record. Long Beach State claimed its first Big West title since 1991 and will make its first NCAA Tournament appearance since 1992 following a 23-10 and 12-4 finish.

Down by 19 at the 7:33 mark of the third quarter, UCSB managed to put together a 16-4 run that put them in position to achieve a comeback victory, but the effort came to no avail as time expired.

Similar to its slow start in its previous game against UC Davis, UCSB found itself down 9-2 in the opening minutes of Saturday’s game. Helping steer the 49ers’ scoring was senior point guard Anna Kim with four points during the stretch.

Kim finished with a team-high 15 points on 6-of-11 shooting along with four rebounds, three assists, and one steal.

UCSB’s lethargic start simply stemmed from its shots not falling. Although it managed to chip away at Long Beach’s lead as the game progressed, UCSB ended shooting 35.8 percent from the field and 36.4 percent from behind the three-point line.

Scoring the first basket for UCSB was redshirt junior forward Drew Edelman with a layup in the post. Despite outrebounding LBSU 41-28, Santa Barbara still had to counter the 49ers’ attempt to shut down the paint.

Edelman recorded her ninth double-double of the season, her second of the Big West Tournament, with 14 points and tied her career-high of 14 rebounds.

Getting down low was a challenge as UCSB went 3-of-14 from the field (21.4 percent) with Porter netting the final two scores from beyond the arc.

Nonetheless, Long Beach State’s defensive press was successful in disrupting UCSB’s pace on offense as the 49ers held the Gauchos scoreless for 4:36 of the final five minutes of the first quarter, allowing the Beach to take a 18-8 lead.

A 10-4 run to open the second period sustained the 49ers’ double-figure lead, increasing it to 28-12 following a made jumpshot by senior guard Raven Benton to jumpstart the string of points. Benton had 12 points while going 5-of-11 shooting.

With the momentum shifting in favor of Long Beach State, UCSB looked to trim its deficit after calling a timeout with 4:55 remaining before halftime.

Providing the first step toward cutting the lead was freshman guard Aliceah Hernandez with a long range make. On the Gauchos’ next possession, it was redshirt junior point guard Drea Toler with the defensive rebound and drive on the other end of the court for a layup that reduced UCSB’s deficit to 17-28.

Another layup by Toler helped bring UCSB within a 10-point margin, but free-throws and a jumpshot by the 49ers’ Gigi Hascheff gave LBSU a 33-19 lead at the half.

Giving LBSU its largest lead of 19 points was Kim with a make from behind the perimeter as the 49ers went up 38-19.

Still, UCSB remained focused and had a 16-2 scoring outburst that catapulted the team to possibly achieve the come from behind victory.

Despite shooting 36.4 percent and 25 percent from behind the three-point line in the quarter, UCSB’s defense helped to produce on the offensive side of the ball.

“It had to start with our defense,” Henrickson said. “We were active. I think we had more deflections in a five minute stretch than we did in the whole first half. That’s who we need to be consistently. We made the run because we started to guard.”

The run included a 7-of-8 performance at the free-throw line, in which Toler knocked down her pair to ignite UCSB.

Uplifting the Gauchos’ spirit was a made three-pointer by Porter to finally trim LBSU’s lead to single figures at 40-31.

Both a pair of made free-throws by senior point guard Onome Jemerigbe and a make from three-point range by Hernandez led to UCSB’s deficit being 35-40. A trip to the free-throw line for LBSU’s Benton allowed the 49ers to take a 42-35 lead going into the fourth quarter.

Although UCSB managed to outscore the 49ers 20-14, the clutch emergence of senior forward Madison Montgomery for LBSU was pivotal to the game’s final result.

Montgomery scored 10 of her 14 points in the final period, six of which came from behind the three-point line.

But it was the best scoring quarter for UCSB who had a 63.6 field goal percentage and was able to gain a 51-49 lead with 2:27 remaining in regulation after a three-point make by Toler, who had nine of her game-high 16 points in the game’s last 10 minutes.

However, responding with baskets after losing the lead twice was Montgomery with a layup and eventual three-pointer that led to a 54-53 lead for LBSU. Extending the lead to 56-53 was a layup by senior guard/forward Jewelyn Sawyer.

Two trips to the free-throw line ended with Toler making 1-of-2 attempts at the line before UCSB was in the position of having the game’s final possession while facing a 55-56 deficit.

Able to draw up a play following a replay review, UCSB made sure it got the ball to its ‘go-to’ player in Porter, whose shot didn’t fall just seconds before the final play clock buzzed.