With a current total of 14 Big West Tournament titles, the No. 4 seeded UCSB women’s basketball program is in the position to add to its collection of hardware following its 73-59 upset victory over No. 1 seeded UC Davis. 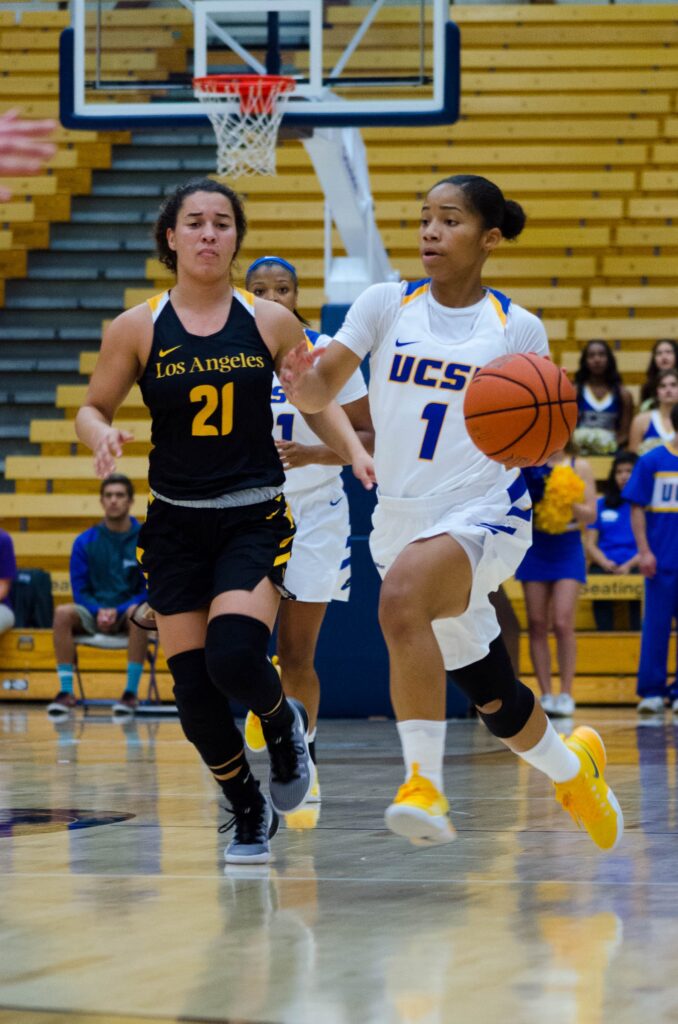 The Gauchos prevented UC Davis from earning its second NCAA Tournament birth ever. The triumphant win also ended the Aggies’ 10-game winning streak, their longest in their Division I history.

Santa Barbra improved to 16-15, while the Aggies’ season ended with a 23-7 record and will play in the WNIT after being crowned the Big West regular season champion. UCSB will play Long Beach State this Saturday in the 2017 Big West championship. The Gauchos are seeking their first title victory since defeating the Beach 63-54 in 2012.

“I’m just happy to be here. It’s been a long road so to just have the opportunity to play in the championship is mind blowing. I never pictured we would be here, but here we are,” senior point guard Onome Jemerigbe said.

Following the career performance their teammate Sarah Porter the previous night, both Jemerigbe and redshirt junior guard Drea Toler emerged as the Gauchos’ leading scorers en route to their win over the conference title favorite.

The backcourt duo combined for 44 points. Jemerigbe recorded a new career-high in points with 21. Toler’s 23 points was also a new career-high as she was responsible for all 23 of UCSB’s bench points, helping the Gauchos outscore UC Davis 23-2 in the statistical category. Her 10 made field goal off 17 shot attempts also is a career best mark.

“The energy Drea and Onome provided us on the defensive end and how much they attacked and got to the rim was the difference offensively, “Head Coach Bonnie Henrickson explained.

UCSB’s 10-for-10 shooting performance in the third quarter was the game’s deciding factor, forcing the Aggies to play catch-up against a streaking Gauchos team. Santa Barbara ended Friday with a 50 percent field goal percentage (27-of-54) and 42.9 three-point percentage.

After earning a bye in the first two rounds of the Big West Tournament, UC Davis came out of the gates looking like a team that was possibly on its way to a blowout victory. It gained a 7-0 lead through nearly three and a half minutes of play.

Helping create the early lead was both junior guard Rachel Nagel and redshirt sophomore forward Morgan Bertsch. As one of the topm post players in the Big West, Bertsch scored the Aggies’ first basket. The scoring stretch also included a three-pointer by the team’s sharpshooter in Nagel, who finished with a team-high 18 points.

Despite allowing the Aggies to shoot 42. 9 percent, UCSB held their star play in Bertsch to just 12 points on 4-of-9 shooting before eventually fouling out in the fourth quarter.

“We just felt like we needed to defend in transition, because Bertsch rim runs as well as anybody,” Henrickson said. “Even though we lost to them earlier, we felt confident if we could get another shot and defend them in transition we would at least give ourselves a shot to be successful. That was much better for us tonight.”

Coming out of a timeout, UCSB managed to recuperate along with the help of subbing in Toler, who scored four-straight points off go-ahead layups. Knotting the score at seven apiece was Porter with a three-pointer.

Joining Toler was Jemerigbe with drives to the paint to give the Gauchos their first lead of the game at 11-9. Back and forth scoring between the two teams led to a 15-13 lead for UC Davis after a made jump shot by Nagel.

The pace of play would slow down with both teams exchanging scores as ties and lead changes occurred. A three-point differential was the largest margin between the two.

With less than 10 seconds remaining, Porter knocked down a shot from beyond the arc to put UCSB up 29-27. But a made halfcourt shot to beat the buzzer by Nagel gave UC Davis a 30-29 lead going into the half.

With both teams vying for momentum, the third quarter worked in favor of UCSB outscoring UC Davis 23-15.

A 7-0 run with contributions from Toler, redshirt junior forward Drew Edelman, and capped off by a made three-pointer by Jemerigbe propelled UCSB to a 40-34 lead. Edelman finished scored nine of her 12 points in the quarter as she concluded with a 4-of-7 shooting and four rebound night.

Complementing Edelman was Jemerigbe with 10 of her 21 points in the period. The senior scored the team’s only two three-pointers during the quarter and ended it with a layup that increased UCSB’s lead to 52-45 heading into the final 10 minutes of regulation.

A three-pointer by junior guard/forward Dani Nafekh cut the Gauchos’ lead to 59-54, bringing Davis within its smallest deficit of the quarter.

Yet, an 8-2 scoring stretch sparked by a long range make by Toler which ended with a three-pointer by sophomore guard Coco Miller led to a 67-56 UCSB lead with 2:50 remaining.

It would not be enough time for an Aggie comeback as a steal and go-ahead layup by Toler provided the finishing touch to UCSB securing its semifinal victory before closing with Porter at the free-throw line.

UCSB and Long Beach State will play Saturday, March 11 at 4 p.m. at the Honda Center in Anaheim. The game will be nationally televised on Fox Prime Ticket.