Ever since his first appearance, Wolverine has been one of the most beloved characters in the X-Men film franchise. Actor Hugh Jackman has played this part so well that his version of the character has become a very recognizable pop culture icon in recent years. Now, after eight movies, he will end his long run as the well-known superhero in his final film as the mutant hero, “Logan.”

It’s the year 2029, and mutants have been nearly extinct. Wolverine, or Logan, has lost his healing ability, and Charles Xavier (Patrick Stewart) has been affected by Alzheimer’s, which has left him unable to fully control his powers. They are on the edge of the Mexican border, working to eventually live a better life, when they accept the calling of a woman who wants them to escort a young girl, Laura (Dafne Keen), across America to the Canadian border.

Despite developing over the course of the franchise, Jackman’s character undergoes the fabled hero’s journey as if his character is just being introduced to us. By placing huge limitations on his mutant powers, Wolverine feels different from how he was in past installments, as tension for his life slowly begins to rise. While it is slightly helpful to understand Logan’s relationship with Charles Xavier in past films, one does not need to know any specific events of previous entries to follow this film’s plot. It almost seems as though director James Mangold approached this story as if the other X-Men movies never happened.

Because of this, “Logan” distances itself from all previous X-Men installments tonally and stylistically, as it earns an R rating. Apart from bloodier action scenes and more profanity, Mangold uses this opportunity to create a more mature movie. The themes and mood reflect this, as the setting is not as colorful as it was in the franchise. The cinematography and costume design suggest a harsher world, where the threat from the enemy is worse than ever. With this setup, Mangold tries to break apart from the comic book genre to make something entirely different. Despite having great action scenes, the best moments of the movie were the simple character moments that the MCU movies typically don’t care to include. Sharing themes with the stories “Children of Men” or “The Last of Us,” the comic book elements are seamlessly integrated into the film, as the movie doesn’t feel remotely like a “comic book movie.” 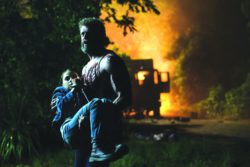 That is, until the second half.

Up to this point, the film was nearly flawless. There might have been a few technical issues and some slight over-acting from Patrick Stewart, but perhaps I was just nitpicking at the movie. However, the film truly does reach a climax, because the film starts to falter right after its best moments. The pacing starts to drag, and major plot elements slowly become sillier. In the first half, the film felt like a neo-Western that simply included four mutants, as it relied on the various character arcs and interactions instead of “comic book elements” to progress the story forward. With the introduction of a younger Wolverine clone, the increased inclusion of Dr. Rice (Richard E. Grant) and his plan involving mutant children, the film started to take a dive back into being a comic book movie. The second half isn’t completely awful; it’s just that the first half had such a perfect balance that it set high expectations for the rest of the film.

However, because of these expectations, even the smallest falters made the film appear more unbalanced, as the comic book elements became very present. As more characters were introduced, the film started to become overcomplicated. With these sudden inclusions, the film removed some of the realistic, serious undertones that the first half was spent building upon. The biggest strength of the first half was that there was almost a complete lack of superpowers used in a superhero movie. Even then, the mutant powers fit the mood that the film set for itself. But as the film went into the second half, it seemed as if characters and scenes were written into the script just so the film could make other major moments happen. If the screenwriters did a few more tweaks, they could have still gotten to these moments while staying true to the tone they set for the film. The characters established in the first half could easily hold the movie on their own. Those who appeared in the second half could have just been mentioned, and the film would have worked just fine.

Even though “Logan” faltered in its second half, it is still one of the more enthralling comic book movies to come out recently, as the first half alone transcends the comic book genre (as most people are suggesting for the film overall). If the film was strong throughout, then it would certainly be “The Dark Knight” of the X-Men franchise. But as it stands now, it is solely a solid comic book film. While Jackman didn’t end his 17-year run as Wolverine on the best note possible, he sure did end on a great one.