Growing up in Westminster, a Vietnamese-American populated area, pho has always been at the center of my life. Within any mile in my hometown, a pho restaurant is always present. It got to the point where I became tired of it. However, after moving away from home to this suburban city of Santa Barbara, I have come to appreciate the smell of fresh herbs and pungent fish sauce in every dish. As the result, I ventured through Goleta to downtown Santa Barbara in search for restaurant that would remind me of my hometown. 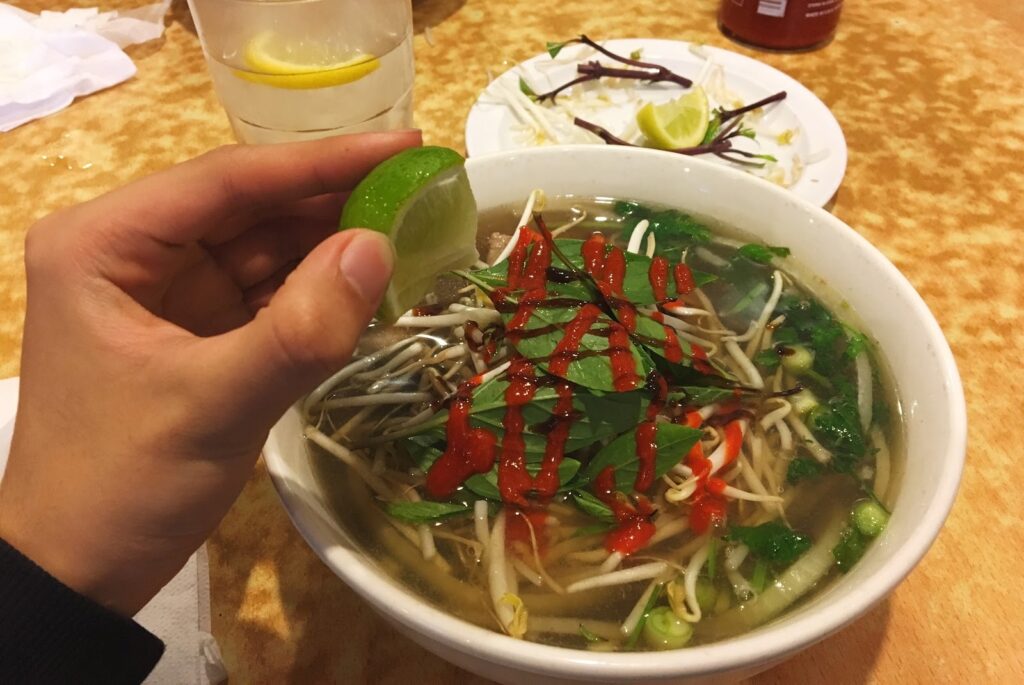 Noodle City was the first pho shop that I had visited since my move to Santa Barbara. When I walked in the restaurant, I was culturally shocked. From the way the tables are arranged to the paintings and pictures on the wall, everything looked similar to a pho restaurant that I would see in Orange County. My friend and I ordered two large bowls of rare steak with rice noodle soup and, I have to say, the portions were enormous. Before I squeezed in a massive amount of sriracha and hoisin sauce to ruin the flavor of the broth, I tasted the original base. Noodle City broth was sweet and savory because it was made from beef bones and was brewed carefully rather than the flavored powder that anyone can get access to at a supermarket. Along with the pho, we usually get one plate of vegetables per bowl, but here, we only received one small plate of vegetable that includes bean sprout, lemon, culantro and basil. I figured the reason why they were so tight on the vegetables was probably due to the limited supply. Regardless, Noodle City has given an opportunity to access ethnic food that I’ve missed so much ever since I moved to college. At first, I was uncertain about this restaurant but I’m glad that I went out of my comfort zone and gave this place a try. 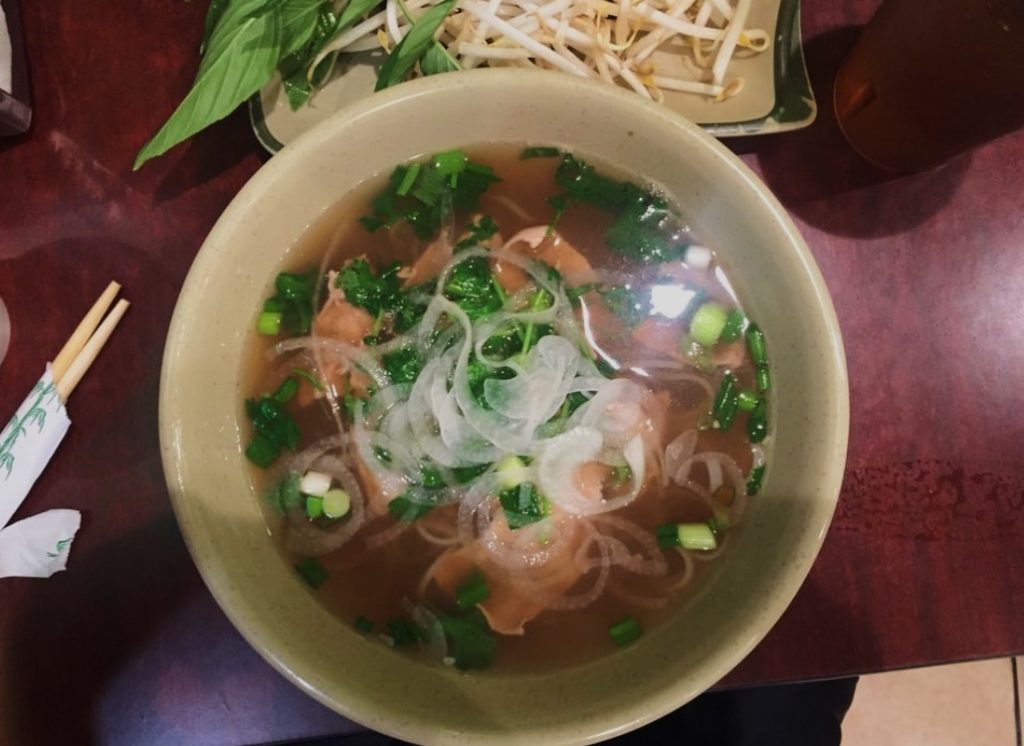 My next stop was Pho Bistro, located at 903 Embarcadero Del Norte in Isla Vista. Pho Bistro is a convenient pho restaurant that will satisfy any craving UCSB students may have without making them travel a long distance. Coming to this place, my expectation was higher because of my previous dining experience at Noodle City. Unlike Noodle City, where I got the vibe of home, Pho Bistro gave me foreign vibe. The restaurant was quite small with absolutely no decorations, just chairs and tables that weren’t uniform. It is a very casual place — you grab your own menu and sit at any table you desire. Because I wanted to compare the ethnic taste of the dish, I decided to order the same meal, a large bowl of rare steak with rice noodle soup. When the waiter brought out our serving, I was shocked. For a $10 bowl of pho, I only received five pieces of steak. Their portions were smaller, yet it was more expensive. If you are looking for an honest review of ethnic food, I would not recommend this place, because the soup base lacks dimension and had no pho essence. It felt as if I was dipping my rice noodles in plain water. Regardless, I would return because it is the only Viet restaurant in I.V. 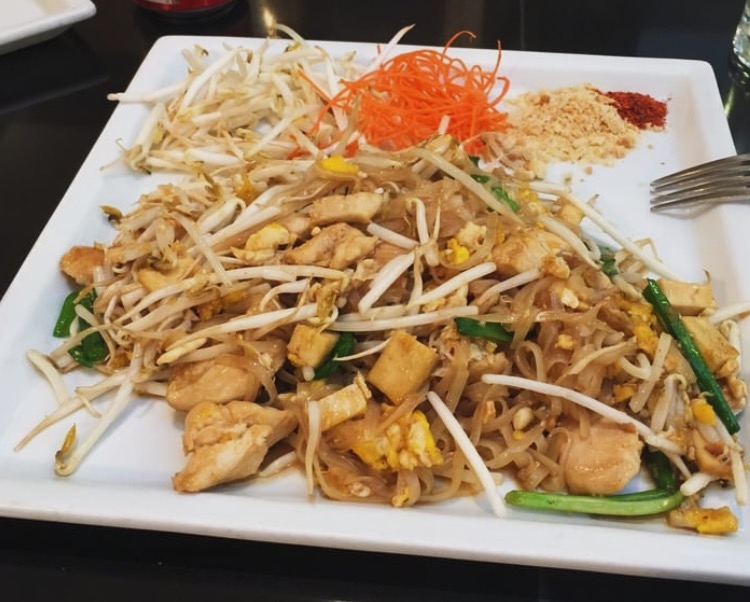 After my experience at Pho Bistro, I decided to give more restaurants a shot. When I asked my friends to recommend me a good pho restaurant, they foolishly recommended Empty Bowl Gourmet Noodle Bar located in downtown Santa Barbara. I walked into this bar-like restaurant inside of SB Public Market expecting to grab a warm bowl of soup on a rainy day, but when I looked at the menu, all that was served was Thai food. I was disappointed, but I still wanted to try their cuisine so I did order pad Thai. Since many Asian foods share similar basic ingredients, I can see why many people might be confused in differentiating each dish. The main reason why people mix up these two dishes is due to the fact that they share the same rice noodles. However, I think that each Asian dish has its own distinct taste. In conclusion, Empty Bowl serves authentic Thai, NOT Vietnamese, food which means that pho is not served at this restaurant. Despite that, their chicken tofu pad Thai was amazing.

With all this in mind, it is not my position to tell you where or where not to eat, but I can only recommend and provide my feedback. I would recommend you to go out, explore and taste the different cuisines in Santa Barbara.

You have manly hands..

You should try Saigon in Goleta next to K-mart.

You call this a review? I hope it is not your goal in life to be a food critic/reviewer. More important questions when reviewing pho is: Does your vegetable plate come with “ngo gai” aka spiky cilantro? Can you detect monosodium glutamate in the broth base? Do they add black crushed peppers before bringing your bowl to you? (I knew of a Vietnamese pho restaurant on State St that did it years ago. I graduated in 2005.) Does the menu offer the full meat selection? Tripe? Brisket? Meatballs? Etc? I assume that because you ordered a large bowl, they might… Read more »

lol, a bit salty there @Anonymous