Up until Friday’s game against Penn State, the non-conference play had been sort of a refuge for the UCSB men’s volleyball team. The Gauchos were 4-0 against non-MPSF foes, while just 3-9 against conference opponents. 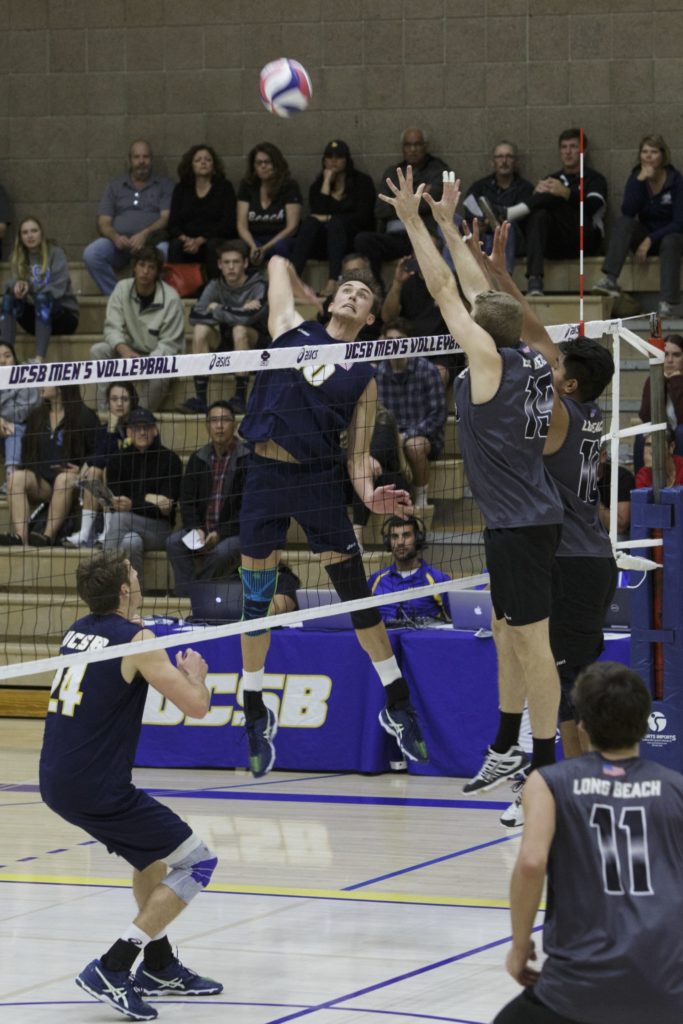 With a large block in front of him, Jacob Delson hits at an angle. Dustin Harris / Daily Nexus

One day later, still at University Park, UCSB managed to restore some order to their non-conference play by sweeping Division II team Lees-McRae. The victory saw several relatively fresh faces get solid playing time for the Gauchos, who came back from Pennsylvania with a 5-1 record in nonconference play.

UCSB was without junior star hitter Jacob Delson for both matches, and his absence really hurt the Gauchos against Penn State. The Nittany Lions never led by too much over the four sets, but UCSB simply lacked the firepower necessary to really take control.

The second-set victory was a product of Gaucho defensive strength, as well as some major Penn State offensive struggles. The Nittany Lions hit at a -.077 clip in that set, which enabled UCSB to cruise to their one win of the night while racking up just nine kills.

The other three sets lacked any decisive moments for either side. Penn State simply gradually pulled away from the Gauchos in sets one and three, while set four went all the way down to the wire before the Nittany Lions were able to put UCSB away.

Freshman opposite hitter Spencer Fredrick stepped up for the Gauchos in Delson’s absence with a team-high 12 kills, as well as three blocks. Those 12 kills were a season high for Fredrick, who made the most of his Friday night opportunity.

Compared to Friday night’s match, Saturday’s contest against Lees-McRae was in a whole other world when it came to the difficulty for UCSB. The Bobcats led for just seven of the 117 points played on Saturday and never challenged the Gauchos in the late stages of any of the three sets.

The relatively light matchup allowed a wide variety of players to get some serious playing time. Freshman libero Grady Yould, redshirt freshmen opposite Kevin Fults and middle blocker Brandon Hopper and senior setter Grady Zant all played in every set, a major departure from the usual rotation.

As evidenced by the final scores, the extra playing time didn’t overwhelm the new faces. Hopper was particularly effective in his expanded role, hitting .636 while posting eight kills, good for second on the team. His block on an attack from Bobcat senior middle blocker Rudy Klaas ended the third set and handed UCSB the match.

Hopper was right behind Keenan Sanders in the kill category, as the freshman middle blocker posted a team-high 11 kills and hit .562. Sanders added five blocks and an ace to all those kills, giving him a well-rounded performance.

The Gauchos next match is at 7 p.m. on Wednesday, March 8th night against No. 12 Cal State Northridge at Rob Gym.