The Daily Nexus
Water Polo
No. 12 Gauchos Sweep Through Latest Weekend Slate of Games Behind Shore’s Multiple Hat-Trick Performances
March 6, 2017 at 5:05 am by Tommy Pardini 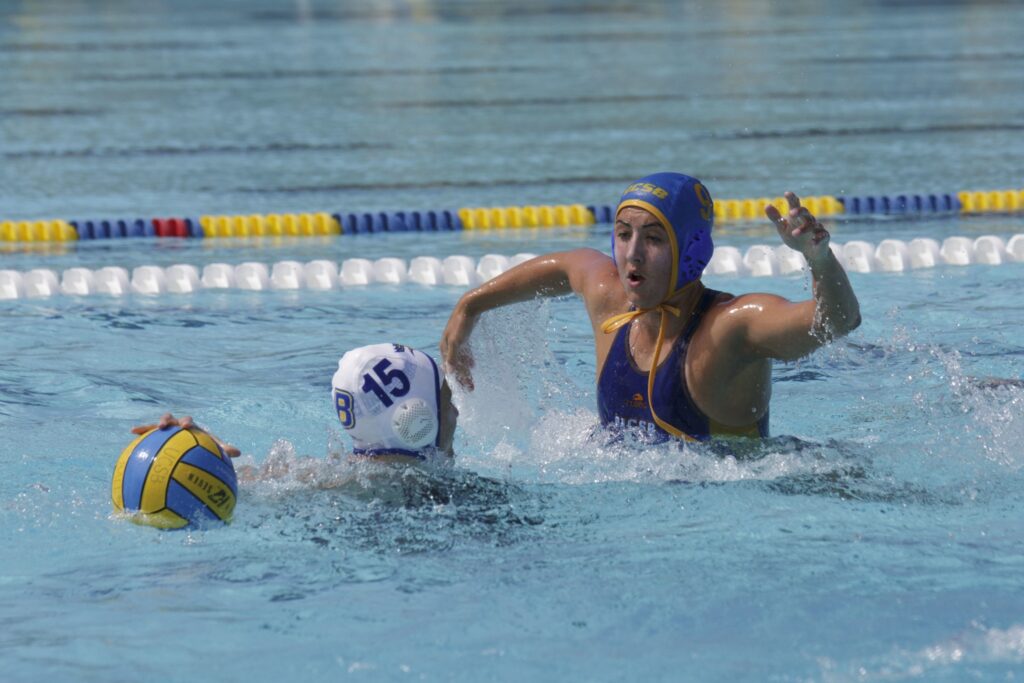 Kate Pipkin creates a wall between her opponent and the goal. Dustin Harris / Daily Nexus

After a slight hiccup during last weekend’s Barbara Kalbus Invitational, the No. 12 UCSB women’s water polo team swept their slate of games this weekend as they continue to build a winning streak with just one game remaining before Big West action.

UCSB obliterated La Verne 16-1 in its first game on Saturday before handling Pomona-Pitzer 9-6. On Sunday, the Gauchos returned home and took down No. 23 Cal State Bakersfield in their first home game in over a month.

Santa Barbara improves to 13-6 on the season after totaling three wins this weekend. The Gauchos scored their highest total of goals in a game this year with 16 against La Verne on Saturday. Senior utility Taylor Shore earned a hat trick in each game over the weekend.

UCSB faced La Verne in its first game at the Claremont Convergence. The Leopards came into this game with a 2-1 record on the weekend; however, that momentum quickly sank.

This one was all UCSB from start to finish. The Gauchos scored their most goals in a game this season with 16 while also conceding their fewest amount in a game, giving up only one goal.

30 seconds into the game, the Gauchos already scored with a goal from sophomore utility Sarah Kreiser. Shore added in two more goals after that before freshman attacker Natalie Selin wrapped up the first-quarter with a score, making it 4-0.

Freshman utility Sarah Snyder began the second-period scoring. 23 seconds later, sophomore attacker Guarina Garcia of La Verne scored its first and what would be its only goal of the contest.

UCSB responded by going on an 11-0 scoring run for the remainder of the game. Snyder and freshman utility Abbey Grosse each scored to close out the first half. The lead for the Gauchos was 7-1 at the break.

One minute into the third quarter, Shore scored again for her hat trick. Later in the quarter, after Kreiser scored her second of the game, Shore threw in her fourth as the Gauchos led 10-1 with more than a quarter left.

The final quarter had goals from senior attacker Brenna Thomas, freshman utility Kate Coski, senior utility Jenna Solberg and Rosenberg. The final score was 16-1, marking the Gauchos’ largest margin of victory this season.“Our counter attack was on, we were playing with great awareness and were just playing together,” said Head Coach Serela Kay.

“Our counter attack was on, we were playing with great awareness and were just playing together,” said Head Coach Serela Kay.

In its second and final game at the Claremont Convergence, UCSB went up against the host Pomona-Pitzer. These two sides met at the UCSB Winter Invitational when the Gauchos won by the score of 15-5.

The Sagehens entered this meeting having won four of their last five games after an eight-game losing streak to start the season.

After a very quiet first quarter, the Gauchos led 1-0 with a goal from Kreiser. The second quarter was a completely different story, as UCSB went on a goal-scoring tear.

Six Gaucho goals came in the second period of play while the Sagehens scored two over the eight minutes.

Solberg and fellow senior, defender Sophie Trabucco each scored within the first two minutes of the quarter.

Pomona-Pitzer answered with two quick goals of its own as they brought it to a one-goal game.

Two minutes later, Coski scored for UCSB, and shortly after Shore extended the lead to 5-2.

In the final 1:39 of the first half, the Gauchos poured it on with two goals from Solberg and one goal from Snyder to close the half with a commanding 7-2 advantage.

The Sagehens cut the lead to three with 2:17 left in the third quarter, but the Gauchos ended the quarter with goals from Pipkin and Shore to restore the five-goal advantage at 9-4.

UCSB conceded two goals and scored none in the final stanza as they clinched another victory.

On Sunday UCSB played Cal State Bakersfield in its first game at Campus Pool in over a month.

It was a shaky start for Santa Barbara, going down 1-0 from a nice backhanded finish from CSU Bakersfield. UCSB answered when Shore found Pipkin for the tap-in goal.

The roadrunners took the lead again after that, but UCSB responded with a goal from Selin off a counter attack to conclude the first quarter at two goals apiece.

In the second quarter the Gauchos took their first lead of the game with a nifty far-post lob shot from Pipkin.

The Roadrunners tied it up shortly after off a well-executed power play from an exclusion.

After that, UCSB turned it on with three unanswered goals in just over a minute of action from Kreiser, Shore and Solberg.

In the second half, the Gauchos increased the unanswered goal streak to six when Snyder, Thomas and Shore added to the lead to make it 9-3 at the 5:19 mark in the third quarter.

CSU Bakersfield ended the game on a 5-2 run and UCSB won in its home pool by the score of 11-8.

Improving the defense was a big initiative coming into this weekend. The Gauchos only allowed five goals per game in the three games over the weekend.

“I think we did a good job defensively,” Kay said. “It’s important now for us to start taking what we do defensively and fueling it into our offense and remembering to attack as the game goes on.”

Taylor Shore contributed to another outstanding weekend with not only 10 total goals but also assists and steals.

“I was super excited going into this weekend to get some solid games in,” Shore said. “As a senior I feel like it’s my duty to step up and take control.”

The Gauchos feel like they took another step forward with Big West play around the corner.