“Get Out” served up the most fun that I’ve had at the movies in a very long time. Not only is it an incredibly tense, ridiculously funny and shockingly unnerving film, but it’s also an immersive thrill-ride. While the film is surprisingly impressive, it’s even more jaw-dropping when you consider that “Get Out” is Jordan Peele’s directorial debut. While Peele brings along his knack for humor, don’t be deceived; “Get Out” is intensely thrilling and insanely smart. It’s the rare film that’s a perfect mix of comedy and suspense, all the while remaining an absolute blast.

When his girlfriend invites him to meet her family, Chris, played by Daniel Kaluuya, decides to go, knowing all too well the inevitable and uncomfortable topic of his skin tone. However, nothing could prepare him for what actually lies at the Armitage homestead. Surrounded by elitist, white, upper-class citizens, African-American servants and heavy doses of passive-aggressive racism, Chris can’t help but feel an overwhelming desire to, well, get out.

Right out of the gate, “Get Out’’ opens with a perfect start that comfortably situates the audience into the unnerving, chuckled tone of the film. With its simple setup and seemingly basic plot, the film’s modest layout would normally signal a run-of-the-mill slasher film. But, as time passes, its structure and narrative become increasingly layered and complicated, proving that this movie is anything but your usual horror flick. There’s a clear crescendo as the film goes on, a rise that leads to both a maddening insanity and a worthwhile payoff. But this progression and escalation is so well-guided due to its intricate and layered plot that the film succeeds where less intelligent ones would fail. The film’s success lies in the fact that it uses this intelligent design for the purpose of entertainment. While sections of “Get Out” do address deeper and politically sensitive topics, the film never becomes a lecture on political awareness, nor does it ever forget its best quality: its ability to entertain with gripping humor and suspenseful horror.

The most clever techniques in “Get Out” come from its attention to detail and its investment in audience awareness. Peele has absolutely coated and smothered the first half of the film with foreshadowing. Long after you’ve left the theater, these once-hidden details and premonitions will begin to click in your brain, allowing you to uncover aspects of the film you weren’t originally conscious of. This attention to detail makes “Get Out” the kind of movie you can watch over and over again without ever getting bored. This technique is mostly found in Peele’s often tongue-in-cheek script. Dialogue is riddled with references and coded words that stand out like a sore thumb. In the paranoid setting, you begin to question even the smallest details. Nearly every line seems to have a hidden meaning, and by the end of the film, the script’s payoff is nearly mind-blowing. It’s jam-packed with so many hidden goodies that it would be nearly impossible to grab everything on the first go. “Get Out” definitely warrants multiple viewings.

The same attention to detail can be found in the film’s sound design. While the score is a bit lackluster and often falls to the background, the sound design ends up by playing an integral role in both the narrative and the immersive nature of the film. Distinct sounds will begin to stand out and change meaning as the film goes on, playing into both the plot and the characters’ personalities. It sounds a bit complicated, but it works so seamlessly and on so many levels without much effort on behalf of the audience.

These tricks and techniques transform “Get Out” into some kind of participatory mystery-thriller. It’s like the movie begs the audience to solve its puzzle. All the pieces are there for you to figure it out, you just need to pay attention to the detailed clues. And that’s part of what makes “Get Out” so much fun; its engagement of the audience. However, as much as you try to figure it all out, the film’s shocking twists will surprise even the most careful observer.

The film also closely follows the protagonist, rarely showing us something that he hasn’t seen himself. It’s in this connection to Chris that the film relays most of its humor and suspense. The most horrifying moments are to be found when the camera lingers on a single shot, refusing to cut away. Like Chris, we are forced to helplessly watch as some terrifying force comes running straight toward us without any breaks. It’s a refreshing step away from the jump-scare. Taking advantage of its incredible sound design, this kind of experience also occurs in the much-advertised hypnosis scene in the film. I won’t give anything away, but I can tell you that it’s been a long time since I’ve felt that uncomfortable while watching a movie. The rhythmic and nerve-wracking sounds force you to experience Chris’s stress almost too well. 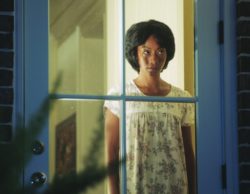 As a character, Chris’s calm demeanor can sometimes come off as a bit bland. But this reserved performance seems more intentional, displaying his ability to deal with the constant racism that’s thrown his way. He just isn’t fazed by it anymore, and his indifference is quite humorous. It also helps us to identify more with his character, as if we are vicariously experiencing his horror. While the other actors and actresses generally do a good job, there are some definite standouts. Lil Rel Howery, who plays Rod, is by far the comedic showstopper. His insight into the crazy events is hilarious and always brings the tone of the film back to comedy. But when it comes to horror, the scene-stealer here is the unnerving and troubled Georgina, played by Betty Gabriel. Her facial expressions and peeled-back smile are enough to make you shudder. Paired with close-up shots that are too much to look at and line delivery that is absolutely haunting, Georgina is sure to become a contemporary — and someday classic — movie “monster.”

But as far as monsters go, there is no bigger villain here than racism. While this review won’t go too far into detail, it is worth mentioning how politically relevant most of the film is. As expressed above, the film always maintains a lighthearted and entertaining demeanor, but its acknowledgement of the issue of racial microaggression and even the principle of eugenics is something to stop and think about. Rarely does this become too overbearing, as the microaggression within the film ranges from clever and subtle to overly blatant and straight to uncomfortably hilarious.

What is perhaps most terrifying about Jordan Peele’s “Get Out” is that its fictional world is only a small satirical step away from the one we live in. Aside from its relevant social critiques, the film stands foremost as an immensely fun and engaging feature. It’s nearly impossible to find anything wrong with “Get Out,” which explains its incredible success with the critics. I can’t think of a single person who wouldn’t have a fun time seeing this film. While it’s not the be-all-end-all Kubrick masterpiece that some people are claiming, it is, however, likely to be the most fun you will have at the movies for a very long time.

Hey thanks Alex! Means a lot man. Excited to see what you have to say about Logan!