The Daily Nexus
Music
BADBADNOTGOOD Bring a Spectacular Show
March 2, 2017 at 5:23 am by William Emmons

The line outside of the venue shuffled slowly through security as an eclectic crowd of guests made their way into Santa Ana’s The Observatory Saturday night to see Canadian jazz group, BADBADNOTGOOD (BBNG). The band has amassed an amalgamation of work with artists such as Earl Sweatshirt, Mick Jenkins, Kaytranada and MF Doom. BADBADNOTGOOD even produced an LP entitled Sour Soul for Ghostface Killah in 2015. Since their origin in 2010, the group has navigated through stylistic expressions of jazz, instrumental hip hop, free improvisation and electronica whilst establishing an iconic and distinct sound.

The venue’s panoptic design arranged the crowd in a way that made the room seem occupied from wall to wall. Well-worn ’90s R&B radio hits played in the background as concertgoers found their spots and conversed amongst each other. At around 8:30 p.m., San Marcos native London O’Connor took the stage with an arrangement of airy and whimsical cuts from his debut album O∆. O’Connor’s lyrics touched on themes of identity, expression and creativity. His closing track, “Guts,” dismantled the notion of a cookie-cutter lifestyle — confronting his suburban upbringing with in-your-face lyricism that is sure to provoke many kinds of thought.

Former member of the Odd Future collective, Hodgy, followed O’Connor’s performance. Hodgy’s set was ominous and overflowing with emotionally charged verses as his raspy words vivaciously filled the depth of the venue. Just behind the DJ booth, Hodgy’s 5-year-old son, Trenton, peeked over its top during his father’s set. The California rapper provided a plethora of songs from his debut LP, Fireplace: TheNotTheOtherSide, and even performed a song over the instrumental of Kendrick Lamar’s “Sing About Me.”

In the gap between Hodgy’s set and BADBADNOTGOOD, more quirky radio hits played in the background mix. Attendees in all corners of the venue danced to the mix as “In the Air Tonight” by Phil Collins boiled up into a climax of irony and laughter. Then, Leland Whitty, the band’s saxophonist, was first to take the stage, dancing toward the front as he played a rendition of The Champs’s “Tequila.” Shortly after, the rest of the band joined to finish the song and commence their performance. 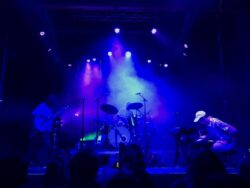 BADBADNOTGOOD kicked off their set with an illustrious blend of unreleased original composition. The rest of the set was comprised predominantly of tracks off the group’s latest album, IV, though a few tracks from III were performed as well. BBNG’s performance style is unique; their peculiarity compliments the intensity of their music in a way that is simultaneously exhilarating and easygoing. Each song appeared to seamlessly blend into the next, most cuts lasting longer than 10 or 15 minutes, respectively. I found myself drifting into the depth of their music, confronted with difficulty in identifying the margins of each track.

The band’s performance of “Kaleidoscope” was intoxicatingly memorable. Audience members sang along with the central riff of the track as the band’s drummer, Alex Sowinski, led his bandmates into a climactic and sporadic peak. At the precipice of this peak, the pit condensed to half its original size until fans broke out into a near-mosh pit; some might find it odd to see people enjoy jazz music so vivaciously. Sowinski’s performance was thrilling; his charismatic presence and tactical skill postulated a loving and humorous ambiance.
In addition to musical exhibition, BADBADNOTGOOD interacted quite a bit with the crowd. Band members encouraged the audience to raise their hands and reach toward the stage as they jokingly pretended to play catch with various attendees. Whitty, the band’s newest member, was arguably the most fun out of them all. For the latter half of the performance, the saxophonist went barefoot whilst parading outlandish facial expressions and body language as he ripped rich notes on tenor sax.

At various points throughout the show, some members would simply leave the set and go backstage to grab a drink for a bit. Even something this overt and abnormal was difficult to pick up on as the remaining members fashioned such a full and encapsulating sound on their own. The band’s original keyboardist, Matthew Tavares, has not performed with the group for some time. Instead, musician James Hill has toured with the group during their latest stint on the road. And, although many argue that the group is incomplete without the original member, Hill held his own and incorporated a distinct style into the outing.

The band’s performance of “CS60,” the outro track from their third studio album, was an energetic highlight of the show. The instrumentation slowly came into focus as deep synthesizers saturated the backdrop of the track until Sowinski began drumming. The hook of this cut sounds like something taken from the score of a blood-pumping thriller flick. An array of unique sounds certainly warranted the animated head-bobbing that was reciprocated by the crowd.

Although BBNG may be characterized as a jazz band, the boundaries of their sound do not by any means fall within the traditional confines of jazz as a genre. The ever-illustrious personalities of the band members exhibited one of the most energetic live performances I have ever seen. It is no surprise that this group has had the privilege of working with such prominent musical influences as they have. Few bands can provide the same magnitude of excitement, confusion and eccentricity as BADBADNOTGOOD.