The Daily Nexus
Sports
Gauchos Sweep Tulane in First Three-Game Series at Home
February 27, 2017 at 5:11 am by Jorge Mercado 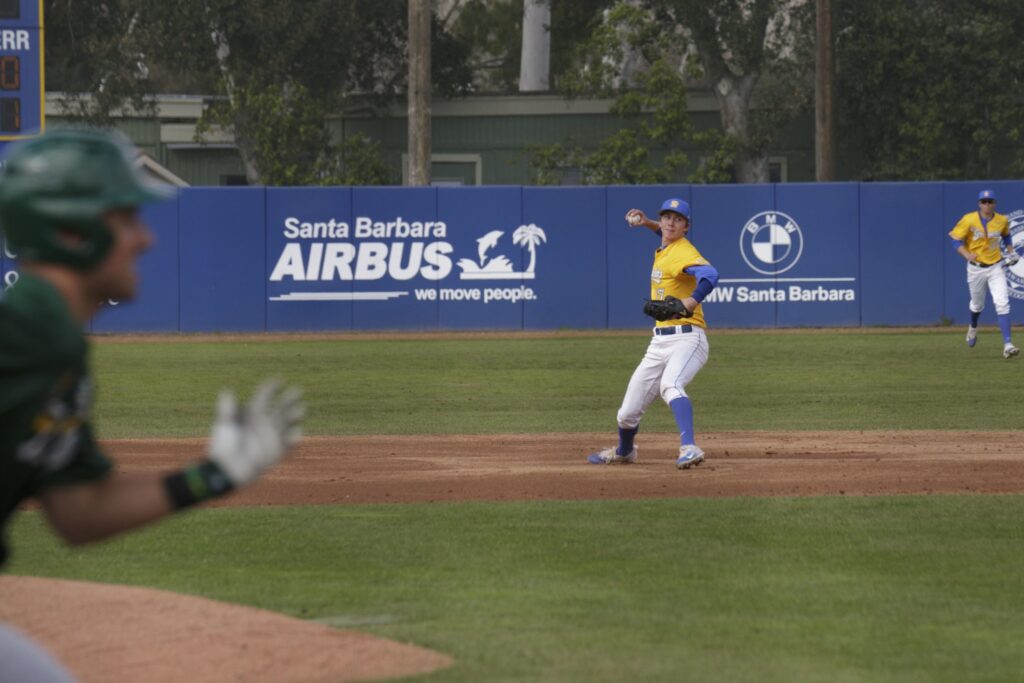 Clay Fisher picks up a ground ball and throws it to first base. Dustin Harris / Daily Nexus

Coming into this series with a 1-3 record, no one could’ve expected the fireworks put on by the UCSB baseball team in all facets of the game all culminating to a successful three-game sweep of Tulane to put the Gauchos right back on the map as a team that certainly has the potential to win it all.

After the weekend series, Santa Barbara now finds itself above .500 at 4-3 for the first time since winning its first game of the year versus LMU. Despite having some solid performances, Tulane is now 1-6 to start the year and is now losers of six straight ball games.

Each game this weekend had a different story, but all had the same outcome: a gaucho victory. Sunday’s match was certainly the most entertaining of the three as the game came down to the wire with UCSB delivering the knockout punch in the bottom of the ninth inning courtesy of sophomore catcher Thomas Rowan.

The scoring began early as in the first inning, the Green Wave had pitcher Joe Record on his heels as a RBI single from senior outfielder Jarret DeHart made the game 1-0. Record then proceeded to give up a double and hit the next batter to be faced with bases loaded situation with two outs. Like a veteran, the redshirt sophomore avoided getting into more trouble by striking out the next batter. Record finished the game after four innings, allowing eight hits, with three earned runs and five strikeouts.

In the very next inning, senior infielder Hunter Hope gave his team a 2-0 advantage after homering to left field on a solo shot, his second of the year.

The Gauchos would respond in the bottom of the third inning after they began the inning with a walk, and a single to have the runners on first and second. Junior shortstop Clay Fisher continued his brilliant start to the season by knocking in a run with a single. After a strikeout, junior first baseman Austin Bush lined out to left field scoring another run to tie the game at two.

After getting two very easy outs early in the fourth inning, Record looked as though he would be unhittable for the rest of the match. However, the Green Wave hit him with a two-out rally after sophomore right fielder Grant Witherspoon knocked a double scoring a runner from first.

Witherspoon was one of the brightest spots for Tulane this weekend as he went 8-13 on the weekend with three runs and one RBI. Senior Hunter Williams scored his sophomore counterpart in the next at-bat so Tulane could take a 4-2 lead.

The game eventually became tied at four after the Gauchos score one run in the fourth and sixth inning. In the ninth, it looked as though Tulane would salvage a game from UCSB after taking a one-run lead after a ball got passed, Rowan. Before that, junior Colton Burns misplayed a ball in the left field near the foul line which allowed the game-leading run to take third and subsequently score.

Despite that, UCSB fought back in the bottom half of the final inning. Senior utility Billy Fredrick was called up to pinch hit began the inning with a single. After a Fisher, bunt turned error allowing him to take first, and a Cohen walk, the Gauchos had the bases loaded with no outs.

Bush came in and delivered the game-tying run with a single to left field setting the stage for Rowan to be the hero. After an earlier mistake in the top half of the inning, the sophomore catcher made amends with a straight shot single down the middle gap bringing in a run and giving his team the sweep.

Sunday’s win was truly a great way to end the series, but the victory on Saturday was certainly just as sweet as behind two home runs from Cohen, UCSB trounced Tulane 14-1 to get back to .500 on the year.

The game certainly looked to be decided early as the Gauchos put forth a three-run first inning, followed by a four-run second inning to take a commanding 7-0 lead after two complete.

In the first, Cohen accounted for all three scores after blasting a three-run shot to right field. In the second, Fredrick knocked in two runs with a single followed by teammate redshirt sophomore Tommy Jew knocking in two more as well. Fredrick finished the day with an impressive 3-3 outing with four RBI’s and three runs. Bush, who had been struggling previously, also had a big day, finishing the day 3-4 with two RBI’s and a solo home run.

In the pitching department, junior Kyle Nelson (1-1) had a tremendous second outing throwing five full innings allowing only two hits, one earned run while striking out four. Being known primarily as a reliever in the past, the Gauchos hope that his stamina continues building steadily so he can continue this dominant run.

Setting the stage for a tremendous weekend, the Gauchos were able to put a stop to their three-game losing skid on Friday with a beautiful 7-4 victory as they jumped out to the early lead and kept a strangle on it until the end.

Both teams were scoreless through two, but UCSB began the scoring in the bottom third with a three-run frame courtesy of Fredrick’s RBI single, and Cohen’s two-run single.

Tulane scored two runs in the top of the fifth, but never got enough offensive firepower going to truly make a comeback giving the Gauchos their first win of the season at home.

Overall, this weekend was a solid one for the ‘Chos. They were able to sustain both offensive and pitching power throughout the weekend and got three quality wins over a team that has solid talent. Sunday’s win, in particular, proved that this Gaucho team has the capability to do what it did last year, win close games.

Last year, UCSB was 17-4 in one-run games. Being able to sneak a victory is nothing short of spectacular, and this is something Santa Barbara will need to continue doing as the year progresses.

The Gauchos next game will be against St. Mary’s on Tuesday at Caesar Uyesaka Stadium.