The Mary Nutter Collegiate Classic started and ended with losses for the UCSB softball team, as the previous weekend’s winning record proved to be a false glimmer of hope for the now 4-10 Gauchos. 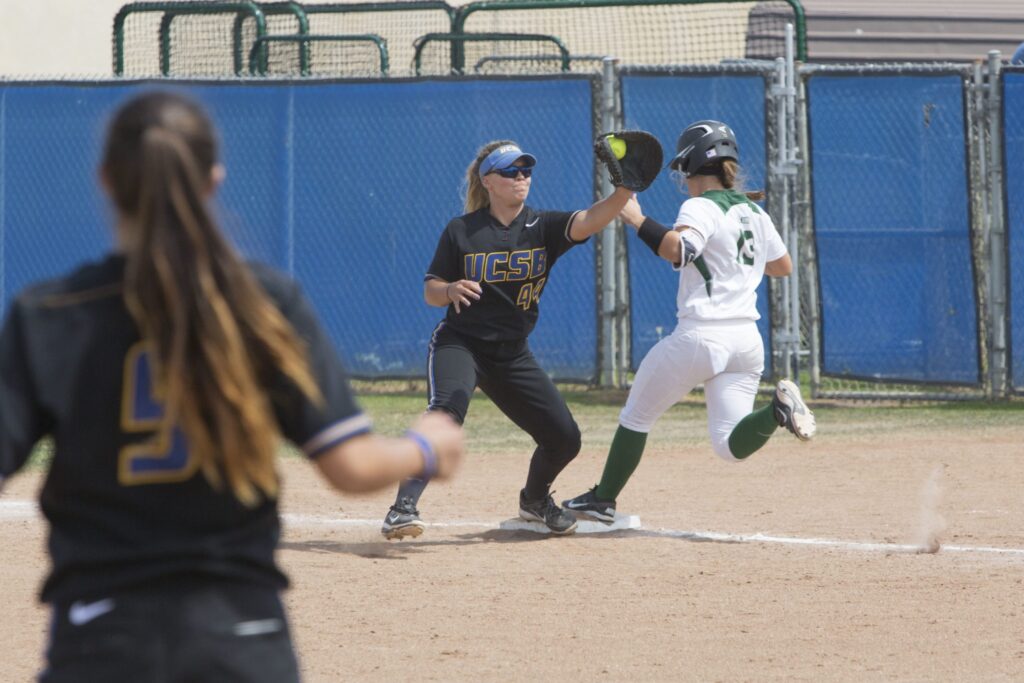 The action started Thursday afternoon with losses of 4-3 to Oklahoma State and 8-3 to Tennessee, followed on Friday by a 6-4 loss to Purdue. Defeating Missouri Saturday evening was the one bright spot in the Gauchos’ weekend, eking out a 6-5 victory before concluding the tournament on Sunday with losses to Washington and Arizona State by scores of 10-2 and 8-0 respectively.

A beautiful afternoon in Palm Springs was the backdrop for the toughest loss of the weekend for the Gauchos, a game in which they lead or shared the lead until the bottom of the sixth inning. Veronika Gulvin started and went the full six innings for UCSB, a decent effort for the sophomore who surrendered four earned runs and finished with a hefty WHIP of 2.00.

Oklahoma Head Coach Kenny Gajewski took out his sophomore starting pitcher Barbie Biggerstaff midway through the first frame, replacing her with junior Whitney Whitehorn, who would go on to toss four-and-a-third scoreless innings.

After a pair of walks in the top of the fourth, the Gauchos were able to break a 2-2 tie during an odd sequence of events that included freshman infielder Kayla Krantz striking out, freshman catcher Kaitlin Barry getting thrown out at second base and Genesis Ramirez, another freshman infielder, still coming in to score from third.

Two runs on a trio of Cowboy singles was the nail in the coffin for UCSB. However, as freshman Logan Simunek — who relieved Whitehorn in the sixth inning — forced a ground out, pop out and strike out to end what would be the Gauchos’ closest loss of the weekend.

Freshman Felisha Noriega took the mound to face the Volunteers Thursday night, and though she was able to accomplish the second complete game by a Gaucho pitcher on the day, her eight runs allowed (six earned) — especially the final five, which all came in the fourth inning or later — proved to be all Tennessee needed to pull out an 8-3 victory.

Freshman infielder Alyssa Diaz was the star of the game for the Gauchos, going 2-3 with all three of UCSB’s RBI, including a first-inning, two-run blast over the left field wall. Tennessee’s junior shortstop Meghan Gregg was there to outdo her, though, batting 2-4 with a home run, double and four RBI on the evening.

Tennessee sophomore Matty Moss improved her record to 6-0 on the season (half of the Volunteers’ wins after Thursday’s contest), throwing all seven innings, striking out 10 batters and allowing only five hits and no walks.

UCSB played another tough one against Purdue Friday, in which a neck-and-neck game was blown open in the top of the fifth with a flurry of Boilermaker scores. The four-run outbreak, centered on a bases-loaded double by junior catcher Kaylah Hampton, all but guaranteed the Gauchos’ third loss to start the weekend.

The Boilermakers’ inferior record (this victory was only their second of the season), made this loss particularly painful for the Gauchos, especially since their bats were just beginning to come to life.

Sophomore infielder Sierra Altmeyer rocked a second-inning solo home run, while Diaz was able to accumulate a double and an RBI for the second-straight game. Junior right fielder Jessica Johnston also grabbed a double of her own, and redshirt freshman Whitney Pemberton hit home a baserunner for only the fourth time this season.

Santa Barbara finally got a positive result Saturday night, earning victory in a miraculous, comeback fashion. Down three entering the seventh and final inning, two of the first three Gaucho batters were retired on infield groundouts, but senior outfielder Stacy Cavazos was able to make her way on base after being hit by a pitch.

With two outs on the scoreboard, the magic began. Jessica Johnston singled, advancing Cavazos to third, and after a ball hit to left field by Diaz, both went on to score on an error by sophomore Raime Cohen, who’d just subbed in to begin the inning.

Altmeyer came to the plate with the Gauchos down two and Diaz on second base. With the game on the line, she crushed a pitch from sophomore Danielle Baumgartner into the left-field bleachers, finally assuring the Gauchos their first victory of the weekend. The two-run shot was Altmeyer’s second of the day and third in the past two games, though surprisingly those are her only three of the season.

UCSB lost in five innings in both of its Sunday matchups, falling 10-2 to the Washington Huskies and 8-0 to the Arizona State Sun Devils.

Noriega couldn’t make it through the first inning of the Washington game, forcing the Gauchos to look past Noriega and Gulvin to freshman Lilliana Rodriguez and junior Lena Mayer, UCSB’s two lightly used pitchers. The duo surrendered nine runs (eight earned) in just three and a third innings.

Gulvin was back to start the Arizona State game, but after allowing a two-run home run and hitting a batter in the second frame, the ball was again handed to Noriega, who went on to let in five more runs. She finished the next three innings, but the Gauchos’ complete inability to generate any offense sealed their fate and concluded a disappointing weekend for UCSB.

While there have been glimpses of power hitting, consistent play and strong pitching for the Gauchos, this team has a long way to go if they are to climb back to the .500 mark and make 2017 a winning season. The team cannot continue to allow opponents such drastic, early leads, and the lineup must start generating more extra-base hits.

The Gauchos hope March has clearer skies in store, and will begin their climb back to success against Utah Valley, Iowa State, Nevada, Southern Utah and Nebraska Omaha next weekend at the St. George Red Desert Classic.