The UCSB men’s basketball team had a great senior night in celebration of senior guard Eric Childress, culminating in a win over UC Riverside. UCR has recently dropped to the No. 8 spot in the Big West, just above UCSB with a 7-19 overall record and 5-10 in the conference. Santa Barbara still sits at the bottom of the Big West at 5-21 this season and 3-11 in conference play. 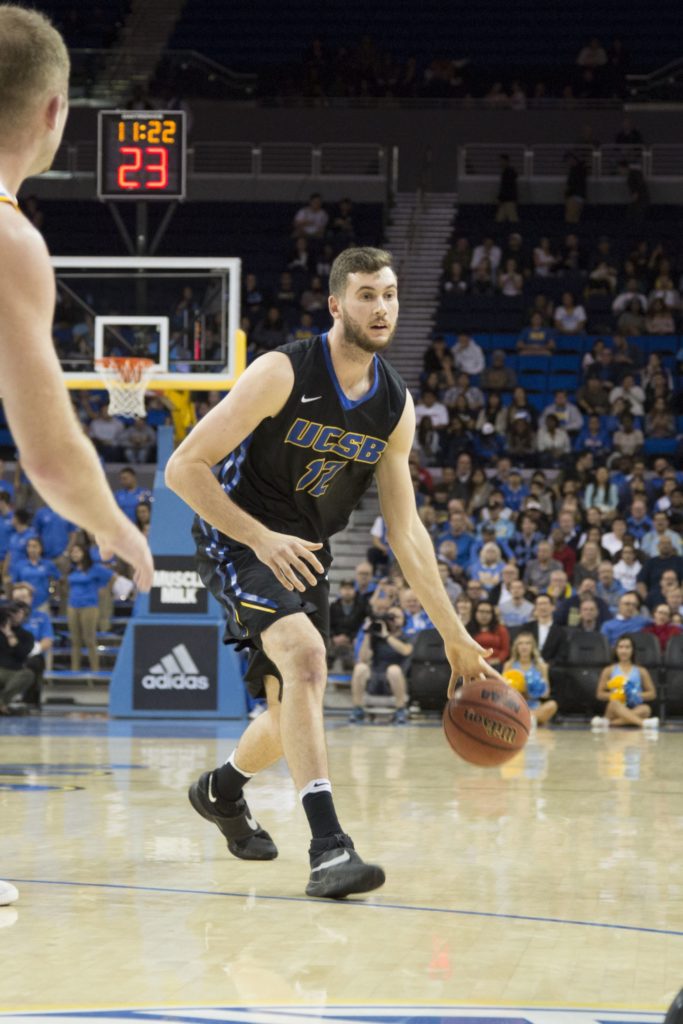 As this was UCSB’s home season finale, the home fans were excited and came in numbers, with 1,618 in attendance that night. After a brief ceremony celebrating UCSB’s sole senior, the game got off to a quick start with Highlander junior forward Alex Larsson scoring in the first 30 seconds.

At 6’10”, Larsson barely had to jump to get the ball in the basket. Although both teams racked up points quickly, raising the score to 20-11 UCSB by 12:30, the Gauchos did a great job of keeping a tight defense. By preventing UCR from driving, UCSB defense was able to keep their score down, but was having trouble guarding the outside three pointers.

This night was a celebration of Childress, and whether it was the team’s energy or the fact that it was going to be his last game at the Thunderdome, he was on a roll. Scoring a total of 21 points, he went 4-4 on his first four three pointers and ended up 5-8 overall on threes.

“You have to work as hard as you can because time flies by and it’s not going to wait for you,” Childress said.

With Childress on fire and Gaucho defense looking strong, the only slight improvement possible was getting more shots off. The UCSB team was on the same page, had great ball movement and knew where everyone was on the court.

One effective Highlander tactic utilized throughout the entire game was a hard press. With the Gaucho point guard and one or two other players covered and searching for an open pass, UCR efficiently ran down the UCSB shot clock, giving the Gaucho offense only around 15 seconds to shoot rather than the usual 30.

UCR senior forward Secean Johnson did not have as great of a half as spectators might have expected. Only putting two points on the board, he was all over the court and takings sloppy shots during the first half, but found his stride in the second period.

The Gauchos played the first half guns blazing, leading by up to 12 multiple times. For the majority of the half UCSB was able to hold onto a 10-point lead.

Gaucho sophomore forward Jarriesse Blackmon had a great game, both defensively and offensively, even scoring on two separate occasions exactly as the shot clock ran out, sending the crowd into a frenzy both times.

With two minutes left in the first period, UCR stepped up and managed to bring the score within one point, Gauchos leading 32-31.

At the half, Gaucho shooting was at a season high with a 54.5 field goal percentage. 15 of 31 Highlander points were from their bench while on the UCSB side of the court, 15 points alone were from star senior Childress, who had made 5-6 three pointers.

Although he came away with three personal fouls, freshman guard Christian Terrell was an essential asset to the Gaucho victory, not only scoring but also defending.

“Terrell’s defense made a real difference for us,” Head Coach Bob Williams said. “In the first half, we did not play anywhere near as well when he was off the floor.”

Rebounds were bountiful for the Gauchos this game, all players doing a great job of not only getting a first hand on the ball but keeping possession and working as a team to move it up the court. Junior forward Alex Hart was all hands, grabbing an impressive 15 boards this game.

Offensively, freshman guards Max Heidegger and Clifton Powell made big runs. Both had the ability to work from either side of the court and shoot from outside. Powell specifically had a great night, especially after a foul that resulted in Highlander points. He turned up the energy and even made a glorious shot from a couple feet outside of the three-point line.

“In practice, I’ve been working on catching and shooting,” Powell said. “My primary game is getting the ball to the basket.”

Despite Highlander efforts to catch up to the Gauchos, UCSB was able to keep their lead until the very end. Winning 68-61, the game ended in style with a flying dunk from Terrell.

The best part of the night was the last minute of the game. Starting with a few fans in the student section and quickly spreading to the entire events center, an “Eric Childress” chant began and continued until the end of the game, with all Gaucho supports on their feet.

Overall, it was a great Gaucho performance and a fantastic senior night for Childress. The Gauchos will next face Cal State Fullerton on the road on Thursday, March 2 at 7 p.m.