The regular season is nearing its end as there are just three games remaining on the UCSB women’s basketball team’s Big West schedule.  Upon entering March, Santa Barbara is in need of a win as it has descended within the conference standings each week and has lost four of its last five contests.

UCSB will play in its final road game of the season, which will be the last of four away games in a row. 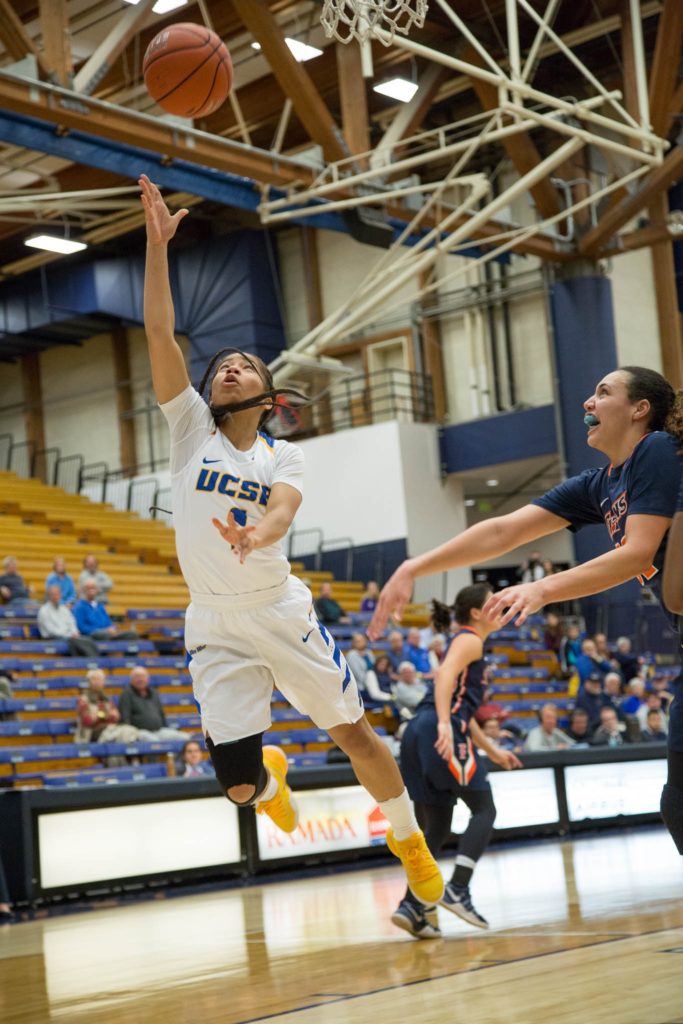 Losers in both of its games last week and currently 12-14 and 7-6 in conference play, the Gauchos have an opportunity to gain some much needed momentum before closing the season at home in their final two matchups.

Most notably, UCSB has the chance to pull off one of the biggest upsets as it will face the Big West’s top team in UC Davis this Saturday in its only game this week. The Aggies have won six consecutive games as their 19-6, 10-2 record matches their finish from last season.

Holding a one-game lead for first place over Long Beach State, which is responsible for its two conference losses, UC Davis will play Cal Poly before hosting UCSB in its final home game of the year. If UCD manages to win its seventh straight, it would tie the longest streak in the program’s Division I history set back in both 2008 and 2010.

The path to upsetting the Aggies will begin with the Gauchos’ ability to protect the ball. UCSB is coming off a season-high 26 turnovers in its loss to Long Beach State, in which it was outscored 35-13 in points off turnovers. It was the sixth time this season the Gauchos turned the ball over 20-plus times, but the first since Dec. 19 in their win over Texas A&M Corpus Christi.

While the defensive pressure of opposing teams must be accredited, oftentimes UCSB’s turnover troubles result from self-inflicted mistakes such as forcing passes in the lane and paint that result in steals, wasted possessions that go out of bounds or the mishandling of passes.

During the team’s 1-4 standing in its last five games, UCSB has continuously struggled with its three-point shooting. Over the span of games, Santa Barbara has accumulated a 21.4 average from behind three-point line, finishing with an 11.8 percentage in its last game after a 2-for-17 finish from beyond the arc.

The Gauchos could use an improved three-point shooting performance from redshirt sophomore Sarah Porter.

Despite shooting a Big West fifth-best 39.2 percent from three-point land and having the third-most made three-pointers in the conference at 56, Porter has only shown glimpses of her once consistent long range shooting.

She began the Gauchos’ five game slide with a disturbing zero points and 0-of-8 shooting outing and hasn’t been able to make much progress since. Currently shooting 25.6 percent from behind the perimeter, Porter has only managed to achieve double figures in scoring twice, and she is coming off her second-lowest career total of two points.

Still, the team’s go-to scorer remains a primary option as her 56 made three-pointers are tied for sixth-most in a single season in UCSB women’s basketball history. If Porter can manage to get the three ball to fall, it could be very beneficial as the Gauchos are 6-1 during conference play when she makes three or more three-point baskets.

UCSB will need to capitalize upon any scoring opportunity it can get as it prepares to face arguably the most dynamic team in the Big West.

UC Davis, who last won a Big West title in 2011, has made itself one of the conference’s few teams favored to lock up the No. 1 seed and possibly win the Big West Tournament. Another win could have major implications as the 2010-11 season also was UCD’s last 20-win season.

Davis is one of three Big West teams this season to hand UCSB its largest deficit in a loss of 14 points. The two teams last met on Feb. 4 when redshirt sophomore forward Morgan Bertsch tied her career-high of 27 points to lead the Aggies to a 62-48 victory.

Bertsch currently ranks third in points per game and fourth in field goal percentage in the Big West with averages of 16.7 and 52.7, respectively. Three of her eight 20-point games this season have occurred in the Aggies’ past four games.

As the team’s top scorer, Bertsch is able to score in the paint and stretch the floor with her midrange shooting, benefiting from behind the perimeter is the junior duo of forwards Pele Gianotti and Dani Nafekh.

The pair of long range sharpshooters complete Davis’ trio of double figure scorers with Nafekh averaging 11.3 PPG and Gianotti at 10.6 PPG. Both are within the top five in the Big West in three-point percentage, as Nafekh sits atop the conference at 46.5 percent while Gianotti is sixth at 38.5 percent.

UCSB held UC Davis to a 12.5 three-point percentage earlier in the month on 2-of-16 shooting.

Upsetting the Aggies at home will be a difficult task as they have won 14 of their last 17 home games. Most notably, they have not trailed in a game since the second quarter of their win over Cal State Fullerton back on Jan. 28.

Despite facing arguably the best team in the Big West, UCSB must focus on its defensive approach as that will help it produce on the offensive end.