The Daily Nexus
Features & Essays
KCSB: The Station Behind the Fun-Drive
February 23, 2017 at 11:38 am by Christian Watts

KCSB’s annual Fun-Drive ends this Friday, Feb. 24th. With only $6,000 dollars to go before this year’s goal is reached, every donation helps to keep Santa Barbara’s only non-commercial, community free-form radio station alive.

With less than a week left in their annual fund drive, it was only appropriate to take an in-depth look into behind the scenes operations of KCSB, our on-campus, fifty-five-year-old local radio station. Situated in the plaza below Storke Tower, the station depends entirely on volunteer help and donations. Artsweek arranged an interview with KCSB’s General Manager, Ally Gonzalez, to see how the station is doing during such a hectic time. Collected, energetic, and incredibly patient in answering all of my nosy questions, Gonzalez is the embodiment of KCSB’s warm vibe. She’s hip, passionate about music and her local community and stuck somewhere in a perfect balance between professionalism and humorous enthusiasm.

She leads me into the front lobby, where I feel comfortable enough to throw my raincoat on the couches, which appear to be ripping at the seams. Music pumps through the tight corridors, bouncing off the walls like the back of an edgy rock venue. “We’re trying to make our listening station look prettier,” she says. But I don’t mind. It bleeds character.

The tour begins in a side office where vinyl is being digitally transferred to a computer. Like these records, most of KCSB’s catalog comes from purchase or by donation from longtime fans that want to add to the station’s collection. To purchase music, KCSB relies on building credit with local record stores, like Warbler Records, but sometimes travels all the way to Hollywood, bringing “buckets” of music to sell at Amoeba. By selling the music they don’t need anymore, KCSB is able to purchase new music that they do need. Even if that means caravanning 90 miles to do so.

In order to figure out what the station needs to buy and add to the catalog, purchases are determined by the Music Library Committee, lead by specific leaders based on music genre. With around 100 programmers at KCSB, all of whom are volunteer based, there has to be some sort of order. Subcommittees within the Music Library Committee are formed in order to categorize all of the volunteer work. DJ’s that lead a section, whether it be for rock or for jazz, will have had enough experience and insight into their genre to know what music needs to be acquired for the station. Of course, this music has to fall under KCSB’s independent educational mantra, to avoid promoting commercial music. Many of the volunteers however are still in training, so Gonzales decides to lead me to the trainee room, but gets distracted on the way by the music playing through the speakers. “Sorry he’s playing a really cool song.”

We then go into the KJUC studio, KCSB’s AM frequency, set up as a part of their quarter-long training program for students and community members looking to someday host their own individual show at KCSB. Here, the trainees get experience with “turntables, CD’s, the mixing board, and prerecorded content.” Not only do they get hands on experience, but the trainees also get to learn the difference between commercial and non-commercial radio, as well as gain insight into how the Federal Communications Commission regulates on air broadcast. “It’s a full broadcast and journalism 101,” says Gonzales. We wish the trainee luck and continue on our tour.

We turn the corner of the narrow hallways and arrive at the station’s music library. Rows of metal bookcases are filled with CDs and vinyl. It’s a large collection for how small the building is and easily fills up what would have otherwise been the largest space in the building. Gonzalez grips a vault-like-wheel that looks like the hatch of a submarine, and cranks it to shift the bookshelves over. The racks were originally meant for books, but as Gonzales stresses, a five-year plan is currently in motion to eventually better organize and categorize the station’s catalog. They had just gotten their first librarian three or four years ago. Before that, the music directors had to clean up after 80-odd programmers, in addition to their negotiations with labels and distributors.

Reggae floods the halls as we head into a booth, where Chris, a volunteer for 16 years, DJ’s his set-list, which he seems to have misplaced. Chris doesn’t professionally work in radio, in fact, this is just a passion project of his. It is passion project that he’s kept up for sixteen years, which shows the dedication that the community has for KCSB.

We then head to the very back, where two volunteer programmers are taking donation calls. This is part of the work the volunteers do to eventually become programmers. A huge chart hangs on the wall, coordinating all of the volunteers, and organizing how they’ll help the fund-drive. The drive happens only once a year for ten days. It’s pretty much the bulk of the fundraising done by KCSB. Gonzales says that they’ll occasionally put on a large event with a special guest, to rake in some extra revenue. Last year’s guest was Amy Goodman from Democracy Now! All ticket sales went to KCSB, but students still got in for free, and the non-student attendees only had to pay a small amount. They keep the majority of their fundraising locked to this one event in order to make everything “as free as possible,” for community members and UCSB students. 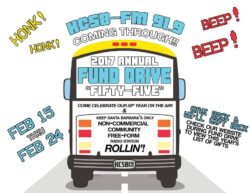 KCSB’s goal isn’t just to provide entertainment, but also to provide training in radio, educational outlets, and community unification. KCSB works as a community member itself, trying to figure out what’s missing from entertainment in the local area. According to Gonzales, KCSB asks itself, “what can we do in terms of events, to add to a local culture?” Gonzales continues, stating that KCSB is “trying to support new cultural experiences as much as possible, and making them as free as possible.” For example, they are currently looking into bringing a musician from Niger, West Africa, for their Hello World cultural music festival. “When is anyone in Santa Barbara going to be able to hear Desert-Blues from West Africa, from someone who’s deeply a part of that culture?”

Gonzales then points out to me that not only are the station’s volunteers members of the local community, but also esteemed and revered “legends.” Richard Flacks, a sociology professor at UCSB, has been programming at KCSB for over thirty years. The recently deceased Cedric Robinson, an incredible scholar and former head of the Black Studies and Political Science departments, started the KCSB program Third World News Review, which brought third world issues that would have otherwise been unheard of, straight to Santa Barbara’s front door. Gonzales couldn’t be more clear that KCSB is not solely a “unidimensional media entity.”

“I would want to invite any student to come and be a part of this station,” said Gonzales. KCSB is, “and we as UCSB students are extremely lucky to have a place like this, a platform that has no owner.”