Offensive struggles continue being an issue for the UCSB baseball team as the bats were unable to catch any momentum against Cal State Bakersfield, dropping the decision 2-1 late last night in the Gauchos first midweek game of the season.

Santa Barbara now drops to 1-3 on the season and on the road since all four games have been away from Caesar Uyesaka Stadium. Cal State Bakersfield breaks a two-game losing streak and claws its way back to .500 at 2-2 after a tough home victory. 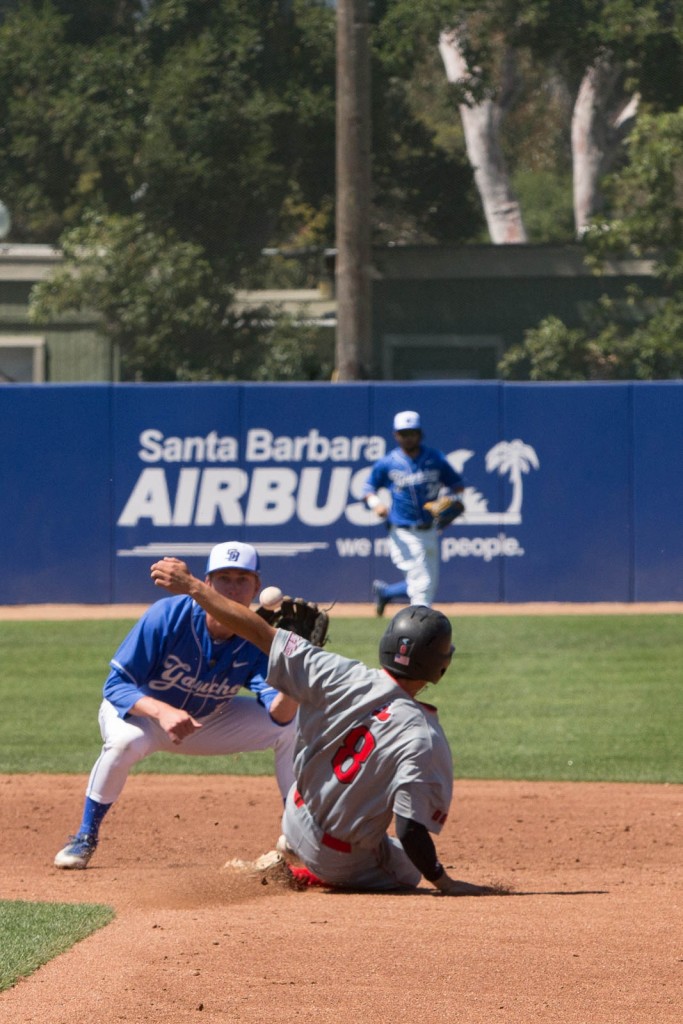 Dropping it’s third straight match was bad enough, but the real disappointment for UCSB on Tuesday was the lack of offensive success that continues to plague this team who has only scored nine runs in four games. Last season, Santa Barbara amassed a total of 34 runs through it’s first four games.

Last night, the Gauchos were only able to tally four hits, one RBI and three walks on the evening while falling victim to two strikeouts courtesy of pitchers Isaiah Moten, who had a terrific outing, and Naithen Dewsnap.

After throwing a scoreless first inning, junior pitcher Chris Clements (0-1) allowed a lead-off single, walked the next batter and then allowed another single to find himself in dangerous bases-loaded situation with no outs.

Despite this, Clements held his ground and forced redshirt junior outfielder Mark Peña to hit into a double play, allowing a single run to score. Catcher/infielder Jake Ortega then turned loose on a 1-0 pitch count and doubled down the left field line scoring a run and extending the lead to 2-0. The sophomore finished the night 1-3 with the lone RBI.

Although allowing two runs in the second, Clements was nearly unhittable the rest of the way allowing only two hits. However, the junior picked up his first loss of the season after 5.1 innings pitched, allowing six hits, two earned runs, two walks and only registering one strikeout.

Moten, a sophomore who had been solid all day, began to struggle as the eighth progressed. After freshman outfielder Landon Silver took a walk, junior shortstop Clay Fisher singled to left putting runners on first and second with no outs.

After a sac bunt advancing the runners a base, Moten was relieved by Dewsnap ending a solid afternoon’s work. The right-hander finished the evening after 7.1 innings allowing only three hits and one earned run while registering nine strikeouts.

Up to the plate was junior utility Colton Burns who continued his hot start to the season with a single right up the middle scoring Silver and putting Fisher, the tying run, at third with only one out. Burns finished the day 2-2 with a RBI.

Despite this very advantageous position, the Gauchos failed to capitalize as junior designated hitter Austin Bush could not muster a hit or even a sac fly as he struck out.

With two outs, J.J. Muno still had a chance to tie the game, but the redshirt junior continues to struggle as he flew out to left field and was unable to score the tying run. The second baseman finished the night 0-4 and is still hitless on the season through four games as he is 0-14.

After getting out of the tough jam, Dewsnap was able to finish off the Gauchos in the ninth securing the victory for Moten and earning his first save of the season. The junior finished allowing only one hit and striking out two batters.

When the season first began last week, especially after an opening day victory, no one could’ve expected the offensive struggles that are currently plaguing UCSB. However, with the season still in its early stages, there is no need to press a panic button yet.

Also, now that the Gauchos are coming home, maybe the offensive struggles can be corrected behind the roar of a great Gaucho crowd.

Santa Barbara faces off against Tulane at Caesar Uyeska Stadium beginning Friday, Feb. 24, at 2 p.m. for a three-game series this weekend.