The Daily Nexus
Sign of the Times
A Call to Action for the Crisis in Syria
February 22, 2017 at 5:00 am by Ali Abouesh

Here’s a hypothetical scenario: Let’s say you are once again 10 years old. Your life is one of a normal 10-year-old: you ride bikes, play sports after school and gorge yourself on candy when your parents aren’t looking. Life is good and life is normal. You come home from school one day and you see something you have never seen before. Your mother and father are huddled together where you normally sit down for dinner. Your mother’s head is buried in the chest of your father’s. They’re both sobbing; before now, you have never seen your parent’s cry.

The Syrian Civil War began six years ago in 2011, so a 10-year-old child at the time would now be 16 if they were lucky enough to survive. When I was 16, I was worried about whether or not I would pass my driver’s license test, not about whether or not I was even going to live to see the next day. It is especially tragic because the civilians did not ask for this war and yet they are the biggest victims of it. They have been bombed, they have had chemical weapons fired upon them, and they have essentially been subjected to hell for almost six years. It is sometimes easy to forget since they are so far away, but people in Syria are not so different than people from here. Before the conflict, young Syrians went to university; they went out with friends on Friday nights and they fell in love with people they probably shouldn’t have fallen in love with. So if the people of Syria are so much like us, then why are we ignoring what they are going through?

The question of whether or not to help Syrian refugees has become a hot button political issue instead of a question of basic human decency. This is not the first time we as a country have failed to do the right thing.

Even though I began with a hypothetical scenario, the situation in Syria is far from hypothetical. The question of whether or not to help Syrian refugees has become a hot button political issue instead of a question of basic human decency. This is not the first time we as a country have failed to do the right thing. In a 1939 poll conducted by Gallup, 67 percent of Americans opposed accepting 10,000 refugee children from Germany. Years later in 1946, another Gallup poll conducted after the atrocities of World War II had been well known and documented found that 59 percent of Americans still opposed the resettling of European and Jewish refugees. That seems shocking to think about until you realize we are essentially doing the exact same thing right now. 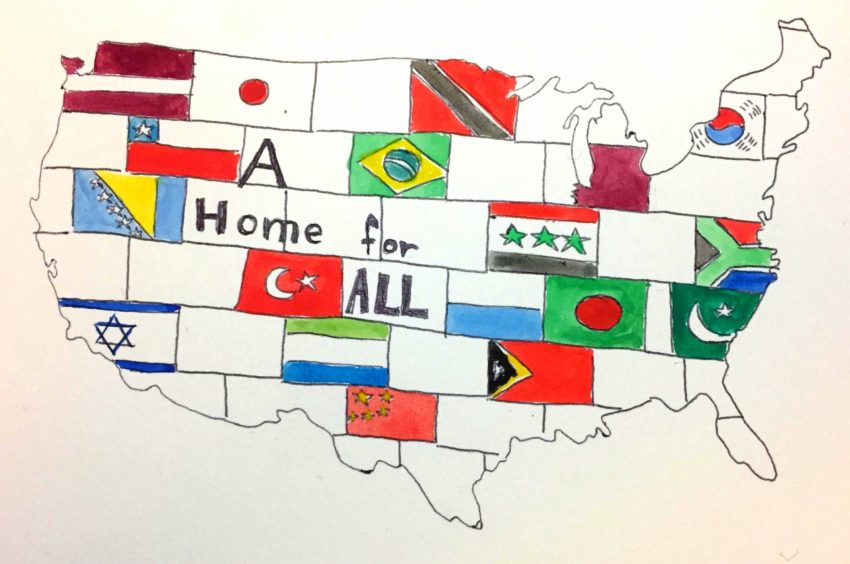 Aleppo, for instance, is the site of one of the worst humanitarian crises in history. We have not done all we can as citizens of one of the most powerful democracies in the world. When France was a victim of one of the worst terror attacks in recent memory, the world extended an arm of support to its people. We prayed for France and we lit our monuments blue, white and red in their honor. We need to show the same support to the civilians of Syria that we showed to France. As citizens of the U.S., we need to use our voices for those whose voices are left unheard. We should not politicize the lives of people who are currently experiencing hell on Earth, especially considering that our country had a sizeable hand in creating that hell.

The Syrian Civil War eventually devolved into a proxy war between the United States and Russia, and it is absolutely mind boggling that we are demonizing the people who are trying to flee from the hell we created. I am not even necessarily advocating that we have to open our doors to anyone from Syria who wants to come here. What I am saying is this: Ignoring the atrocities going on in Syria is unacceptable.

There is more than one way to help. You can donate to the Syrian Humanitarian Relief Fund, advocate to your congressman that we need to do something or even just look up what’s going on and talk about it with your friends. Our own Associated Students at UCSB passed a resolution to help provide scholarships to Syrian students displaced from their own home universities. Whatever way you decide to help, we need to act now before it is too late.

We can no longer be silent or complicit in what is happening.

The West must assist in ensuring the safety of peaceful Middle Eastern people. Immigration to Europe and the Western Hemisphere is not the only option.

Muslims tell us (ad nauseum) that Islam is a religion of compassion. So I have a proposal. Since it is so compassionate we should take a cue from other Muslim countries like the uber-rich Saudis, Kuwaitis, Qatarians, etc., and for every single Syrian refugee these “compassionate” countries take in we match them one-for-one.

If we follow their lead we will guarantee not one single Syrian refugee enters our country. We should be just as compassionate as they and if they cannot even care about their own brothers in need than we know everything we need to know.

Okay. We would be pledging to protect 3.8 million Syrian refugees since that’s how many refugees the predominantly Muslim countries of Lebanon, Jordan, Turkey, Egypt, and Iraq are protecting.