The UCSB women’s tennis team was able to pick up its first two wins of the season over the weekend as it came out victorious in close games against the San Jose Spartans, 4-3, and the Arizona Wildcats, 4-3.

Ending the weekend with two wins improved Santa Barbara’s record to 2-4. SJSU is now 2-2, while Arizona’s first loss leaves the Wildcats at 6-1. 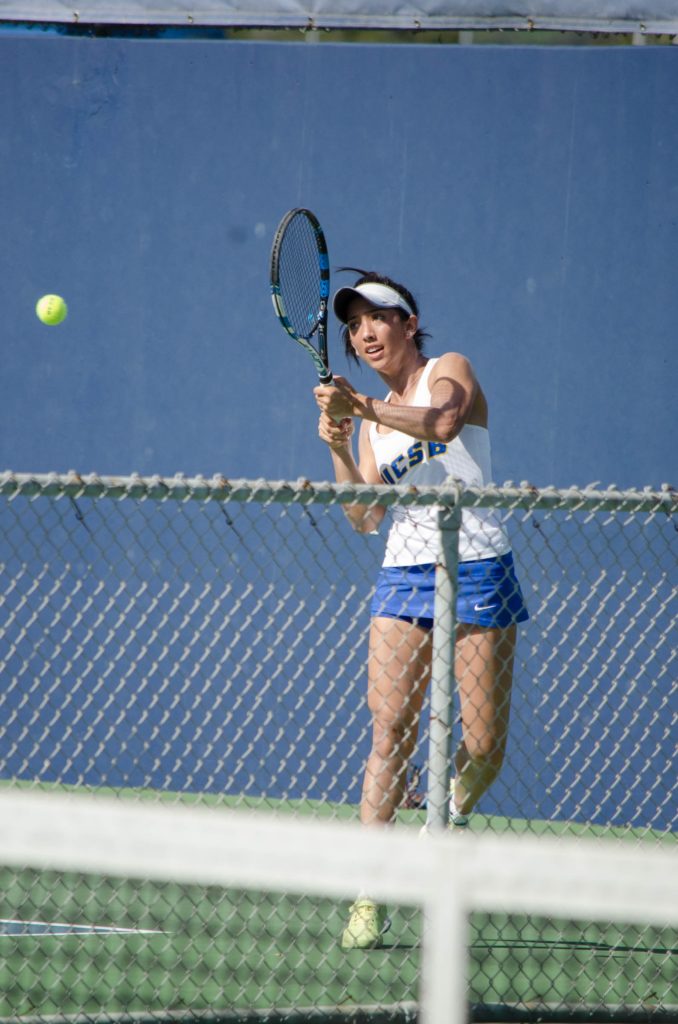 The Gauchos were at home for the first time in nearly a month and their pair of matches began with a game against the San Jose Spartans on Saturday.

The nationally ranked Spartan pair were able to handle Da Silveira and Gilbertson as they went on to win the set 6-3. Play continued with the newly nationally ranked Gaucho pair No. 52 junior Palina Dubavets and senior Stefani Stojic battling against the Spartan double of junior Sybille Gauvain and senior Marie Klocker in an effort to try to respond to the previous San Jose State victory.

Santa Barbara looked to bounce back in singles play and it did exactly that as the team went on to win three consecutive matches, starting with senior Melissa Baker’s victory over San Jose State’s freshman Clara Mantaux 6-3, 6-0.

It was Spartan senior Marine Dans who was able to put a stop to the Gaucho’s winning streak, defeating Gilbertson in a close match that finished with the score of  7-6, 6-4. San Jose State’s Kobayashi continued the rally effort as she was able to come out victorious against Gaucho junior Amanda Atanasson after a hard fought three sets 7-6, 2-6, 6-2.

The meet came down to a match between two nationally ranked players: SJSU’s No. 93 Sybille Gauvain and UCSB’s newly ranked No. 80 Dubavets. The match went to three sets as both players battled to come out on top, but Dubavets was able to leave victorious as she won the decisive final set in a match that finished 7-5, 2-6, 6-4.

UCSB was able to secure its first win of the season in a tough match that wasn’t decided right until the very end. It was disappointed after dropping the doubles point, but the streak mounted by UCSB in the first three sets and finished off by Dubavets was an impressive team effort that truly made them earn the victory.

The Gauchos weren’t able to celebrate for long as less than 24 hours later they found themselves back on the court tasked with defeating an unbeaten Arizona Wildcats squad.

Bouncing back from its loss in doubles play against San Jose State, UCSB was successful in clinching the doubles point to begin its bout against Arizona.

UCSB’s tandem of No. 41 Baker and sophomore Stephanie Yamada started doubles play with a 6-2win against freshman Paris Coley and freshman Marie Van Aelst. The team of Da Silveira and Gilbertson were able to win their set against Arizona’s junior Devin Chypyha and sophomore Camila Wesbrooks 6-2, giving the Gauchos their first doubles point since their doubles victory against Texas Tech on February on Jan. 28.

It was an even tougher matchup against the Wildcats in singles play than the Gauchos had experienced the day before as the two teams were neck and neck. Atanasson got the first victory for UCSB in singles play, defeating Arizona freshman Van Aelst 6-2, 6-3.

UCSB was able to respond with a couple of wins of their own, however, as Gilbertson came back from a 0-6 drop in the first set and finished the game victorious, winning the last two sets 6-4, 6-3. Stojic added to the streak as she won her third and final set, leaving with a score of 7-5, 3-6, 6-2. Stojic’s win gave the Gauchos the victory although Arizona senior Samantha Czarniak defeated Da Silveira 7-6, 6-4. The doubles point became crucial and was the deciding factor in giving the Gauchos their second-straight overall victory in two consecutive days.

The Gauchos’ victory over the Arizona Wildcats ended Arizona’s unbeaten streak, giving them their first loss of the school’s seven matches this season. Ending Arizona’s perfect season capped off a great weekend for UCSB, which saw the team come together after a long road trip to earn its first two victories of the season.

Key to the Gauchos winning their two tough games were Dubavets and Stojic who were both able to secure the deciding victories in singles play,  giving their team the win. UCSB’s doubles play was also a huge factor in the match against Arizona as the doubles point is what allowed the Gauchos to edge out the Wildcats.

UCSB has another slew of games next weekend as they go on the road to three different cities where they will begin conference play against UC Davis and face Saint Mary’s College of California on Saturday, Feb. 18 at 10:30 a.m. and 3:30 p.m., respectively. On Sunday, Feb. 19, the Gauchos will play Fresno State in a meet scheduled for 11 a.m.