The Daily Nexus
Volleyball
No. 12 UCSB Drops Sixth-Straight, Go Winless During Road Trip
February 13, 2017 at 5:01 am by Spencer Ault

Unable to maintain its lead to secure a victory, the No. 12 UCSB men’s volleyball team loss in heartbreaking fashion to as it finished its four-game road trip without a win.

Up two sets to zero and tied at 24 with Stanford in the potentially decisive third set, the Gauchos let the opportunity to land a winning strike slip away when the Cardinals scored twice in a row to win the set. Two Stanford-dominated sets later, UCSB had lost its sixth game in a row, this one perhaps the most painful of the bunch. 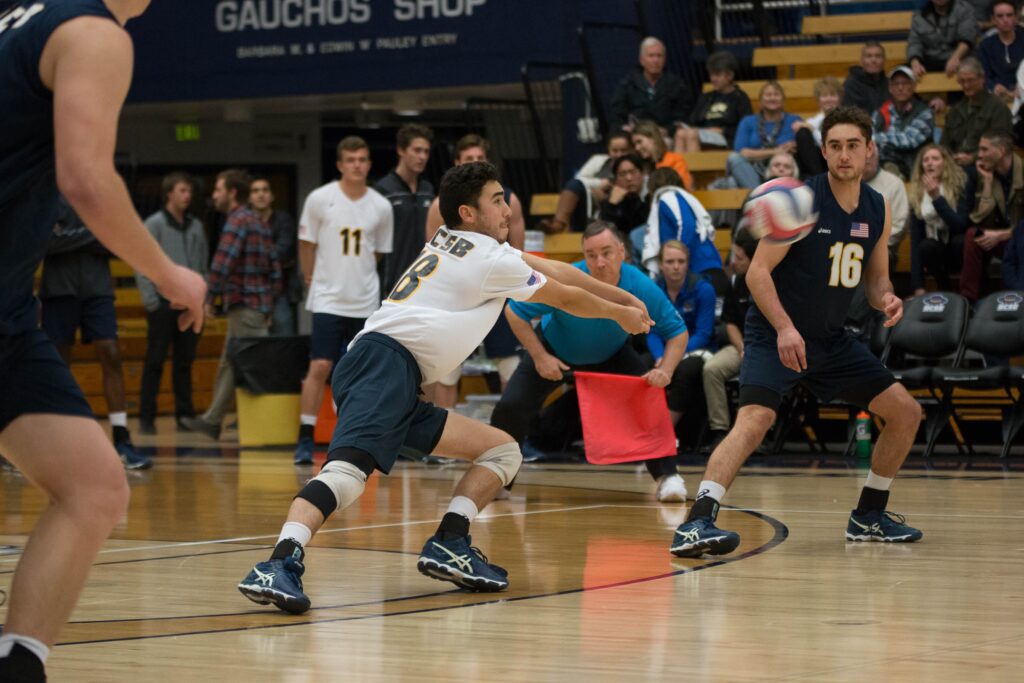 Now 6-7 overall and 3-7 in MPSF play, the Gauchos hadn’t had such a good chance at victory in weeks. Saturday was the first time since a Jan. 20 match against Cal Baptist that UCSB had won two sets in a match. Unfortunately for the Gauchos, that third set proved even more elusive.

UCSB came out of the gate looking determined to break its losing streak. The Gauchos opened up Saturday’s match by going up 8-3, with kills by Jacob Delson, Corey Chavers and Hayden Boehle providing the attack muscle behind the early run.

Just as they would later on a larger scale, the No. 8 Cardinals, owners of an 8-4, 5-2 record, battled back in the first set and held a 21-19 lead in the late action. Three attack errors by Stanford players allowed the Gauchos to claw back into the lead, and Delson secured the 25th point with his fourth kill of the set.

The evenly battled first set was just a light appetizer for the bare-knuckle brawl that was Wednesday night’s second set. Neither team was able to secure the necessary two-point advantage by the 50th point, nor even by the 80th point. It took until the 84th point, when Delson blocked a Stanford attack to give the Gauchos a 43-41 lead, for the second set to finally end. No other set in MPSF play this season has lasted as long.

Unsurprisingly, the third set was a back-and-forth battle as well. The Gauchos never once led, but the Cardinals were unable to push their lead beyond three points at any point. Redshirt sophomore Connor Drake notched a kill off of an assist from setter Randy DeWeese to tie the set at 24 all, but a kill and a block by the Cardinals gave Stanford a 26-24 win.

That 24-24 moment was UCSB’s last real chance at a victory Wednesday night. Stanford dominated the next two sets, winning 25-15 and 15-10. The Gauchos trailed for all but two points in those last two sets, and a late 4-1 run in the fifth set came up three points short.

Unsurprisingly, Delson led UCSB in kills with 19 and added 11 digs to give himself a double-double on the night. Parker Boehle contributed 11 digs as well, while Chavers and DeWeese weren’t far behind with 10 apiece.

DeWeese, as the Gaucho setter, kept the attack going strong with 56 assists, good for 11.2 assists per set. Drake, meanwhile, posted 12 kills and seven blocks in what was by far his best performance of the season.

The Gauchos return home for the first time since Jan. 27 when they take on No. 2 Long Beach State at 7 p.m. on Wednesday, Feb. 15 in Rob Gym.