Aside from celebrating the stars in front of the camera, the Santa Barbara International Film Festival (SBIFF) also takes the time to praise the artists behind it. The Outstanding Directors Award ceremony was held on Feb. 7, with the Arlington Theatre playing host to such acclaimed filmmakers as Damien Chazelle, Ava DuVernay, Barry Jenkins, Kenneth Lonergan and Denis Villeneuve.

As the event began, SBIFF Executive Director Roger Durling took to the stage to introduce the night’s moderator: Pete Hammond, Deadline’s chief film critic. The bespectacled Hammond took to the stage, joking about the rain that had rendered the pavement outside precariously slippery: “I’m from L.A. This is a downpour for me.” 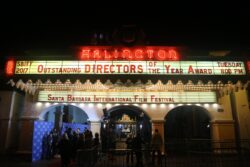 After the laughter died down and a select montage of the aforementioned directors’ work played onscreen, Damien Chazelle, director of “La La Land” and “Whiplash,” joined Hammond onstage. The Oscar-nominated director, only in his early 30s, discussed how initially, he couldn’t get “La La Land” produced because nobody wanted to pour funds into the project. In the interim, he made “Whiplash” to satisfy his urge to put out something creative onto the silver screen. Only after “Whiplash” became a smash at Sundance did the money for his romantic musical begin flowing in.

Ava DuVernay, director of the Netflix documentary “13th” and Martin Luther King Jr. biopic “Selma,” was the next filmmaker to take the microphone. “13th,” which she was being honored for that night, makes the assertion that people of color are being forced into a new slavery in America through mass incarceration. A clip from the film was played, and the audience collectively hissed at a soundbite of Donald Trump damning the Central Park Five. Then, as applause for the film died down, DuVernay appeared onstage, fresh off the set of “A Wrinkle in Time.”

“I love this theater so much,” she said glowingly, recounting that, as a UCLA student with a waitressing job, she would make the two-hour drive up just to watch movies in Santa Barbara.

DuVernay told the audience that “13th” had come about after the success of “Selma.” Netflix contacted her and told her she could make anything she wanted, so she chose to film in secret, a documentary that, in Hammond’s words, “points out that slavery just went to another place.” DuVernay earned the most cheers of the night when she said, “I didn’t think [a black female filmmaker] was possible.” 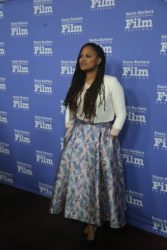 Up next was Barry Jenkins, who for a long while served as the “ringmaster” of the Telluride Film Festival, introducing all the movies making their premieres. After an eight-year hiatus from filmmaking, he made “Moonlight”, a film about a Miami teen struggling with issues of family and sexuality. Its success made Jenkins the first African-American to earn Oscar nominations for directing, writing, and best picture. It premiered, fittingly enough, at Telluride.

“It was cool as hell,” Jenkins said, grinning.

The film, he said, had much personal significance to him and the man who wrote the play on which it was based, Tarell Alvin McCraney. Both of them had cocaine-addicted mothers, and Naomie Harris plays one in the film. Jenkins had to hold his ears backstage so he wouldn’t hear the clip featuring her, the memories still fresh in his mind.

Kenneth Lonergan, writer and director of “Manchester by the Sea” followed Jenkins. The Nexus was able to briefly converse with him:

Wehrung: Why was the setting of Manchester so important to the film and to Lee?

Lonergan:  I guess because of the way the script developed. It started out as an arbitrary choice, and then I did a lot of research on the town. I think just all the elements of the environment of a story can be really important part of it.  If you think of movies like “The Last Picture Show” or “Hell or High Water,” for instance, and “Moonlight” … you don’t want “Moonlight” to be anywhere but Miami, and it really couldn’t be, in a way. It’s a little hard to say why. I think a place has a personality just like a person does, and once you’ve got that personality into the story, it’s hard to imagine it without it.

The film’s (impressively heart-wrenching) story was the brainchild of John Krasinski and Matt Damon, who dropped out of directing and starring duties. The role of the emotionally detached protagonist Lee Chandler ended up going to Casey Affleck, earning him an Oscar nod.

Primarily a writer, Lonergan has been practicing his craft since the fifth grade. He did copious amounts of research regarding the film’s setting, allowing him to incorporate minute details such as that the nearest hospital to Manchester is in Beverly.

“I’m always very interested in the life led [in the places I go.] Everywhere just has a different feel to it,” he said.

Despite the film’s extremely dour subject matter, Lonergan made sure to incorporate some humor into it, as “without the humor, the movie’s dead.”

Finally, there was Denis Villeneuve, who also made himself available for a brief red carpet interview. 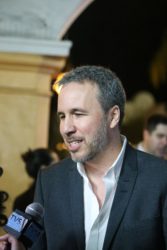 Wehrung: Your screenwriter Eric [Heisserer] came to UCSB a little while ago, and he said he talked to you about things like politics and religion together. Did those conversations influence how you two cooperated on making “Arrival?”

Villeneuve: Yeah, definitely. I spent a lot of time, a lot of coffees with Eric in order to develop the screenplay. I mean, it came with a very strong first draft, and my job as a director is to guide the screenwriter, to move forward, to shape the movie to the way I would love it to be. So, yes, definitely. A lot of conversations helped a lot in building the world we were dreaming of.

Villeneuve, known for directing dramas like “Prisoners” and “Sicario,” said it’s been a long-time ambition to make a sci-fi film, having been influenced by comic books, Steven Spielberg and Alejandro Jodorowsky (who also took a crack at making “Dune,” which Villeneuve is signed on to direct). The problem with modern sci-fi films, Villeneuve said, is that they have a “lack of freshness” on account of being more about the technology than the ideas.

On “Arrival” itself, Villeneuve said, “Amy [Adams] was my muse.  She was my first choice,” and, “For me, the movie was about this woman’s journey and her revelation about death.” One thing he tried very hard to avoid was crafting the film in a way that information would be spoon-fed to the audience.

The evening capped off with (as is SBIFF tradition) all five directors taking the stage to discuss their early cinematic influences with Hammond, with answers ranging from “Star Wars” to Disney. Then “Risky Business” director Paul Brickman took the stage to praise his peers.

“There were two common threads [of tonight’s films]: a strong emotional center and, in this corporate world of ours, these were fiercely personal visions. It gives me a lot of hope,” he said.

Noting that members of the Directors Guild of America had considerably short lifespans, he quipped, “Let’s get these awards out while they’re still healthy,” and the five thus received their very pointy gold trophies from volunteers before standing up for a final round of photos.