The Daily Nexus
Opinion
Syrian White Helmets: Hope in the Face of Death
February 9, 2017 at 5:00 am by Olivia Yazzolino

Looking back on 2016, I remember feeling the knot in my stomach as I watched the election results. I remember crying as fellow UCSB students stood up and said they were scared that their families would be deported, and how shocked I was realizing that my country had supported bigotry, sexism and racism. I came home to my family in early December, and we didn’t even want to put a Christmas tree up. People are scared and they are angry. I am scared and angry. But I still believe in hope and change, perhaps more than ever, and this is why. 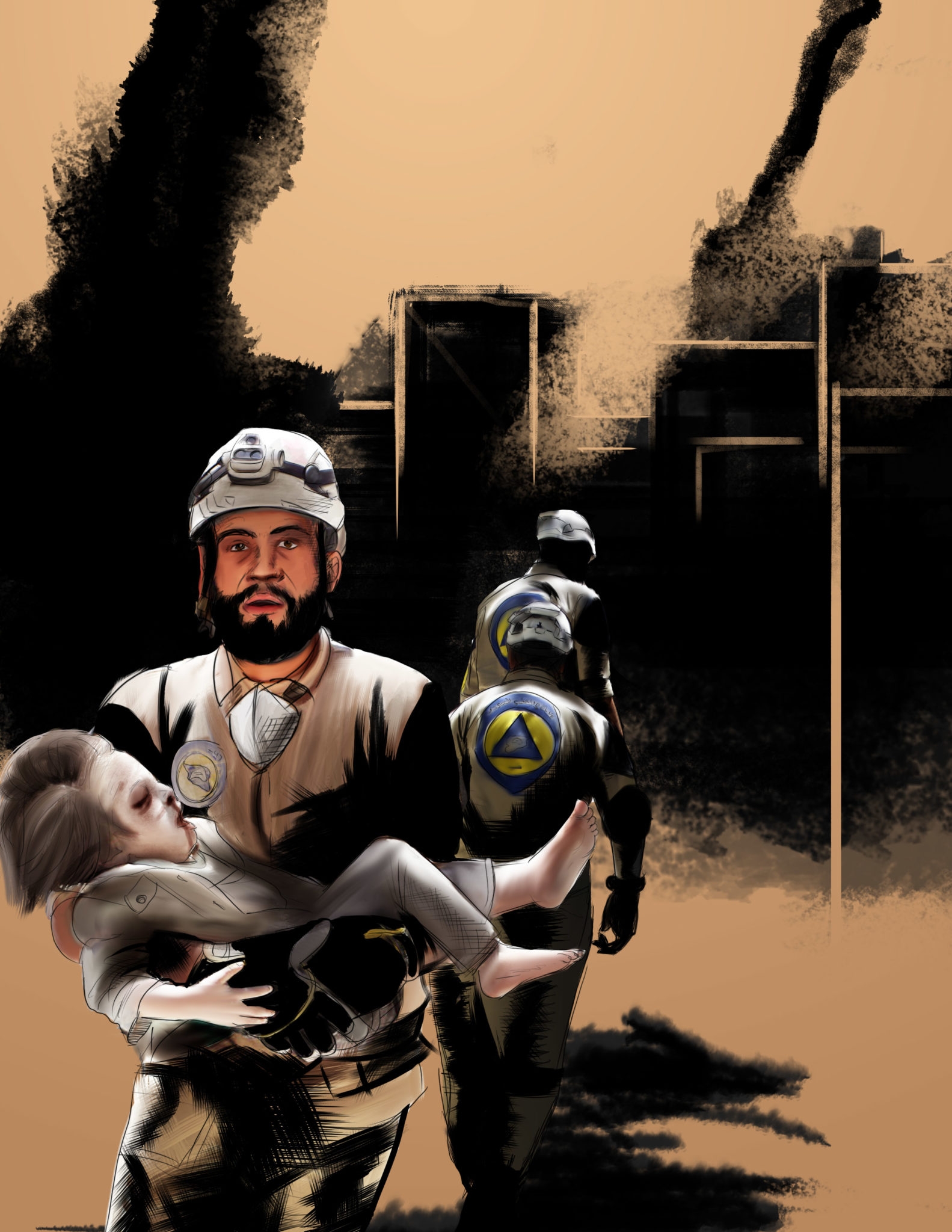 I believe in human kindness because of the White Helmets. In the sixth year of the Syrian civil war, after the near complete destruction of Aleppo and deaths of thousands of civilians, the Syrian Civil Defense continues to save hundreds of lives a day. Also known as the White Helmets, they are a group of volunteers that act as first responders to an area of the city that has been raided. They rescue everyone they can, regardless of which side of the war they fight for. Despite being targets of ongoing air raids, they go back into areas of destruction and remove debris with their bare hands. The group has faced criticism because it rescues terrorists along with civilians, but this only further proves my point. Love and courage exist and discriminate against no one.

The White Helmets started as a group of a few brave civilians who helped search through the rubble after each air raid they were in earshot of. Slowly they joined up, as the couple of brave souls who acted as first responders in the chaos, each in their own respective neighborhoods, began hearing about others who went back into the debris. Today there are over 3,000 of them and they wear white helmets to symbolize freedom and peace. Now that they have received recognition, terrorists have adapted their air raids to return for a second round — a wave specifically targeting the White Helmets. One thousand seven hundred air strikes have occurred in just one week.

The White Helmets are clearly brave, exemplary humanitarians. They have been nominated for the Nobel Peace Prize and received the Right Livelihood Award. What makes me believe in hope and change, however, is that the White Helmets never discriminate — even when, arguably, they should. They save Assad’s troops, ISIS recruits, U.S. soldiers, children. Many have argued that this is counterintuitive to U.S. anti-terrorism acts, but I beg to differ. This is the most effective counterterrorism practice I can think of. The White Helmets, in the face of death and destruction, are a united front where individual civilians once were. They are less divided than ever, and they are growing. If every person lived to help anyone in need, regardless of which side of the war they are on, what gender, class or race they are, there wouldn’t be any air strikes.

These Syrians and all humanitarians working to make the greatest of sufferings just a little bit easier put my concerns and ailments in perspective.

I believe in hope and change because before I reflected on the work of these brave Syrians, I didn’t want to help anybody. I wanted to end my friendships with people who voted for the administration against human rights. I wanted to fold my broken heart back up into its hole and weep over the missed opportunity for a female president, equality and representation. I wanted nothing more than to lock my room up, sign Democratic petitions and fantasize about peace and love. But I don’t have to fantasize. In Syria, in the blood-stained debris of Aleppo, there is peace and love. Each child pulled from fallen roofs is hope and change.

Fearless first responders, in their sixth-straight year of turmoil and annihilation, still turn back time after time to save anyone they can. They risk their lives for anyone — even the people creating this horror. I am always surprised and touched to find that the purest acts of kindness arise in the darkest situations. These Syrians and all humanitarians working to make the greatest of sufferings just a little bit easier put my concerns and ailments in perspective. We so easily lose sight of our purpose here. After seeing the bloodied faces of children being carried out from under buildings while white helmets bob quickly and steadily toward the danger zone whilst others flee, suddenly our grades, our money, our political divisions seem so insignificant.

Olivia Yazzolino believes the Syrian White Helmets are a much needed bright spot in these uncertain times.

The White Helmets might not be exactly what you think they are. Please Google “Consortiumnews The ‘White Helmets’ Controversy”, without the quote marks. “Yet, despite the favorable “group think” regarding the “White Helmets” – and more broadly about the rebel cause in Syria – there is another side to the story, including the fact that the “White Helmets” are not just some well-meaning Syrians who emerged to help all civilians suffering from the five years of war. Not only do they only operate in rebel-controlled areas but they are a source of propaganda about the war, indeed their very existence… Read more »

From Wikipedia — an obviously alternative fact, fake news source — re the White Helmets: “Many journalists and analysts who have investigated SCD (Note: SCD = White Helments) reject claims of malfeasance as Russian/Syrian government disinformation; fact-checking organization Snopes.com has reported that claims of SCD militancy or links to terrorist groups are unfounded, and multiple journalists have raised serious questions as to the credibility and government ties of individuals accusing SCD of such links.[69][70] Many Western news analysts have concluded that the attacks on SCD are part of a systematic information warfare campaign by the Russian government, the Syrian government,… Read more »

Not sure of your intent regarding calling Wikipedia a “fake news” source. But obviously it is open to being hijacked by people with an axe to grind.

As is clearly stated in same the article you quote, major funding for the “White Helmets” is provided by the very governments openly (and covertly) pushing for regime change in Syria.