The Daily Nexus
Science & Tech
How China’s Got It Made Using Trophic Cascades
February 9, 2017 at 3:19 am by Jacqueline Wen

How has China been able to sustain its large seafood catches for the past 20 years despite intense fishing and minimal management measures?

The answer: using the concept of trophic cascades.

While some have questioned the persistent large catch statistics of the world’s largest seafood producer, researchers at UC Santa Barbara’s Sustainable Fisheries Group (SFG) affiliated with the Bren School of Environmental Science & Management have published a study in Proceedings of the National Academy of Sciences that offers a possible answer.

Because each trophic level in a food chain has roughly 10 times as much biomass as its lower level, China’s removal of the predatory fish at the top levels has increased the number of fish in the lower ones.

“Within ecosystems, the central limiting factor in how much fish that you catch is the efficiency of transfer between trophic levels. The basic idea is that if you chop off the top level, it releases the level beneath that. So if you get rid of all the big fish that are eating the medium-sized fish, there will then be more medium-sized and small fish that you can catch and eat,” Cody Szuwalski, lead author and a fisheries scientist at SFG, said. 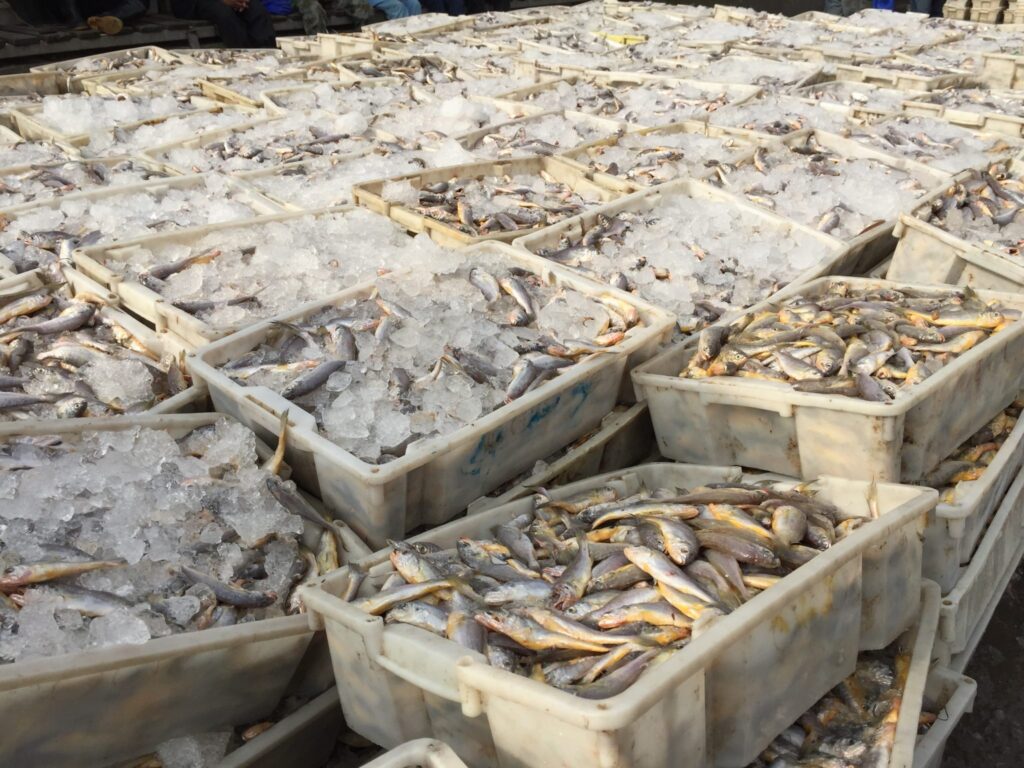 The fish above are small yellow croaker. This species suffered a decline in population after being overfished in the ’70s, but due to China’s fishery management, has grown since then. / Courtesy of Cody Szuwalski

In addition to lessening the number of larger predatory species, China’s fishing practices have caused individuals to be found much smaller than they were before. Commonly found in in the East China Sea, large hairtail can span up to six feet long but are now reduced in size to around two feet.

“It’s clear that when you go into the East China Sea and do a survey there, all of the big stuff is gone,” Szuwalski said. “You don’t see large individuals of any of the [predatory] species, really, so there is a significant change from the structure of the ecosystem pre-fishing to post-fishing.”

As China’s fishing management system is not implemented by the United States, questions remain as to how the dynamics of this compressed food chain can affect the marine ecosystems.

“‘Are [the ecosystems] more prone to collapse? [What happens] if there are diseases that come through or if there are changes in environmental pressures [or] if there are invasive species?’ We don’t know if they’re more truncated in terms of size and, in some respects, biodiversity. So we’re not really certain how these [species] would be managed in the marine systems because we don’t have any experience doing it,” Szuwalski said.

The main implication, according to Szuwalski, is that given the state of China’s current ecosystem, the Western paradigm of fisheries management used along the West Coast and in Alaska would not work as one might expect if applied to the East China Sea.

“[The Chinese] have already eliminated the predatory fish at the top. They’ve got this rebound of the small-to medium-sized fish that would otherwise be eaten by these predatory fish, and they’re fishing off those. If you were to rebuild the populations of predatory fish and have the larger fish in the water again, they’d be eating about half the catch that they’re currently putting on the plates of the people of China and around the world.”

Using this study to learn about different fisheries’ management strategies can reveal greater insight into the management of other fisheries around the world. Many of them, including those in the United States, are managed by a single-species paradigm. In Eastern Asian countries including the Philippines, Indonesia, China and Thailand, indiscriminate trawl fisheries are more common. The difference results in Eastern Asian countries often using everything they catch in their nets, and the Western hemisphere selectively taking in about 30 percent of their catch contents.

As for what’s next, Szulwalski proposes several directions, all with a focus on seeking a balance between “food security or providing food for the people and maintaining the structure, resilience and competency of the ecosystem that those foods come from.”

Szuwalski expresses interest in China’s production of aquaculture, the farming of fish in enclosures for food. As the world’s largest aquaculture producer, China is responsible for about 67 percent of the world’s total production, and it is the only country to have its aquaculture yield exceed its wild capture output.

“Understanding the interplays between aquaculture and fishery production in both maintaining ecosystem structure and function, and also providing food for the people, is the next direction that we’re thinking of going,” he said.

Another possible emphasis is improving the management of big multi-species fisheries that have already been fished down.

“It’s not something that’s been paid much attention because people generally thought that we should do single-species management,” Szuwalski said. “Look at each one of the species individually, and if it’s not healthy, we should bring it back. But that might have serious implications for society if you’re going to have your catch and the value along with it.”