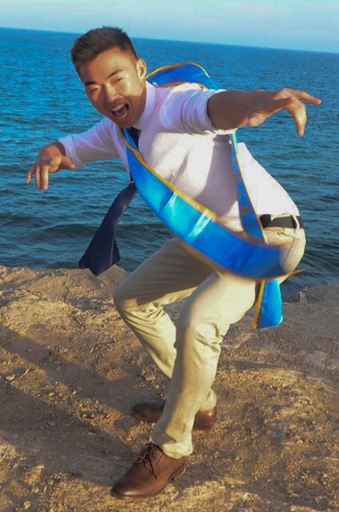 A UC Santa Barbara alumnus died Sunday after falling from an Isla Vista balcony. He was 22 years old.

Kenneth “Kenny” Yun graduated from UCSB in June 2016 with a degree in chemical engineering. Originally from Orange County, he was living in the Bay Area and working as an engineer at Gilead Sciences.

“It was completely new for him, and it was something that he wanted to do,” Chris Ma, a close friend and pledge brother in Zeta Phi Rho (ZPR) fraternity, said. “He was genuinely happy with where he was.”

Fraternity brother Kenneth Millar said Yun was “probably one of the smartest guys” he met at UCSB. According to Millar, Yun excelled in school and always stayed on track with his work.

“He had a drive, and if he had something to do, he didn’t put it off until the last minute,” Millar said. “He did that, still allotting time for the people he cared about.”

Ryan McConnaughey, another close friend and ZPR pledge brother, said he remembers hours-long carpool trips with Yun to their hometowns in Southern California.

“I just really enjoyed how I could carry a conversation with him for hours,” McConnaughey said. “He’s just a very sociable person, an intelligent person to talk to.”

“Every time he walked into a room, the level of the energy in the room just became more vibrant and exciting. He’s just that kind of a person,” he said.

Yun was an “avid skateboarder,” his friends said, and he enjoyed basketball. His favorite teams were the Boston Celtics and the Los Angeles Clippers.

He was a fan of “The Office,” and he listened to artists and music groups like Taking Back Sunday, Rise Against, Kendrick Lamar, A$AP Rocky and Childish Gambino.

Millar said Yun valued “living life up.” In one of their last conversations together, Yun told Millar about a recent trip he took to the Philippines after graduating, which Millar said inspired him to plan his own trip to Antelope Canyon soon after.

“That really gave me inspiration to step outside the confines of just going to work everyday and try to experience what else there is,” Millar said. “I got that motivation from him.”

Ma said he was also able to talk to Yun just a few weeks before Sunday.

“I was so proud of what he was able to do, knowing how hard he’d worked, and he achieved everything that he wanted to do and he had so much more going for him. But it was really unfortunate that it was taken away.”

“The very last thing I was able to tell him was that I was really proud of him, not only as a friend but as a person,” Ma said.