The Daily Nexus
Sports
Vincent-Less Gauchos Need a Victory Before It’s Too Late
February 4, 2017 at 7:01 pm by Jorge Mercado 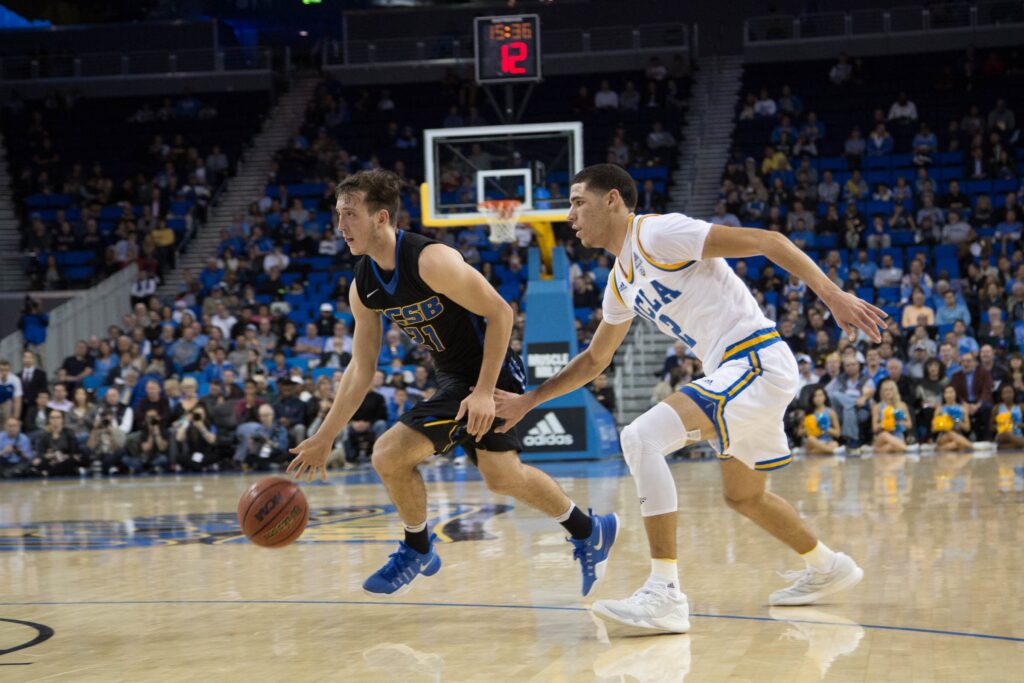 Having slipped past the defense, Max Heidegger runs across the court. Dustin Harris / Daily Nexus

It has been a rough year for the UCSB men’s basketball team, and it got even worse on Friday. For the first time since the 2013-14 season, the Gauchos will be without star junior guard Gabe Vincent in their starting lineup for the rest of the season, and possibly beyond, after he suffered a torn ACL in their home loss to CSUF on Thursday.

Despite the loss, Santa Barbara still has a game on Saturday and will host UC Davis with a substandard 3-17 overall record and a 1-7 Big West record. For the Aggies, this matchup could not come at a better time after suffering a loss to then league-worst Cal Poly on Thursday, which dropped them to second place in the Big West standings, 13-9 overall, and 5-2 in the conference.

In case it was not obvious already, the big storyline for UCSB will be how will they replace the production of Vincent, who has been a consistent force since his freshman year. This season, Vincent was the team’s leading scorer and the Big West’s fifth leading scorer averaging 14.8 points per game. Before this injury, the junior had only missed five games in his two-plus years in a Gaucho uniform.

Replacing the former Big West Freshman of the Year and a 2016 Honorable Mention All-Big West recipient will not be an easy task, but it will be a necessary one if the Gauchos hope to make the Big West tournament for the first time after the conference expanded to more than eight teams in the 2007-08 season.

The aforementioned Cal Poly win not only dropped UC Davis out of first place, but it also put the Gauchos at dead last in the conference. This means that if the Big West tourney were to start today, UCSB would not be in it, thus ending its season despite having defeated the Mustangs for its only conference victory.

Senior guard Eric Childress is a proven solid point guard, good for scoring 8-10 points on a given night as well as dropping four or more dimes and possibly coming up with a bevy of steals. However, that will not be enough if he cannot have one of the young players step up to help him on both sides of the ball.

UCSB’s young athletes range in experience. Sophomore forward Maxwell Kupchak played well in Thursday’s loss, scoring 10 points on 4-6 shooting but will need to be tougher on the glass. Sophomore forward J.D. Slajchert a pure hustle player and very important asset, but he will need to be more consistent with his mid-range jumper in order to help the Gauchos’ 346th-ranked field percentage in the country.

Freshman guards Christian Terrell, Max Heidegger and Clifton Powell Jr. have all shown tremendous promise, but that potential needs to show up now if the Gauchos want to win ball games.

In reality, this season has always been about that. Vincent and Childress were not going to be able to carry this team to the postseason themselves; they need the young players to help them. With the losses of Ami Lakoju, Jalen Canty, Jarriesse Blackmon and now Vincent, that truth become all the more real.

Facing UC Davis will be no easy task, as the Aggies crushed UCSB at Davis 73-47 earlier this year. Not to mention, the Aggies also have one of the best new players in the Big West this year in Chima Moneke, who ranks first in rebounds and third in scoring in the conference with 8.7 RPG and 16.0 PPG.

Even with that, Saturday’s match will tell one thing: how the Gauchos will respond to this type of adversity. Losing anyone to injury is hard, and it only gets harder when that person is as efficient as Vincent, but the season goes on. Santa Barbara has faced some tough setbacks all year, quite possibly more than any other team in this conference, but a berth in the Big West tourney would be a great accomplishment given all it has suffered through.

UCSB faces UC Davis at 7 p.m. on Saturday, Feb. 4, at the Thunderdome.