The Daily Nexus
Volleyball
UCSB Hopes To Bounce Back at Hawaii
February 3, 2017 at 5:00 am by Spencer Ault

Looking to rebound from two straight 3-0 losses to UCLA, the UCSB men’s volleyball team could probably use a change of scenery. What better place for that than Hawaii? 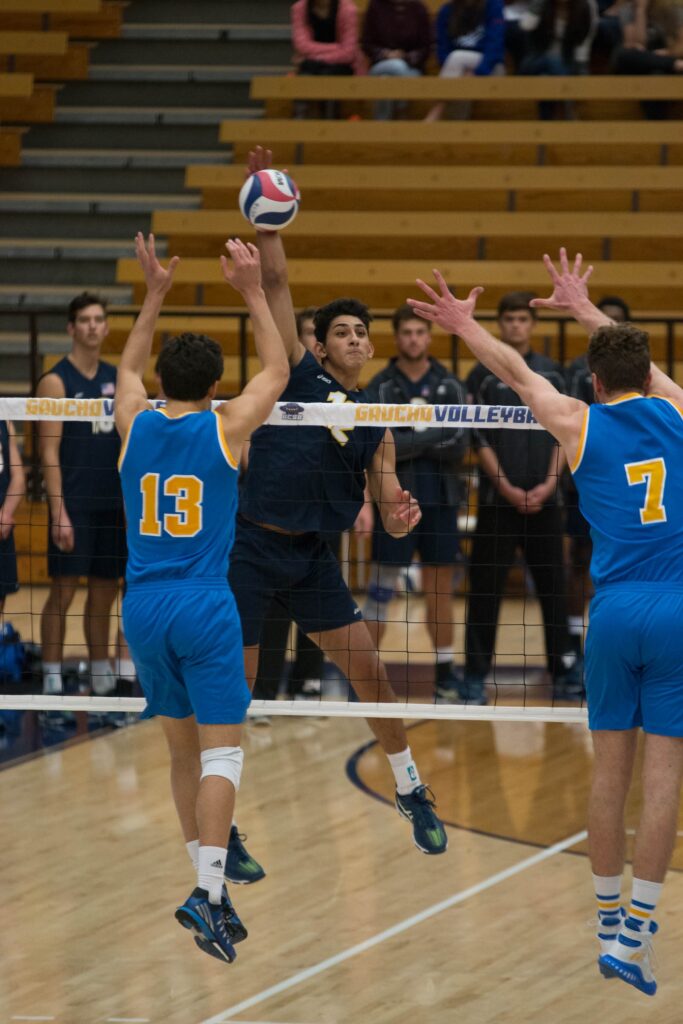 Clocking in at 8-2 on the season, the Rainbow Warriors started their season off with five straight wins before dropping two matches to Long Beach State, currently ranked third in the nation. Hawaii rebounded nicely from that setback by sweeping sixth-ranked UC Irvine 3-0 and by beating the top-ranked NAIA team, Grand View, twice in a row.

Hawaii rebounded nicely from that setback by sweeping sixth-ranked UC Irvine 3-0 and by beating the top-ranked NAIA team, Grand View, twice in a row.

Ranked fifth in the nation, the Rainbow Warriors lean heavily on 6-8 sophomore Stijn van Tilburg, a product of Amsterdam. Tilburg is eighth in the nation in kills per set with 4.07, just one spot behind UCSB’s own Jacob Delson.

Freshman outside hitter Austin Matautia, a Hawaii native, has served as an able complement to Tilburg, although his production has declined in recent matches. In his place, the Rainbow Warriors have relied on more of a balanced offensive attack, with several players recording more than five kills against UC Irvine.

For most of the season, it’s been Jennings Frankisovic facilitating that attack. The senior setter leads the team in assists with 265 and is 16th in the nation with 9.46 assists per set, but it’s been sophomore Joe Worsley who’s handled the bulk of the assists in the past two games. That reshuffle is likely due to Hawaii head coach Charlie Wade’s lineup tinkering against Grand View, so it’s unclear if Worsley will continue as the primary setter even in league play.

That reshuffle is likely due to Hawaii head coach Charlie Wade’s lineup tinkering against Grand View, so it’s unclear if Worsley will continue as the primary setter even in league play.

There’s more to Hawaii’s success this season than just attack prowess, however. The Rainbow Warriors are among the best in the NCAA in both blocks and digs, with a sixth-best 2.53 block per set rate, and a ninth-best 8.89 dig rate. Success in those two areas has allowed Hawaii to hold its opponents to a microscopic .216 hitting percentage.

The Gauchos are going to have to work hard to get past that defense if they want to rebound from last week’s setbacks and really enjoy their trip to beautiful Honolulu. As of late, however, UCSB has struggled with its hitting percentage.

While still ranked seventh in that category, the Gauchos hit at a .235 rate in their two games against UCLA. Against a team with a defense like the Rainbow Warriors’ UCSB is going to have to hit better than that to win.

Key to that effort will be finding another player to help relieve some of Jacob Delson’s offensive burden. Against UCLA, Delson was the only Gaucho to record double-digit kills in either game. In Honolulu, UCSB will need players like Corey Chavers and Keenan Sanders to step up and give the Gaucho attack a more balanced approach.

UCSB takes on Hawaii at the Stan Sheriff Center in Honolulu on Friday night at 9:00 p.m.