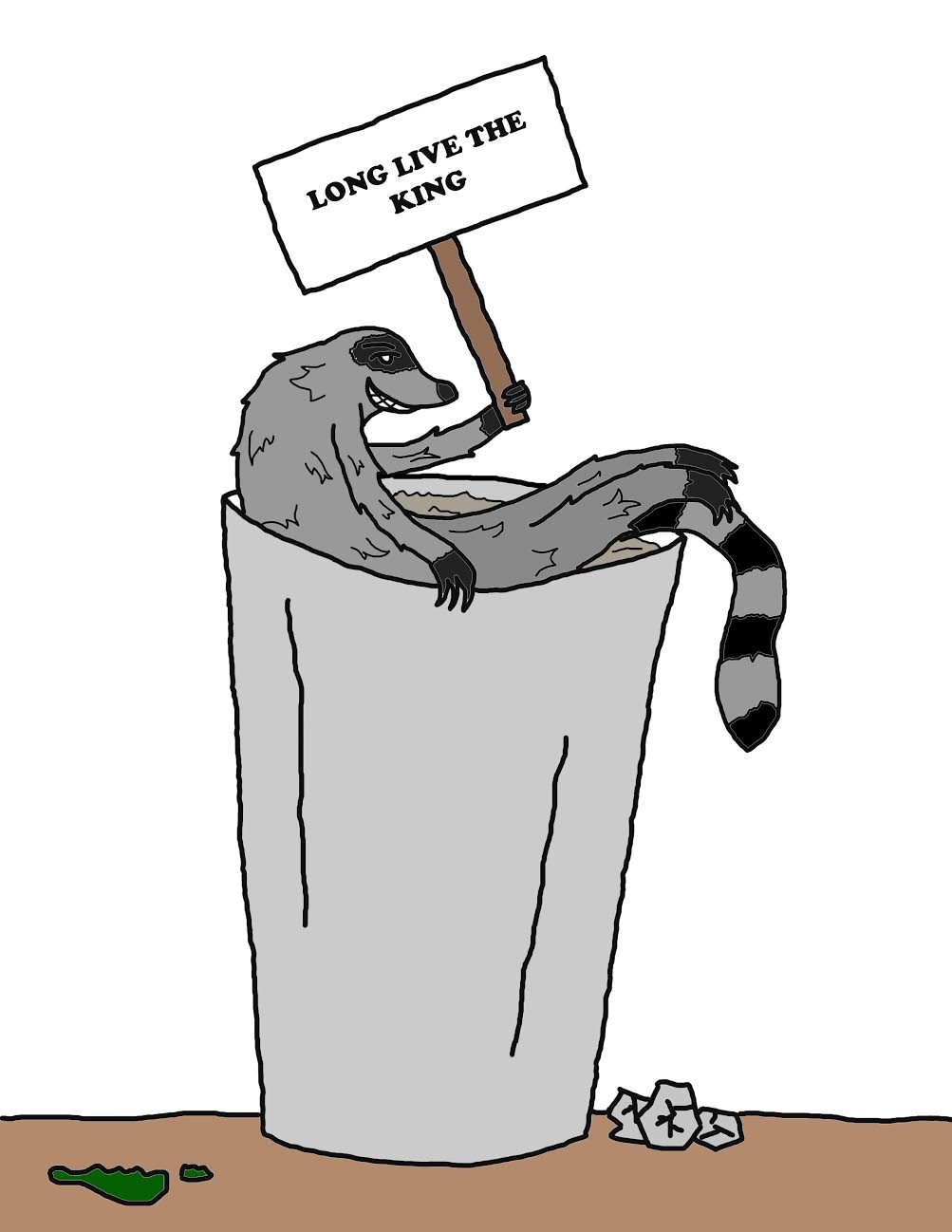 ISLA VISTA — After months of extensive research and hardcore investigative journalism, the truth behind the trash epidemic of Isla Vista has been exposed. There is a raccoon that travels as a renegade throughout I.V. followed by his ravenous band of raccoon disciples. He acts as the Trash Lord, and he grows stronger every single time you litter. His name is Juniper, and he will fuck you up.

Juniper’s origin is unknown, but what is known is that he controls the greater Isla Vista area through his networks of trash. When you litter, you shamelessly contribute to his dominion, essentially putting the metaphorical key to I.V. in his tiny raccoon hand.

While a raccoon may not seem very threatening when standing in the shadow of man, Juniper holds much more power than one might initially assume. Once he grew physically strong enough to gain power over all the other raccoons, he set his sight on his next target: college students. We believe he targets students so he can acquire their trash. The trash makes him stronger and hungrier, thus engaging him in an infinite quest for power.

He began his takeover by organizing his ravenous raccoon disciples (also referred to as the “RavCoons”) to attack individuals, eventually working up to small groups of defenseless students and even entire houses. When he was just starting out, he would even perform some of these attacks personally.

Security cameras have caught Juniper on multiple occasions stealing skateboards directly out from under students and then throwing them into the ocean. He once was reported to take a bite out of a skateboard before disposing of it. As to why he did this, we are still unsure. We believe it was a power play to assert his dominance and establish a reputation before organizing larger attacks.

Once he gained enough momentum, he would send the RavCoons on rampages to bike racks all over campus and through I.V., commanding them to shred all the tires and eat all of the bike seats in sight. This left students immobile and susceptible to more attacks.

If anyone is a known enemy of Juniper, be aware that he will strategically send the RavCoons to pee in your backpack or car. Known enemies are typically anyone who recycles. “He ate my Android,” victim and second-year sociology major Kenneth Walker cried. “He swallowed it whole!” Walker had been petitioning for a better recycling system in I.V., making him Juniper’s top enemy at the time.

To optimize your personal safety, you must be able to identify Trash Lord Juniper. He is much larger in build and fluffier than all the other raccoons, which constantly surround him for protection. He also always wears his signature pair of red Adidas track pants, and he loves it when you call him Big Poppa. If he approaches you, say, “Big Poppa Juniper, take my trash in peace,” and he will spare you.

Juniper was last seen chewing up the aux cord at a party. Stay safe, Isla Vista, and, for the life of you, don’t litter.
Ariana Marmolejo is the Trash Lord of her own personal dominion. Respect to Juniper.