As part of The Carsey-Wolf Center’s 2017 winter events, “Expanded Hitchcock” is a new series that explores the work of director Alfred Hitchcock, whose influence and career spanned over six decades. Each classic film will be examined in a new light with the help of guest speakers, including film scholars, industry experts and “The Birds” actress Tippi Hedren.

The Expanded Hitchcock series began with 1929’s “Blackmail,” a British thriller that was released in both silent and sound versions. As Britain’s first sound film, it was, and still is, heavily praised for its groundbreaking accomplishments. However, the silent version seems greatly preferred in the critic’s eye. Despite Hitchcock’s surprising early control and mastery of sound technique, critics often point to the silent version as the stronger of the two. One such critic happens to be guest Michael Mortilla, an incredibly talented and highly sought after freelance composer, who provided an original, live piano accompaniment for the rarely seen silent version of Hitchcock’s “Blackmail.”

Mortilla’s resume is remarkably impressive. From composing for the 1996 Olympic Games to his multiple commissions from the Library of Congress, the Academy of Motion Picture Arts and Sciences and the National Film Preservation Foundation, it’s easy to see Mortilla’s wide reach and influence in the art of sound design. However, one of his most impressive feats has to be his recent work at the New Objectivity exhibit at the Los Angeles County Museum of Art (LACMA) in January of last year. Mortilla played for more than eight hours straight, providing accompaniment to four lengthy films. While this would be impressive on its own, there is one thing that separates Mortilla from most modern day composers: everything he composes is completely improvised, including Thursday night’s performance of “Blackmail.” That, and the fact that he didn’t leave that eight-hour LACMA performance even once to use the restroom, is perhaps the most remarkable thing about Michael Mortilla.

As much as the night was an exploration of the rarely seen silent version of “Blackmail,” it was equally a celebration of the wonderful creativity of Mortilla. Moderator Charles Wolfe, a professor of the Film & Media Studies Department at UCSB, began the post-screening interview by asking Mortilla how he prepared and executed his performance with such precision without the aid of a score or sheet music. After jokingly refusing to answer Wolfe’s question, Mortilla began to explain his technique.

He begins his rehearsals by improvising through an entire screening of whatever film he is to perform to. This can include anywhere from seven dry runs to none at all. This time, however, he “practiced his ass off.” He typically continues to improvise until “something sticks,” at which point he begins to solidify a general outline of his upcoming performance. For “Blackmail,” he knew he was ready when he was able to play his entire piece without the help of the film, relying entirely on his memory.

While he doesn’t have a score, Mortilla does have a general feeling as to what the film should sound like. “The screen is my palette,” said Mortilla, beginning to explain the ways in which he concentrates his improvisation on a diegetic grounding. His overall goal is to “create an actual atmosphere that the people actually live in,” and so his improvisation is mostly inspired by the story and themes of the films themselves. This focus on a narrative theme and feeling helps keep Mortilla on track and ties his improvisation together within the confines of the film. For “Blackmail,” the result is a tense and percussive theme that reinforces the film’s stressful, noir tone. In fact, it was Hitchcock’s often complicated and layered tone that influenced much of Mortilla’s own score for “Blackmail.” 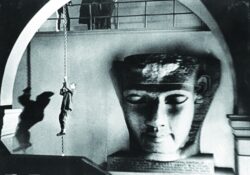 With a penchant for dark humor and irony, Hitchcock often complicates the lines between a suspenseful thriller and a tongue-in-cheek comedy. Mortilla had to address this dichotomy, deciding his score had to “keep an emotional content void.” With so many layers of emotion and underscores of ironic impending tragedy behind nearly every scene, the score could not be entirely happy nor entirely sad. In the end, the score had to arrive at a neutral energy level, with the occasional spike and suspenseful build up.

Mortilla had to consider the same balancing technique when it came to Hitchcock’s peculiar pacing of the film. “The pacing changes in a snap second,” answered Mortilla, when asked how his score was influenced by Hitchcock’s use of motion. With both the camera and actor moving and stopping so frequently in “Blackmail,” Mortilla had to be ready to stop at a moment’s notice. However, this is one of the many things Mortilla loves about Hitchcock: the way “he suspends time, (and) forces us to go slow,” as if the director himself was telling Mortilla to stop. And that is exactly what Mortilla does.

When he goes to see other live accompanists, he ends up wanting “to run out of the theatre screaming.” His frustration stems from seeing the other silent film accompanists playing for themselves and showcasing their own talent, instead of sitting down and playing what would be best for the film. According to Mortilla, there is only a “pocket” of four or five composers who play to the film in the same manner as he does. Mortilla believes what many of the musicians lack is a proper background in movement, as most of them aren’t rooted in genres associated with dance. Mortilla, however, is no stranger to movement and dance. In addition to his previous work as the former resident composer for UCSB’s Theater and Dance department, Mortilla also worked very closely with Martha Graham — the mother of modern dance — composing and playing for her and her dance troupe across the nation for a variety of events.

For Mortilla, improvisation is all dance, and it’s no doubt one of the reasons he finds a love for Hitchcock. “Blackmail” is the perfect film for which Michael Mortilla to compose to. Its challenges in balance, from tone to pace, keep Mortilla’s ever changing melody on its toes. Each key is pressed for the sake of the film. In his own words, it’s as if a “ghost is in my fingers, making rhythms for me.”

For the next installement of the Expanded Hitchcock series, or for other Carsey-Wolf Center screenings, go online to carseywolf.ucsb.edu/pollock.