The line for will call led well past the door of the Granada as people of all ages streamed into the packed venue last Friday night. From the elderly to college students to a young girl no older than nine, those of all ages gathered together to experience Story/Time performed by the award-winning Bill T. Jones/Arnie Zane Company. The set itself was relatively simple, consisting of a small couch, a chair and a desk set laden with green apples and a singular glass of water. Initially, a large monitor displaying a timer was also present. The simplicity of the set contrasted with the luxury of the Granada’s interior.

A plainly dressed Jones greeted the audience before the performance, inviting them to play a game. After an assistant set a timer, he urged those in attendance to raise their hands after they thought a minute had passed. The exercise was intended to familiarize the audience with the timing of the various “storytimes” of which his performance would consist. The concept of the performance was borrowed from John Cage’s work Indeterminacy, which was performed in 1958 and followed a similar format in which one man read short stories aloud on a stage. Jones mentioned John Cage when describing the inspiration for the show, saying he was not inspired by him, but rather was “provoked” by Cage’s style. “Intermittently throughout the day I have been feeling like crying or breaking something. I wonder if the story is better. If I don’t explain why,” he read at the beginning of the show.

Jones’ strong voice cut through the theater as he read his stories, which varied greatly across subjects, themes, time periods and locations. One of the more powerful and personal “storytimes” dealt with Jones’s mother’s reaction to his father’s death. Jones recalled his distraught mother reverting to an almost child-like state, losing control and giving herself over completely to grief, rolling around on the floor sobbing. As he told the emotionally intense story, smoke descended down from the rafters and the dancers rolled across the stage. At the conclusion of this particular anecdote, Jones looked up from his paper and broke the fourth wall, staring directly at the audience. 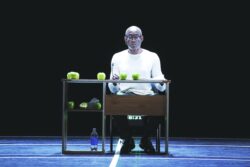 Another storytime dealt with Jones’ recollection of holding a hummingbird and marveling at the fragility of life and dependence. Dancers performed impressive acrobatics throughout the performance, showcasing their extreme flexibility and incredible strength by jumping and moving their limbs in complex contortions. In one instance, a dancer stood on the shoulders of another before falling into the arms of the rest of the company while chimes sounded all around them. While the dancers twisted their bodies around him, Jones sat at his onstage desk, placed in the center, and continued to read his stories. The dancers’ choreography was varied, at times dependent on one another or synchronized and in other moments completely wild and singular. Their expertise was emphasized by their appearance of weightlessness and fluidity, yet they simultaneously  had obvious and complete control over their movements.

Despite the dramatic overtones of many of the stories, humor was expertly integrated into the performance. One story in particular recalled a time in which Jones followed advice from a spiritual guru. He spoke of how one weekend, although his teacher advocated strict celibacy and vegetarianism, Jones unexpectedly ran into him at a street market, on an outing with his wife and eating a hotdog. In stark contrast to this light story, Jones read about the Rwandan Genocide. Grisly noises played over this story, making Jones’s words indecipherable. Dancers continued dancing until the stage lighting changed, focusing not just on Jones, but on the entire stage. No one moved and Jones looked up, forcing silence among the audience with his powerful gaze and drawing the moment out so it was almost uncomfortably long.

The storytelling itself was arranged similarly. Jones mentioned he had around 180 stories to select from, but only read about 50, randomly chosen, at the Granada. Ultimately, lighting, stories and dance moves were all subject to change. Wong and Jones did acknowledge the existence of what they deemed “crafted moments,” or certain stories and chorographical moments which could not be separated. Wong expressed pride and excitement regarding their work and how it was arranged, explaining that they “keep the pieces fresh for ourselves.”

Jones responded to a question about the importance of apples in his piece, referring specifically to the green apples placed on the desk at which he read. He recollected a story about an older man stuck in a menial job who ate crisp green apples, explaining “it is all about association” and “they’re just objects, but they’re not.” This particular story was not told as part the night’s selection, having not been selected by the generator.  It serves a perfect of not only the artistic spontaneity of the entire performance, but also the unifying thread of hidden meaning.