The Daily Nexus
Volleyball
Gauchos Sweep Through Cal Baptist for Third Straight Victory
January 23, 2017 at 5:04 am by Spencer Ault

The Gauchos won that set and the match by a 3-0 score, but the drop-off is just the latest example of a worrying midgame “hangover” trend. Against teams like No. 2-ranked UCLA, UCSB’s next opponent, the Gauchos won’t be able to shake that hangover off so easily. 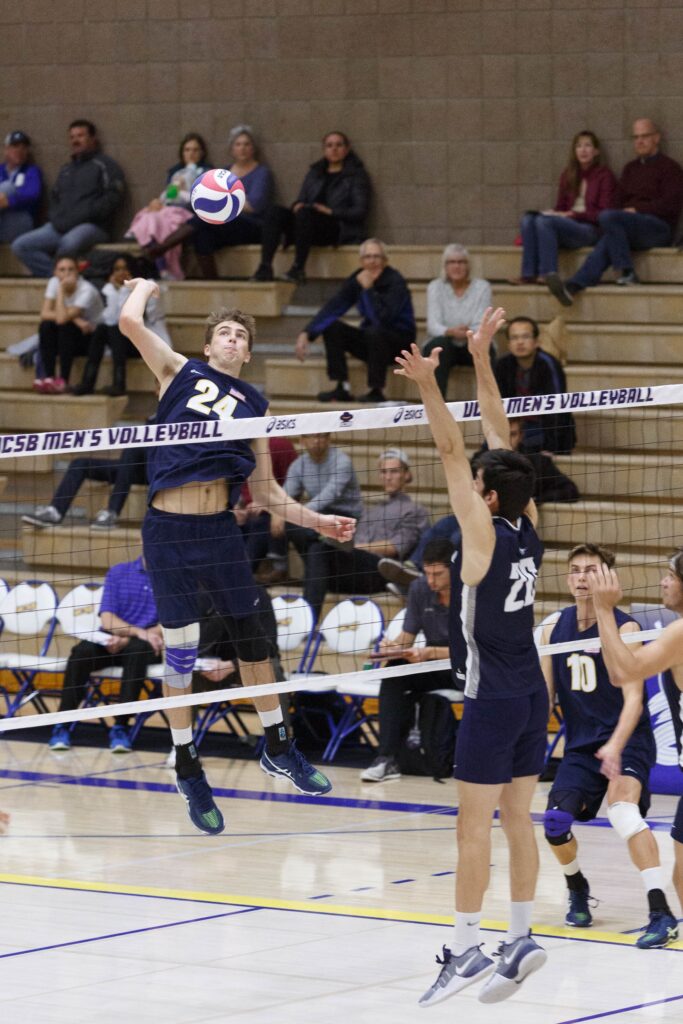 “We tend to let down after we have a really good [set],” Head Coach Rick McLaughlin said after the game. “You saw that against [USC] on Wednesday and we talked about that, but we did it again … Any team that lets down like that is going to come up against it later in the year.”

Against Cal Baptist, the Gauchos, now 6-1 overall and 3-1 in MPSF play, followed that pattern almost exactly. Down 4-2 early in the first set, UCSB rallied and ran away from the Lancers, closing the set out on a 13-3 run and racking up 13 kills against zero errors.

In the second set, however, things were not nearly as clean or easy for the Gauchos. The Lancers, 2-5 overall and 1-3 in conference, opened up with a 4-0 run, forcing McLaughlin to call timeout right out of the gate.

Three straight kills from star outside hitter Jacob Delson closed the gap, but it wasn’t until another Delson kill 27 points deep into the set that UCSB finally took a lead. That lead held for the rest of the set, but the Gauchos were never quite able to shake Cal Baptist off.

Three straight kills from star outside hitter Jacob Delson closed the gap, but it wasn’t until another Delson kill 27 points deep into the set that UCSB finally took a lead. That lead held for the rest of the set, but the Gauchos were never quite able to shake Cal Baptist off.

“Winning a [set] and then coming out there lax for the second [set], that’s what we’ve got to stop doing,” McLaughlin said. “It’s going to bite us at some point.”

The Lancers came out hot again in the third set, but the Gauchos managed to assert their authority much quicker this time around. A general pattern of two points for UCSB, one point for Cal Baptist pushed the Gauchos out into a healthy 15-10 lead, which turned into a final tally of 25-16.

Delson was, unsurprisingly, UCSB’s leading hitter Friday night with 15 kills, but it was his passing that really shone. The redshirt senior, along with brothers Parker (red shirt senior libero) and Hayden Boehle (junior outside hitter), drew praise from McLaughlin for their success in keeping the offense flowing.

“I thought the three passers played great,” McLaughlin said. “[Delson] has playing great every night out, and he’s really leading us.”

The strong work from the passing trio held the Lancers to only one ace on the night, while UCSB racked up five of their own. Redshirt sophomore middle blocker Henri Cherry led the Gauchos with two, while freshman middle blocker Keenan Sanders, Hayden Boehle and senior setter Grady Zant each had one of their own.

Up next for UCSB is second-ranked UCLA in Westwood on Wednesday night at 7 p.m., the Gauchos’ first road game of this young season.