After posting a career-high 22 points in the team’s previous game against UC Riverside, in which she made a career best four three-pointers, Porter continued her dominance notching her first career double-double with 17 points and 13 rebounds in the UCSB women’s basketball team’s 65-60 victory. 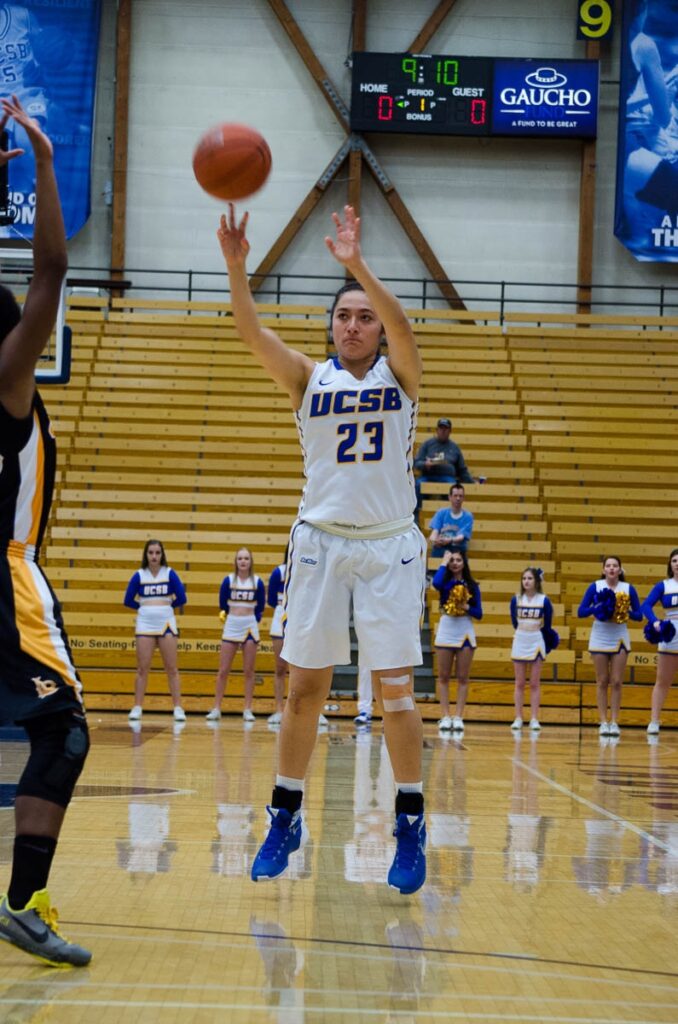 UCSB improved to 8-9 and is now in a three-way tie for second place in the Big West standings with both of the teams it recently defeated in Long Beach State and UC Riverside at 3-1. The 49ers had both their four-game winning streak and unbeaten conference start ended, making them 12-7 overall.

It was the first time this season that five Gauchos finished with double-figures in points.

Porter’s rebound total is a team-high thus far this season. It was also the first time this season that two Gauchos tallied double-doubles. Redshirt junior forward Drew Edelman concluded Thursday’s game with 10 points and 10 rebounds for her fourth career double-double.

Much credit is due to the UCSB defense as its pressure led to a 5-for-21 three-point shooting performance by Long Beach State.

Following a quick two-for-two start to the game on layups by Edelman, UCSB went cold from the field, missing three consecutive three-point attempts and trailed 9-5.

Helping Long Beach State embark on its quick start was the three-point shooting of junior guard Cece Wilson, who hit back-to-back long range shots. Wilson had 10 points on 4-for-7 shooting.

Knocking down UCSB’s first long range basket at the 5:40 mark of the first quarter was Porter, which sparked the Gauchos 13-5 run to close out the first quarter as they shot 50 percent from both the field and behind the perimeter on 7-for-14 and 3-6 three-point shooting.

Porter set the tone for the Gauchos by going on an 8-1 run of her own during the stretch of points. She ended the period three-for-three shooting and two-for-two from beyond the arc as UCSB ended the period with an 18-14 lead.

Prior to that, UCSB took a 16-14 lead after a made three-pointer by Miller. It would maintain the lead for the remainder of the game.

The Gauchos’ largest first half lead was of seven points with a 25-18 lead which resulted from a three-point make from sophomore guard Coco Miller.

However, the 49ers did not allow the deficit to expand as they went on a 6-0 run to cut UCSB’s lead to 25-24. Leading Long Beach’s run was senior guard/forward Jewelyn Sawyer, scoring each point.

Sawyer scored 10 of her game-high 20 points in the second quarter, making five-of-six shots in the period. She ended the game 9-for-10 from the field and grabbed seven rebounds.

Still, UCSB managed to enter the half with a 32-31 lead after a made jumpshot by Miller.

Santa Barbara ended the game with 16 turnovers as it occasionally had its difficulties with the 49ers’ full court press throughout the game but was able to overcome them.

UCSB remained consistent from behind the perimeter as two of its first three field goals were three-pointers by senior point guard Onome Jemerigbe and Porter to open the second half.

Santa Barbara’s success from three-point range in the third quarter, going 3-for-6 from deep and 6-for-14 overall, helped it to sustain a lead of 47-41 entering the fourth quarter.

The final period was the Beach’s best period as they scored a total of 19 points. Despite scoring one field goal in the third period, Sawyer made it a two-point deficit at 49-47 with a made layup.

One of the biggest shots of the game was a three-point make by Jemerigbe which was UCSB’s first basket of the quarter, but was a crucial basket that provided a cushion as it extended the Gauchos’ lead to 52-47.

Both teams would go on to trade scores as LBSU would get its last chance to either trim its deficit or tie with a three, but a missed three-point attempt senior forward Madison Montgomery.

An 11-for-12 performance at the free-throw line in the fourth quarter helped seal the deal as Jemerigbe and Porter both were clutch, going 4-for-4 to secure the win.

UCSB will play the final game of its home stand vs. Hawaii this Saturday, Jan. 21 at 4 p.m. at the Thunderdome.