The UCSB men’s tennis regular season is underway as they look ahead to this weekend’s matchup away from home against tied-for-No. 7 UCLA.

The Gauchos enter this competition undefeated at 2-0 after big sweeping victories over San Diego State and Hawaii. Having not given up a single set in their two wins this season, the Gauchos also boast an impressive record of 24 out of 25 single sets won on the year. 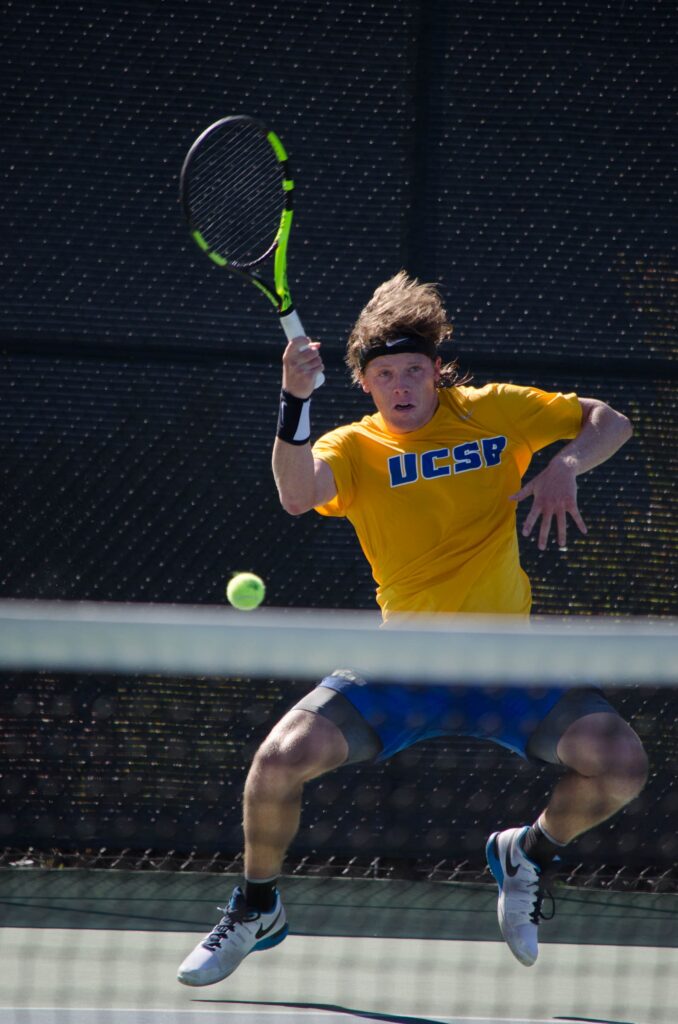 Morgan Mays jumps up to send the ball back over the net. Christina DeMarzo / Daily Nexus

UCLA hosts this early season match-up 1-0 overall to start the season after defeating Grand Canyon University 7-0 in its home opener yesterday. The Bruins are coming off a successful 2015-16 season in which they went 24-2, reaching a national ranking of No. 2 in the country and making it to the NCAA quarterfinals before having their season ended by No. 10 Oklahoma.

There’s plenty to highlight when considering the UCSB men’s tennis season thus far beyond the sweeping of its first two opponents.

As of last week, the combined talent of junior Simon Freund and senior Morgan Mays has launched them into 19th overall in the national rankings for the men’s doubles. When considering Southwest ranking, they are first overall.

The duo can attribute their continuous success through their multitude of important victories. Most notably, the pair attended and won first place at the ITA Southwest Regional. They earned the Doubles Title after their final match against UCLA, where they bested senior Joseph Di Giulio and junior Austin Rapp.

In addition to regional champion, Freund was ranked fifth overall for his age group throughout his junior year. This Swedish-born international competed in the junior Australian Open and had a 42-17 singles record.

Mays, a Malibu, Calif. native, was named this opening week’s Big West Player of the Week after going undefeated in his opening matches of 2017. He was 157th overall in the world on the ITF Junior rankings. He’s also broken Top 10 nationally for his age division during his junior career.

As for the No. 7 Bruins, Rapp and Di Giulio shined once more as they faced off against GCU’s freshman Francois Musitelli and sophomore Mathieu Rajaonah. Sweeps of 2-0 were observed for all matches except for that of freshman Evan Zhu and junior Logan Staggs. Zhu faced off against senior Adrian Legarreta and had to go to an extra set after a close first two.

Despite the convincing victory, UCLA is still going to have a tough time early on in the season, having to replace now-graduated Mackenzie McDonald and Martin Redlicki.

In the end, the Bruins will most likely expect a win over the unranked Gauchos; however, due to UCSB’s early hot streak, Saturday’s game should be a hard-fought, great-to-watch match.

The Gauchos will face off against the Bruins this Saturday, Jan. 21 starting at 1:00 p.m. Competition will take place away at the Sunset Canyon Tennis Courts.