The Daily Nexus
On the Menu
Culture and Cuisine: A Culinary Conversation
January 19, 2017 at 12:27 am by Natasha Tandler 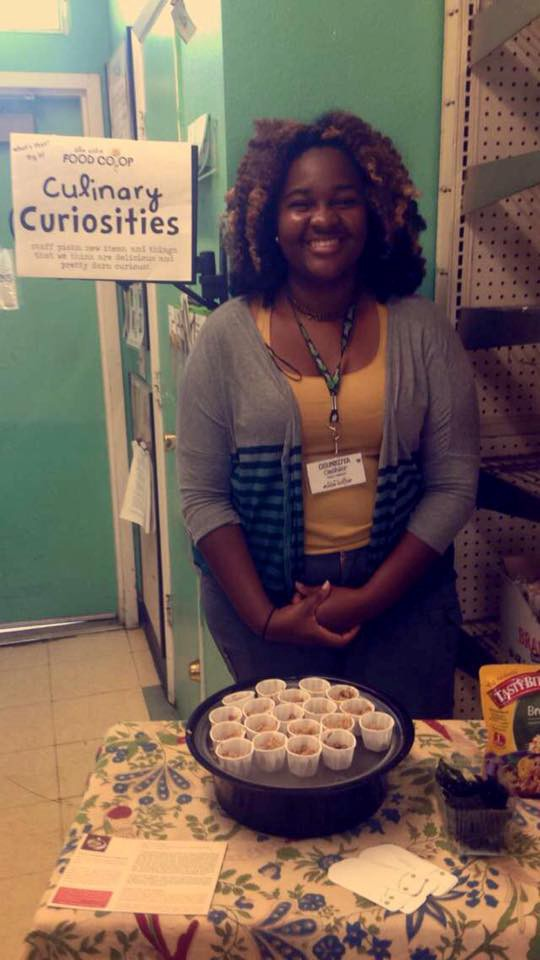 My friendship with Osunkoya Chavon began because of food. I would silently drool over all of the delicious lunches that she would bring to our Spanish class which inconveniently took place during lunchtime. After several days of consistently admiring her food from afar, the inner foodie in me asked her where she was purchasing such healthy, colorful and fresh lunches.

With a large smile on her face, Chavon proudly told me that she makes her meals at home as much as possible. She then showed me her Facebook food blog, which she calls “Foodtivities.” It was filled with gourmet foods that none of my other college friends would even dare attempt to make. The blog included mouth-watering photos of samosas, chicken curries, eggplant pizzas, stuffed acorn squash and other dishes that she had made. 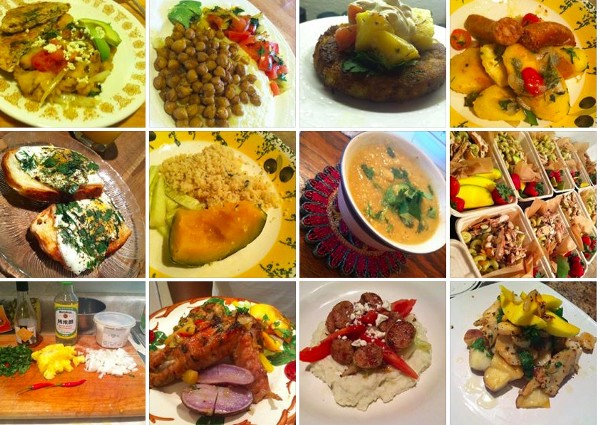 I immediately befriended her on Facebook and started following her on Snapchat, where she posts daily videos and pictures of her food creations. From that point forward, our friendship blossomed.

I recently sat down with Chavon, a fourth-year global studies major at UCSB, one stormy November afternoon in her kitchen in Isla Vista. We chatted about her unique relationship with food while I watched her cook (and simultaneously danced to an eclectic mix of music ranging from Ella Fitzgerald to OutKast). 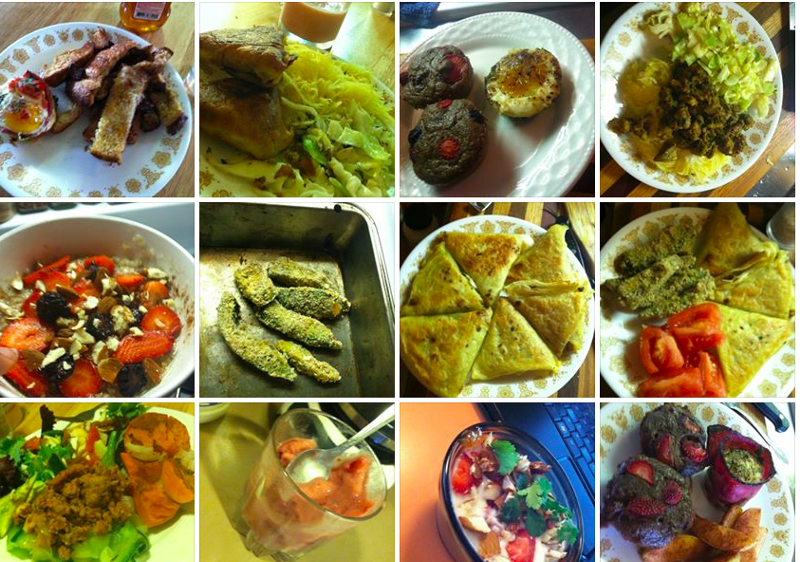 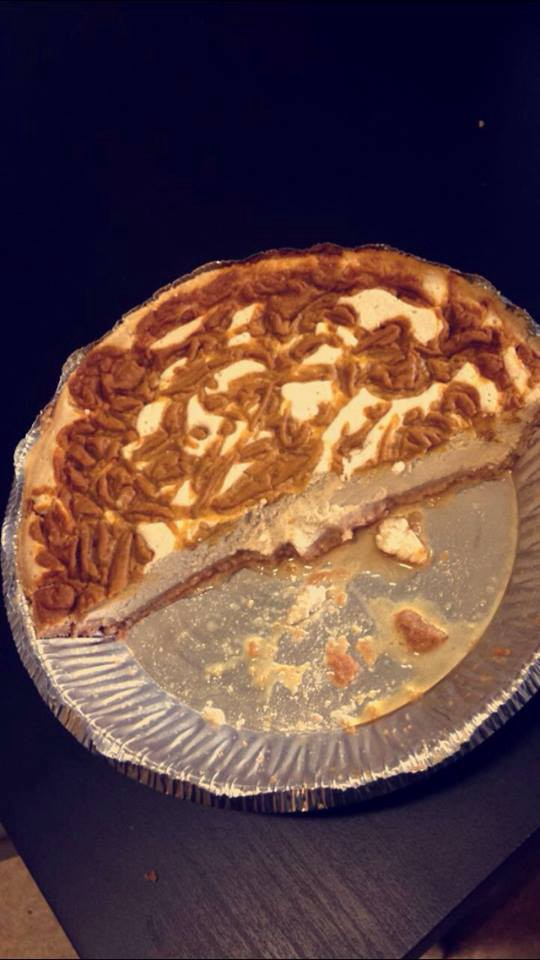 Chavon was born and raised in Atlanta, Georgia. She is black and said that she was raised in a multicultural environment, especially when it came to food.
“My mom always made sure that we lived close to this one particular farmers market called Your Dekalb County Farmers Market in Atlanta,” she told me. It is an international food market that she claims is “bigger than the size of two Walmarts combined.” Living close to this market with such diverse foods was important to Chavon’s mom so that the family could visit the market frequently.

Chavon admitted that she ate fast food during her childhood, too. Since her mom produced the National Black Arts Festival when Chavon was growing up, she said that they “were always running around downtown.” They would either get fast food or Jamaican food if they were in a hurry.

There were two major influential figures in Chavon’s food journey growing up: her aunt and her stepdad. Her aunt from the Dominican Republic, named Yomi, lived with her family for three years. Yomi went to culinary school and introduced Chavon to food from her home country such as arroz con pollo (sticky rice with chicken) and paella dishes.

“We would sit and watch her cook and be so amazed,” Chavon recalled.

After her aunt left, Chavon’s mom met her stepfather, Curtis, when Chavon was 16. He is a professional chef who has worked in the homes of stars like Will Smith and Russell Simmons. Curtis, originally from Trinidad and Tobago, cooked Chavon’s family “fancy food and basic Caribbean staples.” Chavon’s stepfather and aunt were largely responsible for introducing her to many different flavors and spices that she uses to this day in her own meals.

It is important to mention that food was also central to Chavon’s religious identity when she was younger. She grew up in a West African spirituality originating out of Yoruba culture called Ifa. This called for a lot of communal gathering attended by practitioners from lots of different cultures, ultimately shaping her relationship with food, culture and identity as something in “constant diasporic motion.” Within their spiritual traditions, ceremonial animal sacrifice is important.

Chavon said that her religious community would sacrifice “chickens, goats, hens and/or turtles.” She explained that during the animal sacrifice, “We are praying to our deities and to the animals, which is no different than people eating beef or chicken. It just happens to be in front of our ancestral shrine room within a religious ceremony.” 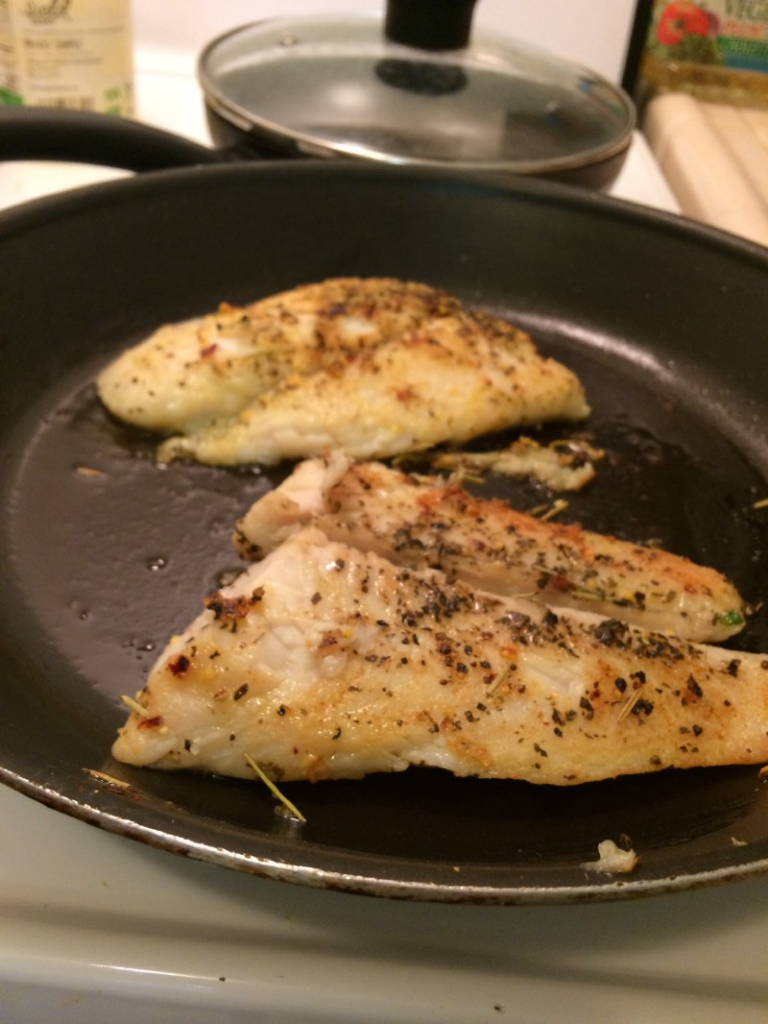 Reflecting back, Chavon said, “I didn’t really cook that much growing up. It wasn’t until I moved out to California to go to school that I was forced to learn how to cook for myself.” Although she knew basic food preparation, it wasn’t until college that she really started cooking for herself. So Chavon, like many other millennials, consulted our modern-day version of Julia Child’s Mastering the Art of French Cooking: Pinterest.

Pinterest gave her a lot of inspiration and ideas for dishes to cook. After experimenting with these recipes, Chavon began to see that her efforts were paying off. The food that she was making tasted terrific.

She started posting photos of her meals to Facebook and also reached out to friends and family on Facebook for more recipes and suggestions. Osunkoya said making food in California became “a way for me to connect with all the cultures and family I was surrounded by back home.”

Other sources of inspiration for her were chefs from Oakland, the Bay Area and Atlanta. “I would go to restaurants and be in awe at how amazing the food was. I just had to go in the back and talk to the chefs,” Chavon explained with a laugh.

In the middle of her sophomore year of college, she got a job working at the Isla Vista Food Cooperative, where she still works at to this day. This job has had a tremendous impact upon Chavon’s food journey. She commented, “Working at the Co-op has shown me that I don’t have to eat as much meat, and it has influenced me to put importance on where my food comes from.” 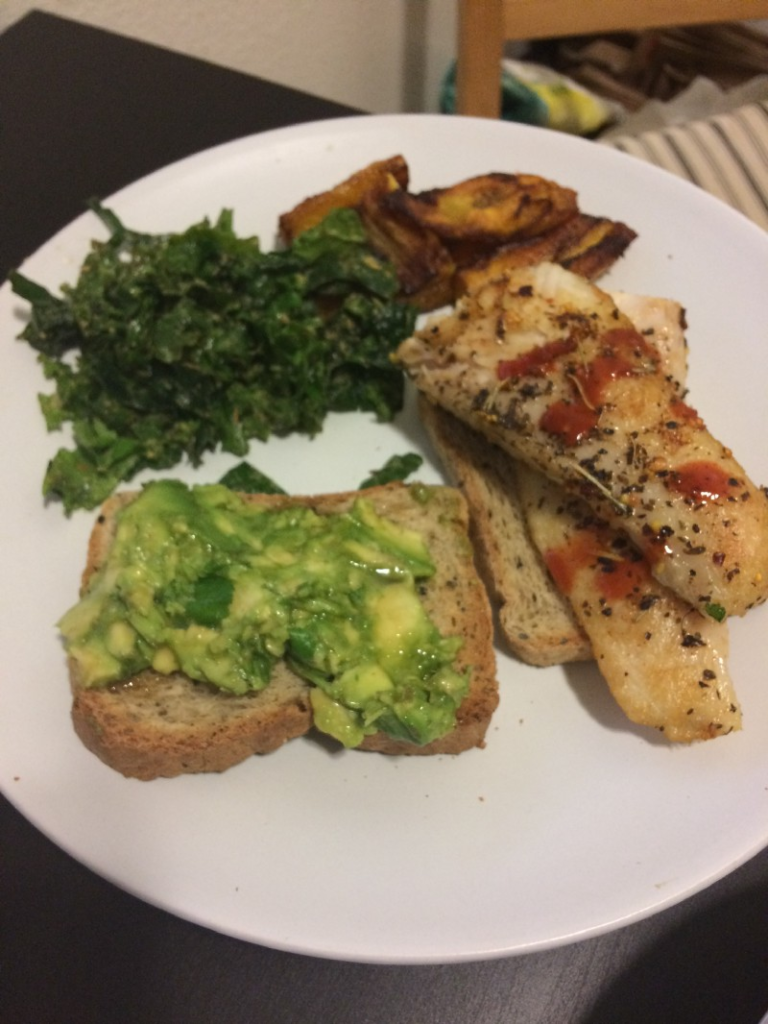 On a daily basis, Chavon eats a lot of vegan food but by no means identifies as a vegan.

“Veganism just is not a part of my personal food journey,” Chavon stated. Overall, Chavon tries to be “environmentally and socially conscious” when it comes to the food that she prepares and eats.

With that said, she confessed, “Sometimes I just want lamb — which is my weakness — or fried fish because it reminds me of family reunions or grandma’s house.” She also added, “I could be taken from this life at any moment and, while I do want to be significantly cutting my impact on the environment, my community and the animals, I do want to enjoy certain things in life, too.”

However, when it comes to her own kitchen, she will not purchase food that has dairy and tries not to include red meat for a good portion of her meals during her week. In this way, Chavon’s identity with food is very fluid and is not restricted to any labels.

Her food identity is also filled with a tremendous amount of agency. Most of her groceries come from the Isla Vista Food Cooperative, which allows her to know exactly where the food that she purchases comes from.

Personally buying and preparing the food that she consumes instead of dining out frequently also strengthens Chavon’s food identity, as it is a way for her to connect to her home in Atlanta.

“I feel like my journey with food has been shaped by being away from my community so much. I use cooking and music to connect with the cultures that I once had contact with, whether that is through those spices or dance moves,” Chavon said.

Chavon also said that making food is a form of artistic expression for her.

“Whenever I have a crazy day and I am so tired, if I am in the kitchen, I feel like I am floating,” she told me.

Listening to music is key to Chavon’s creative process when she is cooking. She also really cares about the presentation of her food. In these ways, cooking has become a method of empowerment for Chavon as a chef and as an artist. 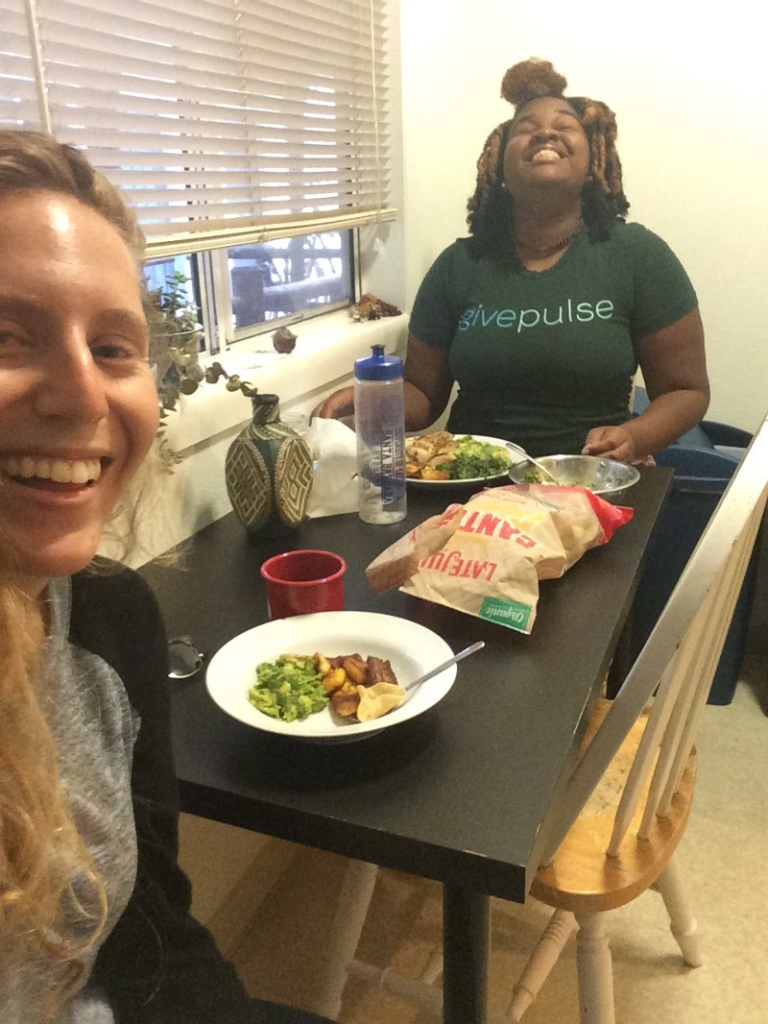 One of Chavon’s main goals after she graduates from UCSB is to become a graduate student at Berkeley’s Goldman School of Public Policy. She hopes to work closely with the Berkeley Food Institute as well as “key game players” at the UC Global Food Initiative. Ultimately, she wants to become a food advocate and “give back to the community.” After she achieves these goals, she said that it is possible that she will become a professional chef, but it is not her main goal in life.

After about 40 minutes of preparing the food, Chavon’s meal for the two of us was ready. She made a tilapia sandwich for herself (since I am a vegetarian) as well as fried plantains and guacamole for the both of us. Everything was delicious and beautifully presented. I am confident that Chavon’s incredible passion for food, as well as her kindness for other human beings, will drive to her achieve any and all of the goals that she sets for herself in the future.