As I walked up the steps of the Lobero Theatre, I took a look at the boots and heels leveled above me, perched neatly on concrete. I saw small, disposable wine cups in almost every hand that was waiting patiently for the show to start. The intimate venue was warm and ready for the Saturday night show, simply christened “An Evening with Dawes.”

Once the house lights went dim, Dawes walked onto the stage with an energy that was stadium-ready, silhouetted by a variety of multi-chromatic backdrops. Once the band was visible, it was clear that they were greeting the stage with comfort. Lead singer Taylor Goldsmith went right into “One of Us,” from their fifth album, We’re All Gonna Die. A week before the show, I had the chance to talk with drummer Griffin Goldsmith, younger brother of Taylor. Of the sharp album title, he said simply, “that general concept is applicable to anybody, anywhere.” And, as I watched the band play, I knew that was their intention: to be music for anybody, anywhere. Their brand of guitar music is quite refreshing in its sincere, unpretentious nature.

A large theme in the music of Dawes, especially on their most recent effort, is acceptance. When asked of the things that he has had to accept recently, Griffin offered, “it’s nothing like ‘fuck Trump,’ it’s more just about experiences with aging, or things like that.” This, combined with the virtual absence of electronic elements in most of their catalogue, gives them an appeal to a more mature audience. Informally described as “dad rock,” some other familiar, and successful, acts that have this sound are Wilco, Ryan Adams and The National. The concertgoers that I noticed flooding the lobby of the venue and standing in lines to buy merchandise were not young and were mostly male.

Any genre prefaced by the word “dad” is bound to ruffle feathers, but the label doesn’t offend Dawes. “That’s not the most encouraging genre,” Griffin laughed. “But, I mean, that kind of stuff doesn’t offend me. I feel like all it does is allow people to categorize us, in a sense.” He then considered the genres that are generally accepted, and commonly used to describe Dawes’ sound. “We often get ‘Americana’ or ‘Laurel Canyon sound.’ I do the same thing with music I like,” he considered. “It’s fine; to put it in a box means that you like it.”

Genres are, in fact, boxes; they’re compartmentalized for conveniently choosing what we want to consume in a culture constantly flooded with new music. However, some music is best created by challenging these very categories, and Dawes knows that is where the opportunity for growth lay while writing We’re All Gonna Die. “I think the songs made it very clear to us that this wasn’t going to be a folk record. We felt like these songs could benefit from a different approach,” Griffin explained. One of the songs, “When the Tequila Runs Out,” explores the dynamic between the familiarity of the band’s typically delicate approach to music and the heavier sound that runs throughout their new songs. The crowd raised their plastic glasses to the chorus and danced in the space between their seats and the carpeted aisles. 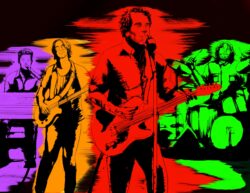 Throughout both hour-long portions of the show, Dawes scattered quiet moments from earlier in their catalogue. “Now That It’s Too Late, Maria” was a particularly charming moment in the set list, with the harmonies of the Goldsmith brothers highlighting the folk ballad’s lovelorn lyrics. The brothers’ chemistry in conjunction with their other bandmates is smooth. The pounding, Fleetwood Mac-like rhythms of bassist Wylie Gelber keep the band grounded, while flourishes added by keyboardist Lee Pardini give the songs a much appreciated lightness.

Dawes’ world-wise, well-traveled lyrics are built around metaphors that fill the music with warmth. A track that is a personal favorite of mine, “Time Spent in Los Angeles,” is a folk-rock gem bordering on country, about a girl who has “a special kind of sadness” because of the city that she’s spent her years in. In fact, to record their newest album, the quartet returned to Los Angeles, their hometown. The band has spent a considerable amount of time in other locales, recording albums in North Carolina and Tennessee. Their homecoming to the West Coast metropolis is perhaps what allowed for a cooler sounding record. The existential chill of “We’re All Gonna Die” filled the room with what felt like a rush of air, in comparison to the acoustic tenderness that characterizes songs like “Time Spent.”

After a show that ran well over two hours, the band left the stage, only to return again for an encore. When they walked back onto the stage, they humbly received the applause that swelled below them. Earlier in the show, frontman Taylor Goldsmith mentioned that the band played the Lobero in 2013, filling only half of the room. Upon their return this year, they were playing a sold out show. Recording a total of five full-lengths in seven years and touring behind powerhouses such as Mumford and Sons, and legends such as Bob Dylan, Dawes’ work ethic is impeccable. We’re All Gonna Die, and the solo, multi-city tour behind it, did not push the band in a new direction, but, in fact, many different directions. Brash guitar jams, cool synth-rock and, of course, warm acoustic-folk can be found in bits and pieces throughout the album. The categories that we put artists in can, of course, stifle them. But when music transcends categories despite, or in spite, of genres, is when the best art is made.

Thank you for a fresh conversation about the most excellent Dawes and for the first review of the tour.