UCSB union members gathered at Henley Gate for the second UC-wide strike in three months on Tuesday morning, organizing alongside all 10 University of California campuses to protest insufficient wages. 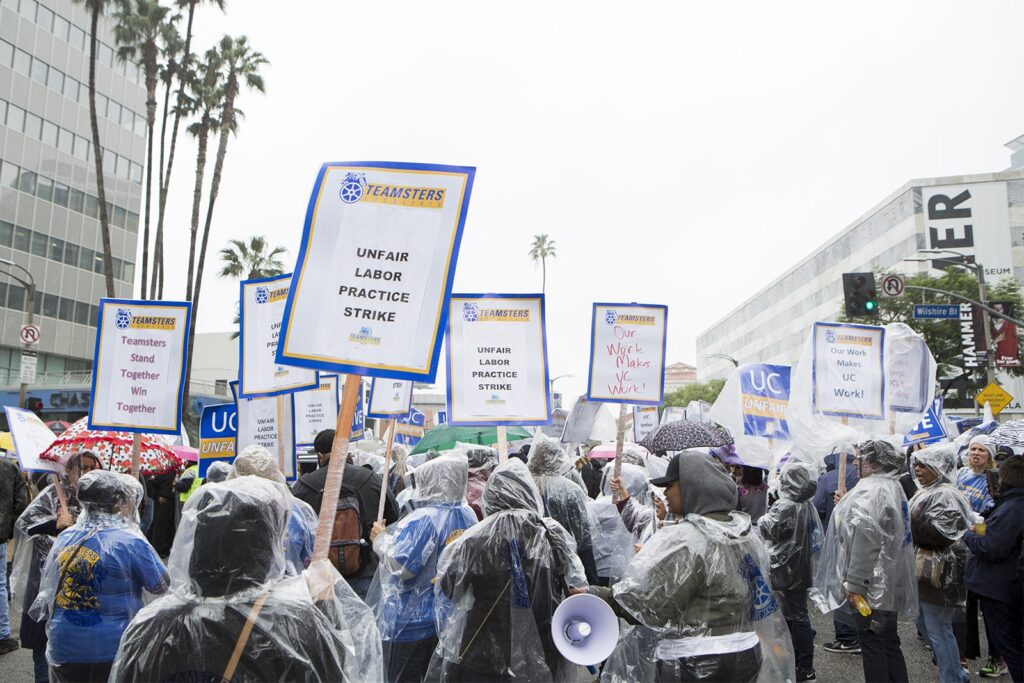 Protesters stood in front of the campus’ entry gate, holding signs with slogans such as “Our work makes the UC work” and “Pay workers enough to live in Santa Barbara County.”

Union members across the state surrounded medical centers at UCLA, UCSD and UCSF. UCLA skilled trade union members were on strike for five days in protest of their low wages, marching into Westwood on Tuesday and temporarily blocking traffic.

A 2015 Economic Policy Institute survey reported 92 percent of California union workers struggle to provide for themselves or their families.

The UC employees’ contract expired in November and representatives from each campus have been meeting with university administration to negotiate a new contract since April, but an agreement is yet to be reached.

UC has proposed an 18 percent pay increase over the next six years, but union members are saying the increase is not substantial. Furthermore, a UC spokesperson said in October that the UC “heavily subsidizes the cost of healthcare for our workers,” with those in lower paid positions contributing “as little as $47 a month for health benefits for their entire family.” The UC additionally offers a pension program with guaranteed payments on retirement.

Dissenters have called the strike unlawful, but Debbie Fingerle, chief steward of UCSB Teamsters, said the stalled contract negotiations have left employees working without a contract, so the no-strike clause does not apply.

“They will not negotiate in good faith,” Jedediah Johnson, office manager of the Teamsters Local 186 of Ventura, said. “We need to be at the table … and we need to learn about the cost of living and how much it actually cost with food, families [and] regulations.”

Food security is another concern of the union as they battle for higher wages. According to a 2016 survey done by Teamsters Local 2010 and Occidental College, 70 percent of clerical workers struggle to buy food and 45 percent are “food insecure” and often skip meals due to a lack of resources. The survey was sent to 13,661 UC employees, and their median wage was reported to be $22.65 per hour.

Brian Harwell, union member and the undergraduate advisor for the Department of Theater and Dance, said he is concerned about employees who struggle to provide food for themselves and their families.

“In a higher education environment that is expensive, where you have really high pay for certain people in the university, it just seems petty and brutal,” Harwell said.

Harwell said clerical employees provide a “significant role” on UC campuses, and he wants the strike to encourage understanding of the work they provide for the university.

“We’re classified as clerical, but there are certain people that run the department,” Harwell said. “We have our hands in all the nuts and bolts.”

Union workers hope Tuesday’s demonstration will pressure the UC to reach a contract with the employees that fulfills their demands. According to Fingerle, the union members are close to the results they want and “just need to push a little bit further” for their wage increases.

“[The university is] very slow in responding, which is part of the reason we’re striking,” Fingerle said. “On a whole, they do come back with something, but it’s just not enough, and they have what we need.”