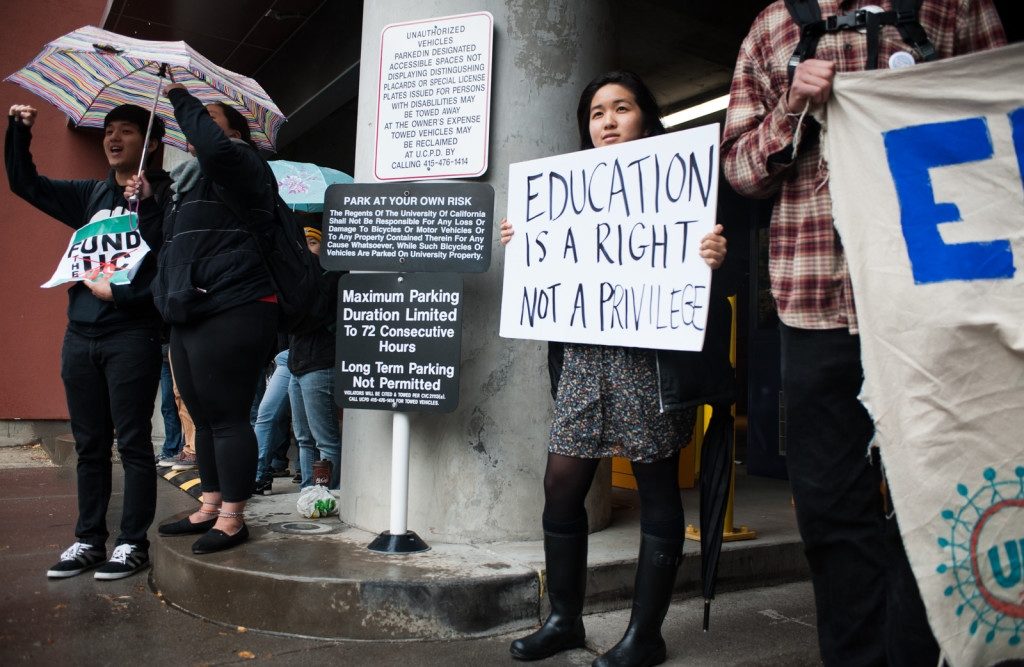 Protesters block an entrace to a parking garage near the UC Board of Regents meeting held in UCSF Mission Bay in 2014. Nexus file photo

According to the Governor’s budget summary, Brown proposes adding $131.2 million to the UC’s general fund, reflecting a four percent increase from last year’s allocation. The state would provide a total of $8.4 billion to the UC system in the 2017-18 fiscal year, if the state legislature accepts Brown’s proposal.

The funding increase reflects a negotiation reached between Brown and Napolitano in May 2015. In the midst of violent student protests, the two agreed to freeze tuition on the contention that the state provide a four percent increase in funding for the next four years. Brown and Napolitano also agreed in May 2015 that the UC would propose a tuition hike no greater than the rate of inflation for the 2017-18 academic year.

Keeping her end of the bargain, Napolitano proposed last week to raise tuition by 2.5 percent for the 2017-18 academic year, which could be the first tuition hike since 2011. In-state tuition has remained at $11,220 since the 2011-12 academic year, and this proposed hike will increase tuition by $282.

Anticipating the agreed-upon 2017-18 tuition hike, the UC Regents planned to lay the groundwork for a tuition hike proposal during their November meeting at San Francisco, but the discussion was tabled in the face of student protests.

UC President Janet Napolitano held a conference call last Friday with student journalists, during which she addressed the proposed tuition hikes, amongst other matters.

“In any event, I’m with students that tuition needs to be as low as possible,” Napolitano said in the call. “It also needs to be predictable, and we need to have generous financial aid to help those students from lower-income households. That is what we are striving mightily to do.” 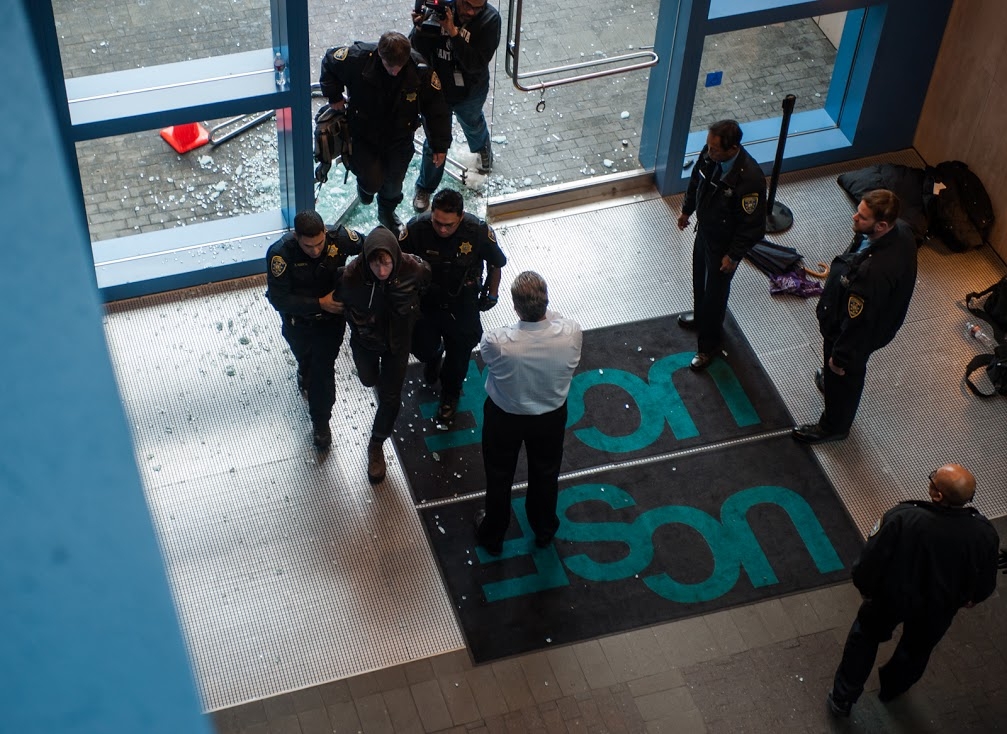 UCPD officers escort 21-year old UC Berkeley student Jeff Noven through the shattered glass entrance of the UCSF Mission Bay lobby. Noven was arrested on suspicion of felony vandalism and for inciting a riot, according to a spokesperson for UC San Francisco. Nexus file photo

According to Napolitano, the UC will maintain its current levels of financial aid if tuition is raised. An increase in tuition also means an increase in Cal Grants, she said, so low-income students will be able to receive more financial aid.

Also during the conference call, UC Office of the President (UCOP) spokesperson Dianne Klein said financial aid covers more than just tuition; it covers other “educational expenses” such as housing, transportation and food. She echoed Napolitano in saying the proposed tuition hikes could “provide more resources” to low-income students.

“It may sound counterintuitive, but the lowest-income students are really going to end up better off because they will receive more financial aid,” Klein said.

Despite this potential increase in financial aid, Brown’s budget proposal also included a phase-out of the UC Middle Class Scholarship (MCS) program, which provides financial aid to students with family incomes of under $156,000. Students currently receiving such aid would get to keep it in the next academic year, but Brown proposes the UC no longer award the scholarship.

In a press release Tuesday, Speaker of the Assembly Anthony Rendon dissented to both the proposed tuition hike and the proposal to eliminate the MCS program, which could increase the cost of attending a UC by up to $20,000, he said. Rendon did, however, support increase in UC funds, calling it “good” that higher education receive a “modest funding increase.”

“We must work to keep college affordable for California students, and I will not support burdening them with higher fees and greater student debt — whether that’s done by raising tuition or phasing out the Middle Class Scholarship,” he said in the statement.

Regents will discuss tuition hikes at their next meeting on Jan. 25 in San Francisco. Brown will submit a revised budget proposal for the state legislature to vote on in May.