The Carsey-Wolf center kicked off their winter season on Tuesday with a Script To Screen event featuring recent first contact thriller “Arrival”, a critical and box office success. After a screening of the film in Pollock Theater, host Matt Ryan was joined by screenwriter Eric Heisserer, a composed and genial personality who balanced interesting bits of background info with light banter that played well with the eager audience.

Readers should be warned that the stories Heisserer shared to supplement the film do, of course, spoil its brilliantly round plot, so those yet to enjoy it may wish to quit reading here. Those that may not wish to quit may wish to reconsider; “Arrival” presents a layered story that warrants and rewards a couple of considerate watches.

Adapted from Ted Chiang’s 1998 novella “ Story of Your Life,” the film follows Dr. Louise Banks (Amy Adams), a renowned linguistics professor tasked with helping the government communicate with the uncannily foreign alien lifeforms that have alighted on a Montanan plain (among 11 other locations around the globe). Heisserer spoke on the “hat trick” that Chiang’s story hit him with, where he felt “just gutted and tearful and a little joyous at the same time,” wondering “how can I inflict a wide audience with this?”

Despite the alien and international tensions presented, the emotional core of the story lies in the doomed relationship between Louise and her daughter, revealed in scenes that appear to be flashbacks at the film’s prologue and throughout its story, but take on a new light at its conclusion. “The first five pages and the last five pages stayed the same” throughout the writing process, Heisserer said, pointing repeatedly to the centrality of this tragic relationship as the movie’s rhetorical and emotional heart.

Part of this cathartic punch included aging down Louise’s daughter Hannah, who dies in the film from disease rather than the youthful recklessness of the original story. But Heiserrer noted how this decision was a matter of production as well as emotion: because of the reveal that (and once more, major spoilers follow) Louise’s flashbacks are in fact flashforwards due to the Tralfamadorian nonlinear perception of time imparted by learning the language of the heptapods, they would’ve had to age Amy Adams up, disrupting their own reveal had they let her daughter make it a little longer. “That blows everything,” Heisserer observes, going on to comment on the nature of her character’s temporally-questionable decision to have a child who she knows will die young that “it may be deterministic but we’re unaware of that, we still feel like we have choice.” He finds this paradox of determinism and free will makes Louise’s decision to raise her doomed daughter even more emotionally profound.

Because of the tricky way the script plays with time and audience assumptions, Adams’ opportunities for subtlety in her portrayal of Louise were numerous. Heisserer cherished her skill, attesting, “when you have a phenomenal actor that embodies a role for you, you find out just how little dialogue at places you actually need.” This plays out in subsequent viewings for those who’ve already learned the truths of heptapod thinking, and even Heisserer commented, “I certainly still find myself discovering things in Amy Adam’s performance that I didn’t catch in earlier screenings.” 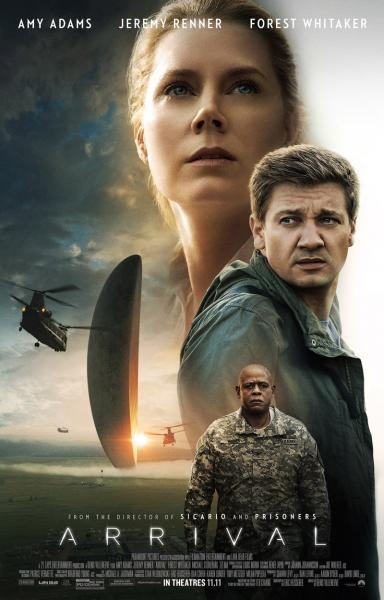 Another change Heisserer made during adaptation included increasing the military presence for dramatic tension’s sake, and along those same lines, the actual arrival of the seven-legged, hand-squid hybrid heptapods, themselves. Heisserer spoke of how in Chiang’s story the heptapods contact humanity via Skype-like technology, but how there’s “no tension at all there;” “what does that do geopolitically,” he asks, when the aliens arrive at our front door?

The writer spoke about changes he made during his own process as well. For a long while, the “gift” the heptapods intend to endow humanity with comprised not of their language and its time-transcendent influence, but of “different pieces of technology to make a ship so that we could… venture off and explore the stars on our own… and then Interstellar came out.” Aside from not wanting to hijack another film’s motif, Heisserer and director Denis Villeneuve didn’t want to leave their audiences with the impression that humanity had screwed up irrevocably; indeed, they opted instead to champion human cooperation and unity, reinforced by the circular, complexly interrelated nature of the alien language that fosters it.

When Ryan, joking about being unable to place graphics in scriptwriting software Final Cut, asked about the presentation of the logograms of the heptapod language on paper, Heisserer mentioned being wary of getting too novelistic in his descriptions about them. Spurred by a suggestion from his wife, he left spaces in the script and inserted the graphics manually. “I did that a hundred times,” he remarked, “I’m an idiot.”

Heiserrer described working with Villeneuve as “phenomenal.” In his previous experience, handing a script to a director “feels more like, sort of a hostage tradeoff on a bridge.” Imitating one of these past directors, he joked “maybe I’ll remember your name at the premier.” But Villeneuve was different. Heisserer described the long courtship period before the director attached himself to the project, where they would sit at coffee shops discussing philosophy, science, and religion. After five or six of these intellectual dates, he received a call from his new friend; imitating the director’s French-Canadian accent, he recounts the conversation that made the movie happen: “Ok Eric, now we are married.” The amount of care Villeneuve poured into the project really impressed Heisserer, citing him as the only director to give him calls to check the soundness of any changes he planned on making. This care carried throughout their Montreal crew. According to the writer, even the gaffers and grips read his script, creating a productive environment where “we were all trying to make the same movie.”

This crew unity was appropriate then, as “Arrival” stresses the coming together of people in spite of differences, the circularity and recurring connections of all things. The details Heisserer shared with the intrigued audience Tuesday night elucidated this and more, proving a revelatory experience in line with a course of Heptapod 101.
You can find the rest of this season’s upcoming Carsey-Wolf events, including more Script to Screens and a 35mm film Hitchcock series, at http://www.carseywolf.ucsb.edu/pollock.