The Daily Nexus
Science & Tech
A Voice Against Mental Health Stigma: Gary Tsai, M.D.
January 12, 2017 at 5:22 am by Jacqueline Wen 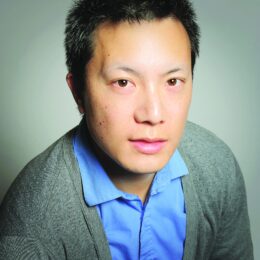 With the hopes of changing the negative connotation that comes with mental illness, Gary Tsai released his first documentary, “Voices,” which is a culmination of his interests and life experiences. / Courtesy of Gary Tsai

As the son of a mother with schizophrenia, Gary Tsai is quite aware of the stigma and criminalization of mental illness. These experiences were what inspired him to become a psychiatrist and a devoted advocate for those with mental illnesses. Tsai graduated with high honors from UC Santa Barbara in 2004 before pursuing his medical training at the UC Davis School of Medicine.

Currently the medical director and science officer of the Los Angeles County Department of Public Health, Substance Abuse Prevention and Control, Tsai has a lead role in revamping the system of care to provide a full spectrum of the prevention, treatment and recovery support services for substance use disorders for Los Angeles County’s 10 million residents. He also produced and co-directed “Voices” an award-winning documentary film about psychosis that premiered on public television in May 2015.

At the young age of 10, Tsai witnessed the beginnings of his mother’s condition when she unexpectedly made a comment about him thinking she was a bad mother.

“I knew I didn’t say that or think that, so I was just really confused,” he said. “Then, over the course of months to years, it started happening more, and I realized she was hearing me say things I wasn’t saying.”

It wasn’t until he grew older that Tsai realized she demonstrated the signs of schizophrenia. He and his family faced many challenges in trying to get his mother help, which initially caused him to be skeptical of psychiatry. Because his mother would behave well in the hospital, as well as deny her symptoms and show an unwillingness to be there, the doctors would release her. At home, however, things would unravel.

“So after trying to get her help and essentially being shut out by the system, I started not believing in psychiatry or what the purpose of mental health providers was when I knew my mother needed treatment and we couldn’t even get her in the door,” Tsai said.

It wasn’t until his third year of medical school — during his psychiatry rotation at which time he was pursuing emergency medicine due to its exciting nature — that Tsai discovered his interest in health care policy and had a change in heart about psychiatry.

“I was seeing people get better over the course of time that I was there, and I realized that our problem wasn’t a clinical problem in terms of not being a right medication [or] the doctors not being good,” Tsai said. “It was a problem of us not being able to access the system of care at all because of a system and policy issue.”

After an incident with his mother occurred during his residency, Tsai was inspired to get involved in advocacy work.

“My mother was arrested for trespassing; for nothing other than being psychotic in a public space — a post office — because people around her could clearly see that she was having some symptoms when she was talking to herself.”

Given his experiences working with individuals with severe mental illness, Tsai was well aware that this epitomized the criminalization of mental illness.

“That was really a profound experience for me because I knew there were millions of other families out there going through similar things, and they didn’t have the same experience in healthcare that I had and perhaps didn’t have the same resources,” Tsai said. “That really got me interested in advocacy work, because if this could happen to a cancer research scientist with her Ph.D. in biochemistry and a son who was a psychiatrist, this could happen to anyone.”

Dr. Tsai believes there are several effective means to address the stigma of mental health, including having a dialogue about these issues.

“We have never addressed stigma by not talking about something,” he said. “That’s one reason why I am so open about sharing my personal story … It shows that [I am] not scared of broaching this topic, and it also opens the doorway for other people to talk about their experiences, whether it’s personal or through someone they know.”

According to Tsai, another way of approaching this issue is to realize and understand that people’s behaviors caused by their mental illness may be out of their control.

“I think human nature naturally attributes behaviors to something that is under someone’s control. With mental illness, oftentimes the condition itself manifests in behaviors, whether it’s people lying in bed all day due to depression or talking to themselves because of hallucinations, and we oftentimes attribute blame to those behaviors because we think that if we can control our behaviors, others should too,” Tsai said. “But what we fail to understand is that if a condition impacts one’s behavior, we can’t really blame that individual for those behaviors any more than we can blame someone for having chest pain during a heart attack.”

With the nuances and firsthand experience of having a loved one with a mental illness, Tsai reflected his personal view of his mother in his portrayal of the three individuals and their families’ stories in “Voices,” his documentary about psychosis.

“My interest is in making an impact on improving the conditions of people who are disenfranchised, including those with mental illness. Given the broad reach of film, I thought a documentary was one of the best ways to do that,” Tsai said.

Despite the three stories being very different, their intimacy and relatability are what align them.

“That was really the inspiration for “Voices:” to humanize the psychotic condition and demystify it, to demonstrate that people with psychosis, people with schizophrenia, are humans and our loved ones,” Tsai said.

Tsai intended to evoke compassion, which he believes is a necessary and critical foundation to stimulating discussion on mental health issues.

“It is important because the first step to compassion is that we need to be able to relate to someone. You don’t have to have a family member or know of someone with schizophrenia or bipolar disorder or schizoaffective disorders to know how to relate to another human being,” he said. “So I think where it starts is how we view and feel about individuals with mental illness.”

He believes those two things, he is unaware they are his belief. He is unaware he could be educating positively.

Each time he voices a negative, he has missed the opportunity to educate people positively.