Despite coming off a convincing victory against Cal State Bakersfield just three nights ago and holding a lead that was as high as 20 points today, the UCSB men’s basketball team failed to defeat Seattle University on Friday ending 2016 on a disappointing note. 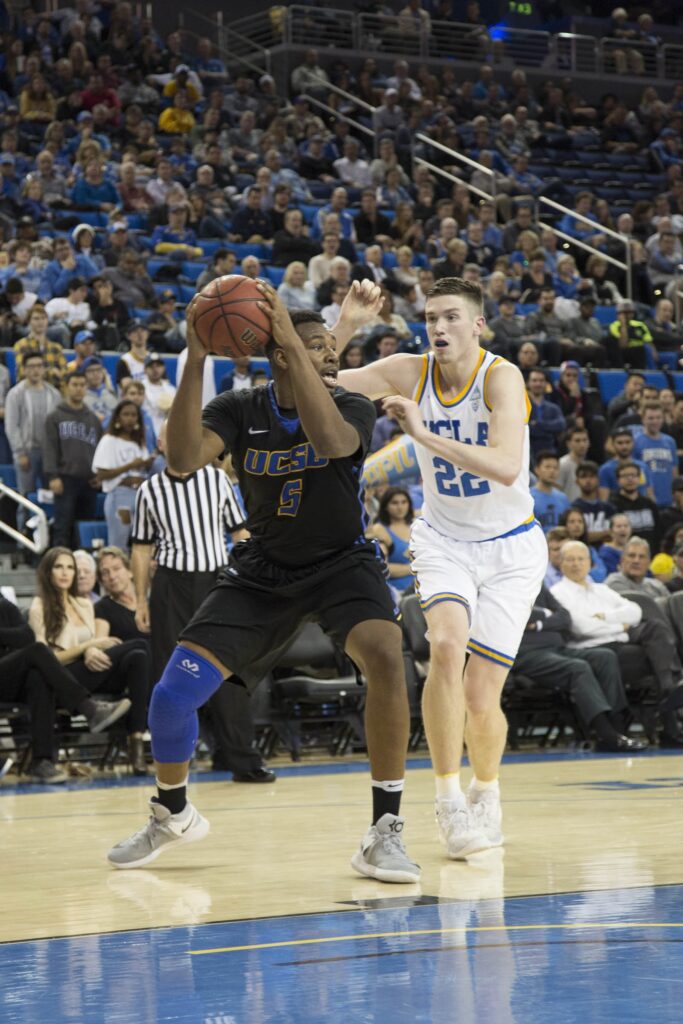 While looking for someone to pass to, Jalen Canty keeps the defender at bay. Dustin Harris / Daily Nexus

The 80-76 loss marks the end of non-conference play for the Gauchos who currently sit at 2-10. It also sets them back to a 2-3 record at the Thunderdome this season, a place they only lost five games the previous year.

Seattle University improved to 8-7 on the year and avenged the blowout loss it endured last season at the hands of UCSB.

Leading the first-half charge was junior guard Gabe Vincent who had 17 points in the first half, thanks to 6-11 shooting from the field including 5-10 from three-point range.

The 17 points marked the sixth time this season Vincent was in double figures by the end of the first half and his highest point total since scoring 20 in the first half against the University of San Diego.

Senior point guard Eric Childress also took on a big load scoring the first eight points for UCSB to help take the early lead. He would finish the night with 10 points, four assists, and six rebounds.

Contributions off the bench were also a big factor in the Gauchos 47-point first half outburst as freshman guards Clifton Powell and Max Heidegger had seven and eight points, respectively.

In what could’ve been one of the turning points of the game had UCSB not lost, Powell scored five straight points, off of two sweet dishes from Vincent, in the final minute to help the Gauchos take a 47-33 lead into the break.

For most of the second half, the Gauchos seemed to be in complete control of the game. Although Seattle had cut it to eight with 15:53 left after a 12-6 run to kick off the final frame, Santa Barbara responded with 16-4 run over the next six minutes to take a commanding 69-49 lead with 9:37 left to go.

The final 9:37 proceeded to be a painful experience for those who had hope that Gaucho basketball was finally turning the corner this year as they were outscored 31-7 in the final 9:37.

It all started with a convincing 14-0 run by Seattle University that brought them within six with 4:52 left. Sophomore guard Zack Moore was huge knocking down two three balls while senior forward William Powell came up with four huge rebounds and knocked in two big free throws during that 14-0 run.

Once Seattle cut the lead back down to single digits and had hope, it was redshirt senior guard Brendan Westendorf who broke the heart of all UCSB fans in the building scoring 13 straight points, including knocking down three consecutive three-point shots to give his team a 72-71 advantage with 2:04 left.

After taking the lead the Redhawks never looked back, finishing off the Gauchos with a clutch free throw shooting down the stretch and winning the game 80-76. Westendorf finished with 28 points on the night.

Growing pains are expected with this young Santa Barbara team, who is now even more limited after the losses of Ami Lakoju and Jalen Canty, but this one was especially painful. After shooting 9-20 from three in the first half, the Gauchos shot an abysmal 3-17 from deep in the second half, dooming what once seemed an easy victory.

One could only hope that with the new year approaching and conference play starting next week, the under-manned, young UCSB squad will tap into its full potential as it did last year, getting hot at just the right time.

The Gauchos next game will be at UC Davis in the Big West opener on Wednesday, Jan. 4 at 7 p.m.