The Daily Nexus
Sports
Reeling Gauchos Face-Off Against No. 2 UCLA
December 14, 2016 at 7:25 pm by Jorge Mercado

The 2016-17 campaign has not been off to an ideal start for the UCSB men’s basketball team, however, a huge upset win against the No. 2 team in the country, UCLA, could be just the thing to put this team in headed in the right direction. 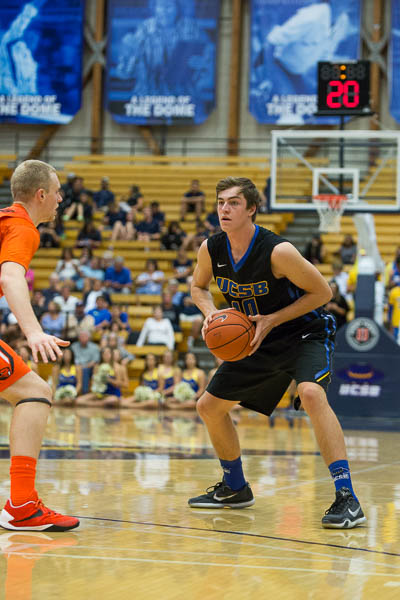 Santa Barbara travels to Southern California with only a 1-6 overall record and is coming off a tough loss against the University of San Diego on Sunday.

The Bruins play host to the Gauchos boasting a perfect record of 10-0 including three wins against other Big West opponents and a huge upset win over No. 1 Kentucky on December 3. UCLA will be in search of its 11th straight victory against the visiting Gauchos which would mark the program’s longest winning streak since 2008.

UCSB has faced some tough opponents this season but has not faced a top-two team in the country since facing off against No. 1 North Carolina back in 2008. The Tar Heels won the match 84-67.

Santa Barbara and UCLA will meet for the 20th time on Wednesday, with the Gauchos only having won one game against the Bruins which was back in 2003 in a one-point victory.

If UCSB has any hope of pulling off quite possibly the biggest upset in program history, then priority number one would be to stop the Bruins freshman point guard Lonzo Ball.

Ball has become a household name across the country within UCLA’s ten-game winning streak due mostly to his proficient passing ability. The Chino Hills, CA native is second in the NCAA in assists averaging 8.8 per game and has already notched four double-double performances.

On Nov. 30th against UCR, a fellow Big West opponent, Ball dished out 13 assists, breaking the record for UCLA’s single-game freshman assists record. Ball also averages 15 points per game, fourth best on the team, and is shooting a great 56 percent from the field.

Fellow freshman forward T.J. Leaf has also been nothing short of spectacular. The California native has averaged 17.6 points per game, second-best on the team, and 9.6 rebounds per game, best on the squad.

Senior guards Bryce Alford and Isaac Hamilton have also played spectacular with Hamilton leading the team in scoring with 17.7 points per game, and Alford scoring double figures in nine of the Bruins’ ten games this season.

As a team, the Bruins have looked unstoppable offensively in most games they have played this season scoring at least 90 points in seven of its 10 games this season.

Certainly, taking on this hot team at the Pauley Pavilion will be a tough challenge, but something most Gauchos is up to. UCSB is led by juniors Gabe Vincent and Jalen Canty.

Both players had excellent games on Sunday against the Toreros, with Vincent scoring 20 points in the first half on 8-11 shooting. The guard would finish with a game-high 23 points on the night. Vincent averages a team-high 17.3 points per game.

Canty had a less than stellar first half scoring no points and only pulling down one rebound. The forward turned it around in the second half scoring 14 points shooting a perfect 6-6 from the field and pulling down three rebounds before fouling out.

The Gauchos will need to look to those two early and often if they want to come out with a win and will also need hearty performances from senior guard Eric Childress who leads the team in assists with 4.3 per game and has knocked down at least one three ball in six of the teams’ seven games.

Wednesday night will not be an easy one for this struggling Santa Barbara squad. However, a solid performance on the road against such a quality opponent could be the thing the Gauchos need. Whether or not there will be an upset alert tonight, fans should expect a tough performance from a Gaucho team that, although has only one win, has played hard in every game.

UCSB faces off against the No. 2 UCLA at 7:30 p.m. at the Pauley Pavilion on Wednesday, December 14 with the game being available to watch on the PAC-12 network.