The Daily Nexus
Science & Tech
Not Rocket Science, but Pretty Close (Comet, Like and Subscribe)
December 14, 2016 at 1:48 pm by Kelly Shi

Three years ago, the Chelyabinsk meteor entered Earth’s atmosphere and exploded over Russia, generating a bright flash and producing a large shock wave. The meteor’s blast damaged thousands of buildings and resulted in a large number of injuries. The consequences of this undetected meteor spurred the idea of a spaceguard system to protect the planet from similar happenings in the future.

Prior to the impact, the UCSB Experimental Cosmology Group had diverted its focus to planetary defense, a maneuver that quickly gained traction upon extensive media coverage of the Chelyabinsk meteor. Had the meteor entered Earth’s atmosphere more steeply, it could have led to a much greater tragedy. As a result of the impact, new endeavors to conduct research on directed energy deflection were under way.

At UCSB, these endeavors are accompanied by one promising student’s rise to stardom on account of his outstanding contributions to the research effort, investigations with the potential to quite literally impact our Earth.

Qicheng Zhang is a fourth-year undergraduate student in UCSB’s College of Creative Studies for physics. He was recently awarded the nationally competitive and prestigious Barry Goldwater scholarship to financially support his ongoing research path in planetary astrophysics. He also received a Thomas R. McGetchin Memorial Scholarship from the Universities Space Research Association, which is awarded to only four undergraduate students each year.

Zhang addresses a problem in modern research efforts: current studies focus on asteroid diversion, with little thought given to comet threat. Zhang explains that comets are a lot like asteroids in that they’re basically “space rocks” that could potentially hit the earth. 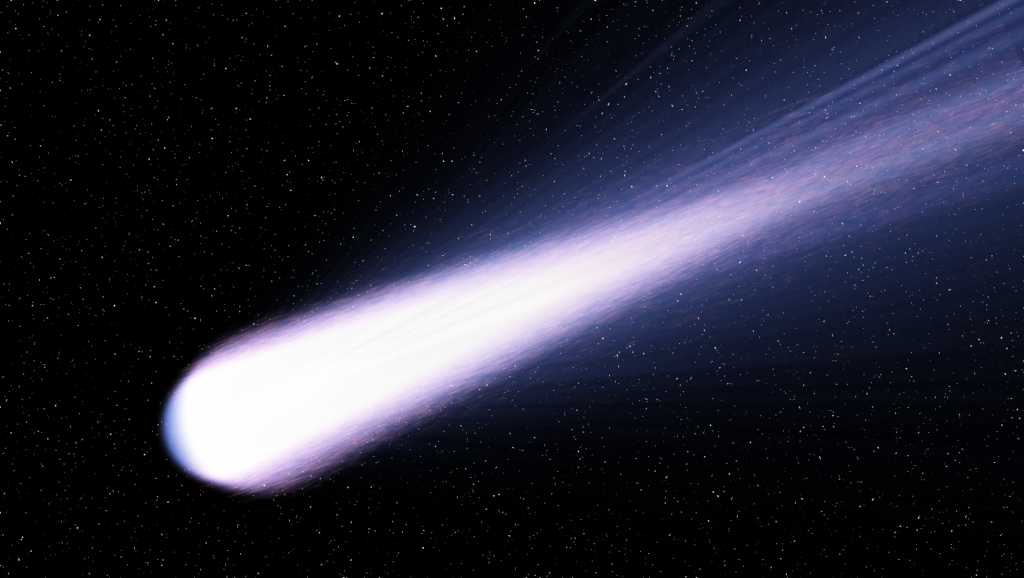 Qicheng Zhang, a UCSB fourth-year undergraduate student in CCS physics, is an aspiring astrophysicist who is currently conducting research on comet deflection. / Courtesy of Alpha Coders

“There are fewer comets that pass near the Earth’s orbit, so in some respects, they’re a smaller threat to the planet than asteroids,” said Zhang. According to Zhang, however, there exists a number of large comets, whose nuclei range from several hundred kilometers to over a thousand kilometers across, that are possible causes for concern.

“The difference between a comet and an asteroid is mostly in its composition,” said Zhang. Comets are primarily composed of ice and dirt, while asteroids are primarily composed of rock and metal. A comet’s composition makes it much easier to deflect using a laser because a lower temperature is needed to start vaporizing the body. The vapor pushes the comet away, moving it from an original trajectory to a new trajectory that won’t hit the Earth.

“A second difference between comets and asteroids are their orbits,” said Zhang. Asteroids have orbits comparable to that of the Earth’s: near circular orbits that can get pretty close to the Sun. A comet, however, would lose its form if it had a similar orbit.

“In order for a comet to survive, it has to have an orbit that starts out from very far away from the sun and only passes close to the sun, and therefore the Earth, for a very short period of time before leaving,” said Zhang.

A consequence of this, Zhang explains, is that a comet remains virtually undetected until moments just prior to a potential impact.

“We’ll only have, at most, a couple years or so of warning before it actually hits,” said Zhang. He admits that there could be an undiscovered comet and unexpected collision in the near future, but this is probabilistically unlikely.

The possibility, however, is worth the pursuit.

Zhang is currently dedicating his efforts toward the pursuit of laser technology in astrophysical applications, an ongoing project that involves several mission proposals. The first suggestion is to place a big laser in Earth’s orbit, specifically an array of multiple lasers that are phase-locked in a way that creates a concentrated target spot.

Another proposal is to have a laser on the ground, which would save the cost of launching an object into space. Additionally, the laser could be hooked up to an existing power infrastructure rather than a large solar panel accompaniment in space. One drawback to this idea is inaccuracy caused by atmosphere-induced distortion. Nevertheless, there are current technologies, mainly developed for telescopes, that may be modified to counter these obstacles.

Zhang explains that the smallest useful laser array size is in the order of a few hundred meters in diameter, which corresponds to the power of several gigawatts.

“The thing with laser power is that you don’t necessarily have to keep it on the whole time at several gigawatts. And in fact, if you’re in space, you’re not going to have several gigawatts of power from your solar panel,” said Zhang.

One possibility to consider is controlling the laser’s operation times; it could be turned on at high power for a short period of time to vaporize the material from the comet.

Zhang acknowledges a major problem — laser overheating — which is especially difficult to gauge in space.

“Technology has improved in a lot of areas, but with radiators, they really have stayed mostly unchanged. So, that’s the main bottleneck with high laser power in space. That, and the size of your solar panels,” said Zhang.

Although the planetary defense committee has not deflected anything yet, these projects and planned proposals are useful precautionary measures. Eventually, statistically speaking, there will be an object that is going to hit the Earth. Zhang believes waiting for such an occurrence is costly in both time and finances.

“The less time you have, the more expensive your system is going to be,” said Zhang.

Zhang’s lab includes multiple ongoing projects that address diverse planetary defense problems, strategies and inquiries. The lab contains a laser system with multiple 50-watt lasers and a vacuum chamber. By utilizing different laser powers and materials, this setup is used to test and measure the different amounts of force pushed onto rocks.

A similar project involves measuring the spectra of an asteroid. When a material is vaporized, it creates a sizable cloud of dust or gas, which absorbs certain wavelengths as light passes through. If the colors are separated, the absorbed lines can be observed. The reflectance spectrum can then be used to determine the composition of the asteroid.

A long-term project of his own, Zhang hopes to get involved in future planetary research on small bodies like asteroids and comets. Planetary defense strategy is just one subdomain of astronomy, yet to him it is an ever-expanding sphere of mysteries, just like our universe.