Remaining winless on the road after its loss to the University of San Diego during the Thanksgiving break, the UCSB women’s basketball team will look to recoup at home when it hosts Santa Clara Wednesday night. 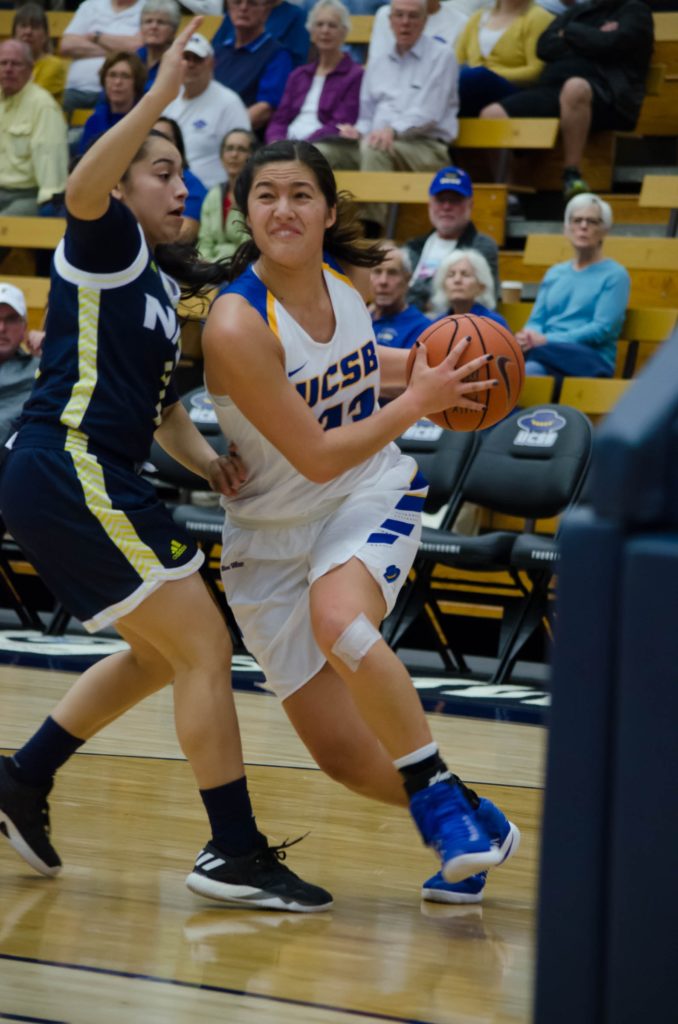 Currently 2-3, earning their two victories when playing at home this season, the Gauchos will look to extend their undefeated home record. Matching UCSB in the win-loss column is Santa Clara entering at 2-3 as well.

The Broncos have a one-game advantage in the all-time record against the Gauchos of 6-5.

Santa Barbara will hope to draw even in the matchup after losing twice to the Broncos last season. Santa Clara dominated the Gauchos in both games, defeating UCSB by an average of 14.5 points per game.

Four of five starters returned for Santa Clara this season as the familiarity has been helpful with three Broncos currently averaged double-figures in scoring with roughly 12 PPG.

Within this group of three are two of the team’s returning starters in senior forward Marie Bertholdt and junior forward Morgan McGwire. It was McGwire, who led the Broncos in each matchup, scoring with 13 points apiece.

After redshirting last season, completing the trio of scorers, the newest addition to the lineup   is redshirt sophomore guard Emily Wolph. She is the Broncos’ markswoman from long range as she makes and attempts the most three-pointers per game on the team at 2.2 makes and 5.6 attempts, respectively. She is second on the team behind McGwire in three-point percentage at 39.3 percent.

Still, the Broncos’ size is what poses the most difficult challenge for UCSB’s defense.

In the first game, the Broncos managed to outrebound UCSB 45-31 in addition to outscoring them in points in the paint 28-14 and second chance points 24-7. Following this game just two weeks later, Santa Clara continued its dominance shooting 45. 1 percent from the field while outscoring UCSB in the paint 32-18.

Given the Broncos’ ability to control the interior, it is obvious that the Gauchos will look to have a stern defensive presence in the frontcourt.

“We’ve got to handle their size,” Head Coach Bonnie Henrickson said. “We’re still small on the perimeter. I thought their size bothered us last year not just inside, [but also] on the perimeter [just as much]. If we’re not going to be as big, we have to be able to play fast.”

While playing with at a fast pace may be most beneficial for UCSB, the Gauchos will hope to sustain their momentum from last game after tallying season-highs in field goal percentage at 46.2 percent from the field and 41.2 percent from behind the three-point line.

UCSB’s cold shooting in last season’s two games did not help their attempt to contain the Broncos’ size as UCSB shot below 30 percent from the field and beyond the three-point line in each game.

Giving the Gauchos a better chance to compete against the Broncos’ inside presence is redshirt junior forward Drew Edelman. She enters Wednesday’s game leading the Big West in field goal percentage shooting 62.8 percent from the field and is one of two Gauchos, alongside sophomore guard Coco Miller, to average double-digit PPG at 12.2.

At the brink of becoming another Gaucho to average double-figures in scoring is redshirt sophomore Sarah Porter. She averages 9.4 PPG and is third in the conference in total three-pointers made with 11. Porter’s 42.3 three-point average also ranks eighth in the Big West.

Put in the team’s starting lineup two games ago, Porter is still adjusting to her role after beginning the season on the bench as she emerges as one of the Gauchos’ top scorers.

Yet, in order for UCSB to establish consistency on the offensive end, it must be efficient with possession of the ball. In its last matchup against the Broncos, UCSB had a season-high 31 turnovers.

Despite being able to force Santa Clara to turn the ball over in the two games with 29 and 24 turnovers, respectively, UCSB was still outscored by the Broncos in points off turnovers each time.

With Edelman in the paint, it is plausible that the Gauchos’ ability to disrupt the Broncos increases as UCSB’s frontcourt has the ability to compete on the boards, which will help put the team’s up-tempo plan in motion.

Wednesday’s matchup between UCSB and Santa Clara will tip-off at 7 p.m. in the Thunderdome.