After a short break, the Harry Potter franchise returns with a conflicted prequel that has difficulty finding its own voice. Unlike other prequel series, “Fantastic Beasts and Where to Find Them” is brave enough to detach just enough from its enormously successful predecessor, introducing characters unlike that which we’ve seen before and tones that are at times hilarious and genuinely troubling. However, the film relies too much on its pre-established and well-realized setting and lore, losing its grip on executing anything original, fumbling around with its clashing tones and plots.

“Fantastic Beasts” follows magical zoologist Newt Scamander, played by Eddie Redmayne, as he journeys to New York in the 1920s. Upon arrival, Newt immediately loses and unleashes his misunderstood creatures and heads out to find them with unlikely and newly found friends. All the while, a conflict between wizards and the No-Maj (American’s version of the Muggle, those who don’t practice magic) seems to be brewing, as a dark unknown force begins to terrorize Manhattan.

Instead of working together, the duel plots of “Fantastic Beasts” are constantly at odds. The first plot, which follows Newt and his friends, is at times charming and hilarious, focusing on the revealing of magical beasts or fantastic locales. Sadly, it never develops its characters and chooses to rely on the setting as a crux for its content. And while the concept of tracking down monsters is a rather fresh and intriguing one, it’s rarely utilized and mostly, disappointingly, absent from the film.

The other plot, being far darker, verges on the macabre, and takes itself rather seriously, although it is never given enough time to be anything more than a tease for the eventual climactic reveal. However, some things accomplished during this tone are incredible and disturbing, a welcome risk into darker and controversial territory. The potential conflicts raised here are more compelling than what was seen at Hogwarts, but fortunately for the original series, and unfortunately for the audience, these conflicts are never really explored and are laughably resolved. In the same intensified way, it would have been nice to see the light-hearted moments push farther into the ridiculous and the comedic. 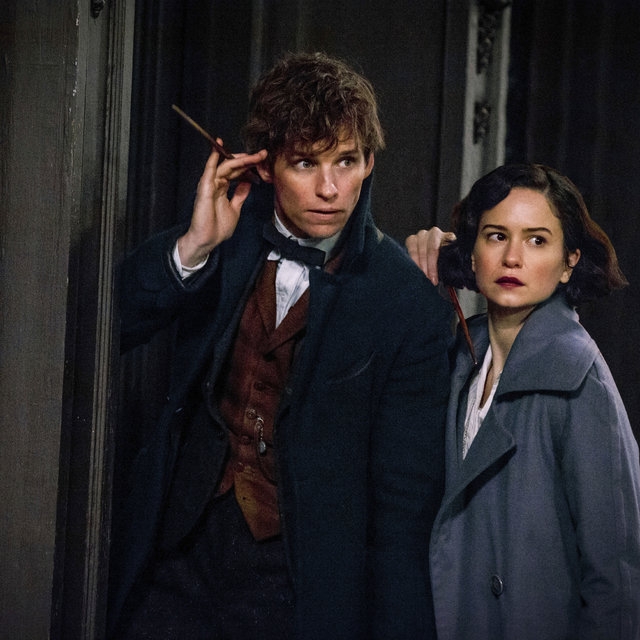 The two tones work well on their own, but there is not much effort given to bring the two together, resulting in two separate films that are thin in content. In addition, any time spent with each plot is plagued by strange and counterproductive pacing. The film spends too much of its time in unimportant places and rushes right out of where it should be staying.

The best aspect of the film by far is its production design. From the adorable and inventive creatures, to the stunning magical sets, “Fantastic Beasts” establishes its world flawlessly, engrossing the audience for its entire running time. No doubt benefited by the world already established by the Potter franchise, “Fantastic Beasts” still manages to feel both refreshing and nostalgic. It’s pure bliss. This magical side of New York is just as much as an enjoyable spectacle as Hogwarts was, and with the added 1920s time period there’s a sense of style and maturity that demands to be taken in. The film is fun and makes you feel like you’re a part of the world around you. But while the setting and peacoat costumes may look incredible, the characters that tenant these designs are rather bland and shortchanged.

Stand out performances by Dan Fogler and Colin Farrell do their best to provide the film with enjoyable characters. Fogler, who plays Jacob Kowalski, a hopeful No-Maj baker with his heart on his sleeve, is genuine and hilarious, eliciting a contrasting humor to the forced absurdity of his situation. Farrell, who plays Graves, director of magical security, provides an elusive, dark character that is mysterious in motivation thanks to his complex and seemingly honest presentation. These two easily steal every scene they’re in. The other characters, however, are not so great.

Katherine Waterston’s Tina is not only incredibly awkward, but awkwardly performed. Her gawky nature is rarely charming and her character never really clicks. In the same guise, Redmayne’s Newt is also awkward, but manages to provide a quiet and reserved charm. Even so, his quirks are too subtle and are rarely used to make him an interesting character. His lopsided grin and aversion to eye contact begin to mold him into a unique character, but his development stops there. Even with a 133-minute running time, none of these characters are given enough to be fleshed out.

A creative, yet thin product, “Fantastic Beasts and Where to Find Them” is torn between far too many things to become anything outstanding in and of itself. It’s visually engaging, but incredibly hollow and directionless. It’s remarkably fun and comical, but by no means memorable. Without the Harry Potter backing, “Fantastic Beasts” could have become another failed attempt at creating a new fantasy franchise. There’s more good than bad to find here, but it’s definitely a personal weighing of pros and cons.

The characters are undeveloped and the plot is barren, yet the ride is exciting, and at times quite a blast. The lack of content can even be overlooked for the film’s spectacular immersion. It’s a mindless blockbuster, but it has just enough quirk and creativity to keep it afloat and overcome most of its problems. Nonetheless, it’s not really about finding fantastic beasts or about anything else for that matter.

While it’s far from fantastic, “Fantastic Beasts and Where to Find Them” is by no means “The Phantom Menace,” and if you’re looking for a hollow yet visually stunning, well-produced and fun blockbuster, it is a must.

Disagree. Great film all around.