As Campbell hall filled with attendees, anticipation for Neko Case grew at the sight of the dim purple lights and the array of instruments on stage including everything from drums and guitars to keyboards and cellos. The audience, which was comprised by a majority of older adults and a few UCSB students, filled nearly every seat last Friday night at the venue.

Prior to the main performance, musicians Erica Bachmann and Jon Raunhouse set the tone of the evening with their quirky two-man folk performance. While the two are usually on scene as backup to Neko Case, it was a refreshing surprise for their sound to open as the forefront of the show. The night was kept at a casual pace set from the beginning

As they progressed through their set, songs seemed to tell a story or paint a picture to illustrate the mood in addition to feeling it. The ruminative quality of their sound was able to carry a brief escape from the trials and tribulations of reality. Scenes of an autumn day came to pass in songs like “Lilliwaup,” while “Asthmatic Gypsy” illustrated what a waltz in Paris may feel like; it was as if the audience was transported to the particular place in time being told. Lyrics in most of the performance were not necessary as the latitude of instruments effortlessly shifting from song to song by the artful and talented minds of the light-hearted artists was more than enough. My personal favorite, “Lupe’s Lament,” effectively showcased their repertoire of tunes that were both engaging and thoughtful.

When Neko Case was introduced, the audience fell to an unnerving silence awaiting her start. Both Bauchmann and Raunhouse accompanied her on the stage, set to be her backing band among two other members of the group.

The singer-songwriter stole her audience’s breath with captivating instrumentals and lyrics, overwhelming the crowd with an array of feelings. The sweet, humorous singer opened with “The Pharaohs,” and proceeded to wow every single individual in the theater.  Neko Case can really sing. Her albums The Worse Things get the Harder I Fight and Middle Cyclone don’t do her voice as much justice as her live performance. The force of her words came from somewhere deep within her lungs and erupted in pitches that can only be described as a hurricane of force that still holds true to its graceful magic. I didn’t know it was possible for one voice to make a whole crowd feel connected in a range of emotions: from wholesome happiness to nostalgic sadness, all within its pitch.

There was love, there was sadness, there was an eeriness that brought about a haunting warmth. The humble artist not only charmed us with the highest and highs and lowest of lows, but let her own feelings guide her performance. It was obvious through her facial and body expressions, Case felt her songs on a deeper level as she sang them, showing that even the most talented are only human. 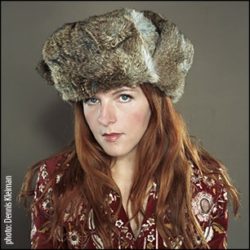 Poetic lyrics such as “Brave to the waves of its residue/ Its laughter from a marbled room/ The white-crowned sounds of possible/ The sound that lures me/ It says, ‘Don’t you hurry/ Don’t you worry, kid,’ we’ll be seeing you/ We’ll see you when you’re ready” from “Ragtime” filled every space of the theater with powerful sound.

The audience was enthralled throughout; their content disposition was most evident in the soft whispering of lyrics to songs such as “This Tornado Loves You,” and an array of smiles, myself included, couldn’t be helped. The songwriter’s most popular song “I Wish I Was the Moon” stole the show, as many started applauding at the recognition of chords from the start.

There was something pure of the way Case poured her heart into her own words, making them echo against the walls of Campbell hall with intention. The country-folk-rock song writer appearing in casual, bare-faced winter attire looking ready to curl up next to a fire rather than perform. But this is a part of what makes Case so special. Her passion toward her music paired with an uncaring attitude to how she represents herself is exactly what draws the audience in closer, literally. Dramatic pauses followed by explosions in songs like “Bracing for Sunday” and “Look for Me (I’ll Be Around)” had her crowd on the edges of their seats, as the ringing of the last note hung in the air and the suspense of the next one to follow built up.

In between sets, conversation was kept to a minimum, but mentions of 2016 being a dark year led to a change in the pace with what Case calls her “most joyful song.” “Man,” the last song of her set, ended on a bright note that brought liveliness to the stage. Its freeing feel with sounds originating back to her older work graciously stole away the reality of now. While it may have been the last song, the audience cheered wildly, eager for an encore that was granted with “Middle Cyclone.” This was paired with side note summing up her performance nicely as songs that “make you laugh and punch you in the stomach at the same time,” before bowing and leaving the stage with a standing ovation.