Despite a strong start by the UCSB men’s basketball team at USC, the Trojans went on a 30-13 scoring run in the final 8:05 of the second half destroying any chance the Gauchos had to pull off the upset and register their first win of the season.

Coming into the match, the Trojans were 4-0 at home through five games, averaging almost 81 points per game. That didn’t change against the Gauchos as the home team was able to score a season-high 96 points in its rout. 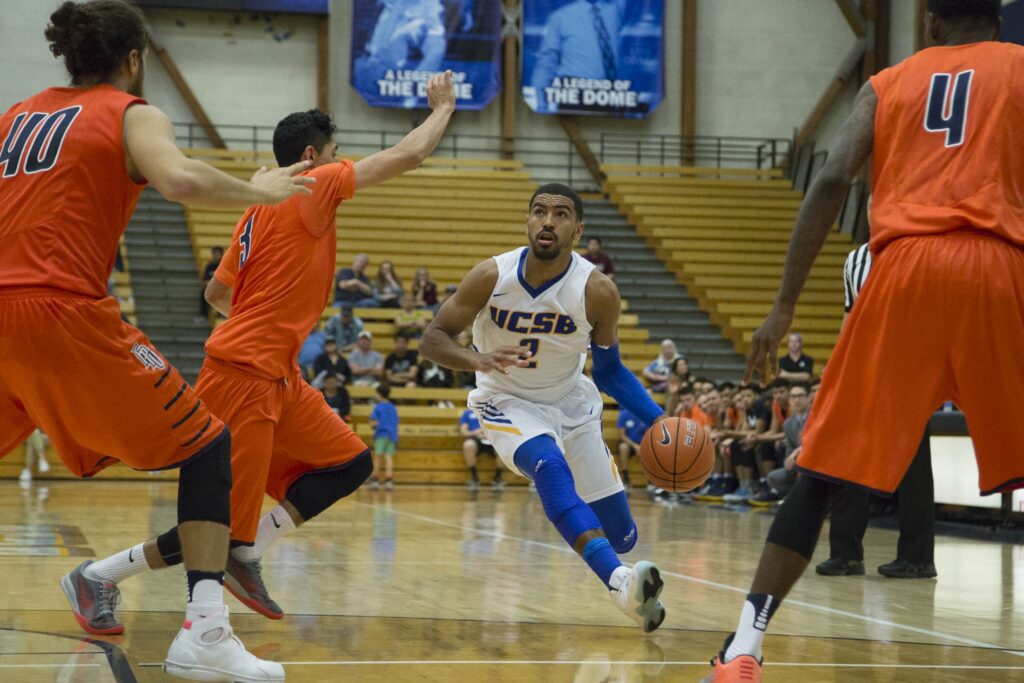 Despite managing to hang around for most of the game with a solid 45 percent shooting from the field and having four players in double figures, UCSB had no chance of stopping a red-hot USC team who shot 54 percent from the field and was deadly from three knocking down 14 long balls, a season high.

In fact, the Trojans were excellent with the three ball from the very beginning knocking down four of their first six attempts — two from junior standout guard Elijah Stewart — within the game’s first four minutes to take a commanding 14-6 lead.

Santa Barbara answered throughout the majority of the match thanks to strong play from senior guard Eric Childress and junior guard Gabe Vincent. After a Vincent three, Childress matched him with one of his own to bring the score to 16-12 with 14:11 left in the first half.

The next eight minutes consisted of back-and-forth baskets by both teams with USC’s lead never growing larger eight. After a layup by junior forward Alex Hart, the Gauchos found themselves only down by two at 25-23 with 6:36 left in the first half. Hart finished with a season-high 14 points after shooting 7-14 from the field in, another season high, 26 minutes.

Once UCSB cut the lead to two, USC went on a 16-8 run to take a 10-point lead with just over a minute left to play in the first half. Sophomore forward Bennie Boatwright scored 10 of those points during the run and finished with a game-high 21. Santa Barbara managed to make it close before the half only going down 43-38.

Although UCSB kept shooting well throughout the half, which led to them constantly cutting the lead, USC’s three-point range was so deadly that Santa Barbara could never tie the game let alone take the lead. In the first 20 minutes, the Trojans were 8-19 from three while the Gauchos were only 3-11.

With the beginning of the second half came the resurgence of redshirt sophomore forward Ami Lakoju. The Harlem, N.Y. native only scored a total of nine points in his last three games, but scored six of his teams first 10 to spring the Gauchos early in the second half.

He would cut the lead to four with a big tip-in at the 14:23 mark, making the score 51-47. Lakoju would finish with 12 points in the contest. After back-to-back Trojan three’s, Childress responded with his second of the match to keep the score within single digits. The senior finished the contest with six points and a season-high seven assists.

However, as the second half continued, the same thing that doomed the Gauchos in three of their first four losses came to fruition yet again at the Galen Center. After a UCSB lay-up making the score 66-59, the Trojans finished the game on a 30-13 scoring run making the final score a 96-72 rout. Stewart had eight of those final 30 points and finished the night scoring 18.

Yet again, the second half woes seem to continue hurting Santa Barbara, who, at times, just cannot seem to get out of its own way. Despite the loss, there were many positives such as a season-low nine turnovers, the resurgence of Hart and Lakoju and scoring 44 points in the paint.

Junior forward Jalen Canty also finished with a monster game posting the second double-double of his career with a career-high 16 point and 10 rebound performance.

Although a 0-5 start is not ideal by any means, the Gauchos have the pieces in place to turn this season around as it is still very early, and with more and more contributions starting to come from younger players fitting into their roles, this could happen sooner rather than later.

UCSB resumes play against Sonoma St. at 7 p.m. on Thursday, Dec. 1 at the Thunderdome.