The UCSB women’s volleyball team concluded its season on the eve of Thanksgiving, losing its third straight match in a 3-0 sweep to UC Irvine. 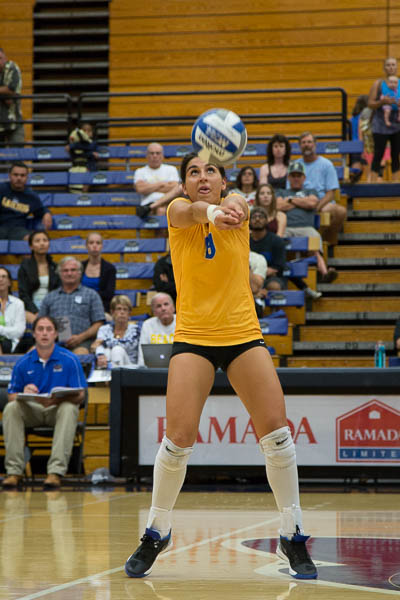 Santa Barbara was able to best the Anteaters in kills in the first set 13-12, but its three more errors proved to be the deciding factor as the Gauchos lost 25-20.

The two teams began in lockstep, trading scores and leads several times throughout the beginning of the set. After playing to a 13-13 tie, two kills from redshirt junior middle blocker Danielle Geiger and an attack error from UCSB freshman outside hitter Chloe Allen gave Irvine a 16-13 lead.

Though the Gauchos continued to battle, that distance proved sufficient for the Anteaters, who held the lead for the remainder of the set.

UCSB was again able to keep it close through the beginning of the second frame, though the train went off the rails a bit earlier for the Gauchos in this one. After achieving a seven-point tie, UCSB lost the lead, never to gain it again, falling 19-25 to the Anteaters.

The third set was the Gauchos’ best showing, as if they’d realized the end of their season was staring them directly in the face.

Playing with an increased sense of urgency, the Gauchos were able to extend their close play with UC Irvine far past their earlier watermarks, even taking a 20-19 lead into the final stretch of the set. Two kills from sophomore opposite hitter Harlee Kekauoha and one from freshman outside hitter Loryn Carter gave the Anteaters the lead, however, and the Gauchos were unable to get it back, losing 25-23.

A disappointing season’s end for the Gauchos, the team’s inconsistencies mounted after having successive blows dealt to their postseason chances over the past two matches. Losing to UC Riverside put the Gauchos on the outside looking in, and last Saturday’s loss to Hawaii relieved UCSB of all playoff hopes.

Senior middle blocker Elizabeth Sheffield was the only Gaucho to top double-digit kills in the match, finishing with an even 10 in the final exhibition of her career. Redshirt freshman outside hitter Lindsey Ruddins could only muster nine kills on 31 attempts, finishing with a .194 hitting percentage, far below her usual output.

Sheffield’s fellow senior middle blocker Phoebe Grunt finished with six kills on 11 attempts for the Gauchos, while Chloe Allen was able to add eight of her own. Redshirt freshman setter Hannah Juley finished with 30 assists, right in line with her conference average of 10.21 per set.

Juley was outpaced by UC Irvine senior setter Shelley Anderson, however, who finished with 37 assists on the night while also contributing eight digs over the three sets.

Sophomore libero Emilia Petrachi was her usual self for the Gauchos, finishing with 13 digs (4.33 per set), far outdoing the Anteaters’ junior libero Luna Tsujimoto, who reached only six.

Though this was not the way the Gauchos wanted to end the season, the year was beyond a doubt a productive one. UCSB was able to establish itself as an up-and-coming young team, with several of its best players returning next season.