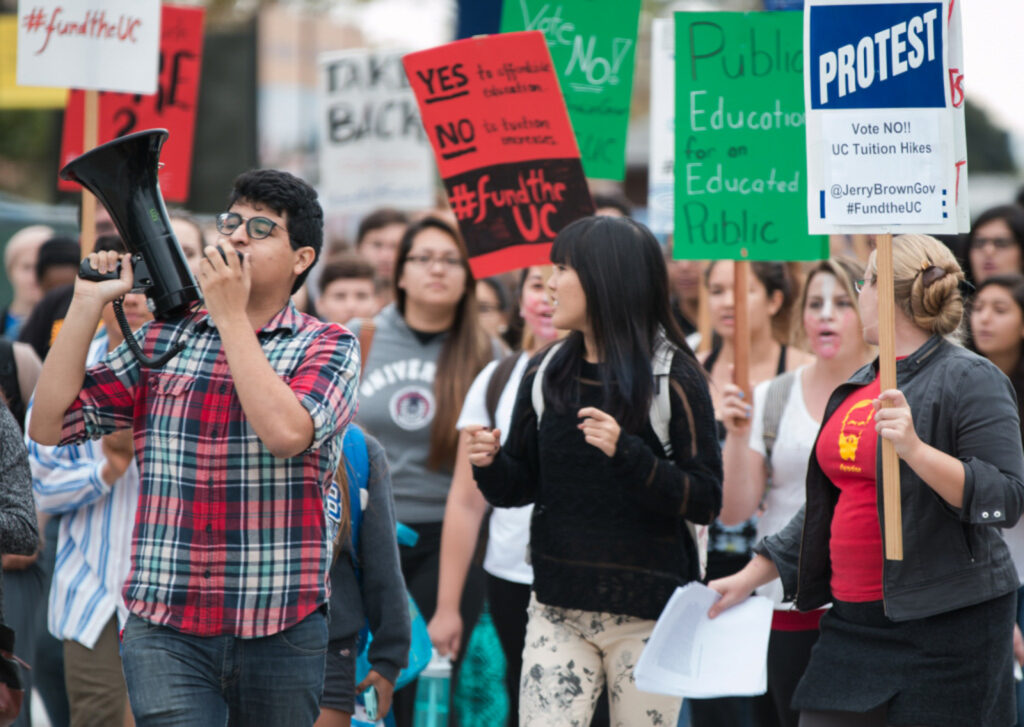 Students held a rally on Nov. 20, 2014 against proposed tuition hikes by the University of California Board of Regents, which called for an annual 5 percent increase in tuition over the next five years due to a lack of state funding for the UC. Nexus file photo

Approximately 150 students from several UC campuses gathered outside the UC Regents meeting Thursday in protest of a proposed tuition hike, forcing the Regents to table its approval until January.

Washington said the protest was successful in its goal to “bring attention to student perspective,” but the Regents’ decision will be unknown until the meeting in January.

The protest began at 8 a.m. with protestors gathered outside the building and chanting at the Regents as they entered. Protesters employed four basic tactics: a banner drop, human chain, spelling out S.O.S. and camping in tents outside the meeting.

“We want to make sure students are comfortable at all levels,” Erica Perez said. “Not everyone can come out to say what we do; we’re out there for those that can’t be there.”

To ensure the wellbeing of students, a “wellness leader” handed out water and snacks to protesters.

Tensions increased during the meeting when Regents attempted to cut it short, much to the dismay of any protesters who had bussed overnight to attend the meeting. Regent John Perez suggested holding another open comment period to hear student concerns, but was denied.

“Things could have easily been smoother if they allowed the students to make a public comment,” Erica Perez said. “They constantly make decisions for us; we need to be included in these conversations all the time.”

“The hope is that we adopt a conversation,” Washington said. “Many students face basic needs insecurity.”

The UC Food Security and Access Study conducted by the Regents found nearly 20 percent of students face food insecurity, with 42 percent of students in the UC system reporting they had experienced a decrease in quality or intake of food in the last 12 months.

“You have to either think about buying food or paying tuition,” Erica Perez said. “We should not be thinking about sacrificing things to get a higher education … our needs as students aren’t being met, and that’s what frustrates us.”

Erica Perez and Washington both emphasized the importance of protesting to express student beliefs.

“I definitely believe that protests can have an affect on a political agenda, and sometimes this is what our education looks like,” Erica Perez said. “Organizing gives you a voice; protests are able to give you a voice where you can express yourself the way you want to.”

The protest has been in the planning stages for two months, with weekly conference calls involving several students across the UC. Students discussed logistics and tactics to increase students’ comfort and efficiency as protestors.

“I think that’s beautiful, just to see that students are taking the time,” Erica Perez said in reference to the long meetings. “We don’t see it as work because, when you organize, it’s the passion, it’s something you love to do.”

Despite Regents tabling the discussion on tuition hikes, the UCSB Student Activist Network will be holding a walkout on Monday to make a statement that tabling the discussion is not enough, and that students want a rollback on tuition prices. Students across the UC system will leave their classes, and students at UCSB will gather under Storke Tower to express their disapproval.

Correction: The photo caption incorrectly said the protest was in 2015, not 2014.

We had an interesting discussion about this at work today. 4 of us have our undergraduate degrees from UC campuses. Our conclusion: current UC students are whiners who protest everything and have no tolerance for dissenting views. Their protests often become destructive. They do not allow for free speech, only allowing their own biased views. So, we all sat down and emailed our state legislators, urging them to not charge tuitions increases to us. We asked that they charge increased operating costs to the students. We all decided ,years ago, to hang up on the annual calls soliciting donations for… Read more »

So, because a minority (do you have evidence to the contrary? If so, I would love to see it) of the 18,000 undergraduates protest in ways you dislike, your” solution” is to “penalize” all (BTW: your “solution”, as it is written, is incoherent. I would ask for clarification vis a vis the mechanics, but given your initial “logic”, in this instance I will ask that you refrain from attempts at a reasoned response).

My tentative conclusion is that the quality of student and education at UCSB in the 1970s must have been considerably below the minimum acceptable standards of today.

You are a part of the problem. Instead of allowing response, you literally just say ‘given your initial “logic”, … I will ask that you refrain from attempts at a reasoned response’. You then go on to call the commenter stupid. If this is your attempt at conversation, grow up. Nir solution, as I understand it, is a continued disinvestment from education on the part of the state and a funding primarily sourced through student tuition and fees. Though I do not personally believe this is a solution that should be enacted, I will lay that aside for a moment.… Read more »

I will respond to you with similar befuddlement and well-deserved brevity. My argument had NOTHING (CAPS here for you since stimulating your attention to reality appears warranted) to do with ANY of the points you raised (non sequitur perhaps is part of your comfort zone?). I did not ONCE argue for or against divestment. And where in the name of sanity did your trump diatribe come from? I did NOT mention politics (presidential or otherwise) in my reply. Perhaps you have attention difficulties, and find it hard to stay on-point? Or, perhaps thinking your second language? If either, I apologize… Read more »

I hope Mr. philosophy professor doesn’t attack the logic of what I’m about to state, but these student protests almost always fail to offer any sort of feasible solution. No tuition increases – yes, I get that, but where is the needed money supposed to come from? California already has the highest income taxes in the nation. These are the same students (maybe not every single one of them) who join protests for UC janitors and file clerks, complaining they should be paid $25-$30 per hour. I’m not saying they shouldn’t receive those wages, but part of that cost is… Read more »

I am NOT a philosophy professor (though I have an affiliated appointment). I have taken a single course in philosophy 40 years past. I won’t attack what you said (so your hope is realized) — save to note that the phrase “maybe not every single one of them” in your sentence “These are the same students (maybe not every single one of them) who join protests for UC janitors and file clerks, complaining they should be paid $25-$30 per hour” either is disingenuous or ignorant (or both). Unless you know something no one else has evidence for, the possibility that… Read more »

Dude – I picture you to be the kind of guy who doesn’t smile much. Maybe you misunderstood my comments – I wasn’t saying or implying that the entire student population is protesting. Do you have any opinion on the actual issue? I suppose you mentioned that the faculty is failing the students. UCSB is becoming somewhat of what I though of Berkeley when I was at SB in the late 90’s. I know you think UCSB failed me, but you may be surprised that the wife and I do OK for ourselves these days. You ever met Henry Sander?… Read more »

So, you can have all the latest electronics, fancy name brand shoes, plenty of money for booze and drugs, but. $280 is too much for you to pay?

Anonymous
Reply to  Fed up taxpayer