The UCSB women’s volleyball team is back on the road this weekend as the team heads to Hawaii to play the 14th- ranked team in the nation.

“It’s a fun team to play,” Coach Nicole Lantagne Welch of the Hawaii squad, said. “I know we’ll be up and excited to play them.”

The Rainbow Wahine lead the conference with a 13-1conference record, 20-5 overall and hold a 1.5 game lead on the Long Beach State 49ers in the Big West standings. UCSB sits at 17-10 overall, 8-6 in conference and is currently in fourth place, two games behind Cal Poly and two games ahead of UC Davis.

A gut-wrenching loss to UC Riverside last Saturday has put the Gauchos on the outside of the bubble as far as an invitation to the NCAA National Tournament goes, though a win against Hawaii this weekend would certainly impress the selection committee in the remaining weeks of the regular season. 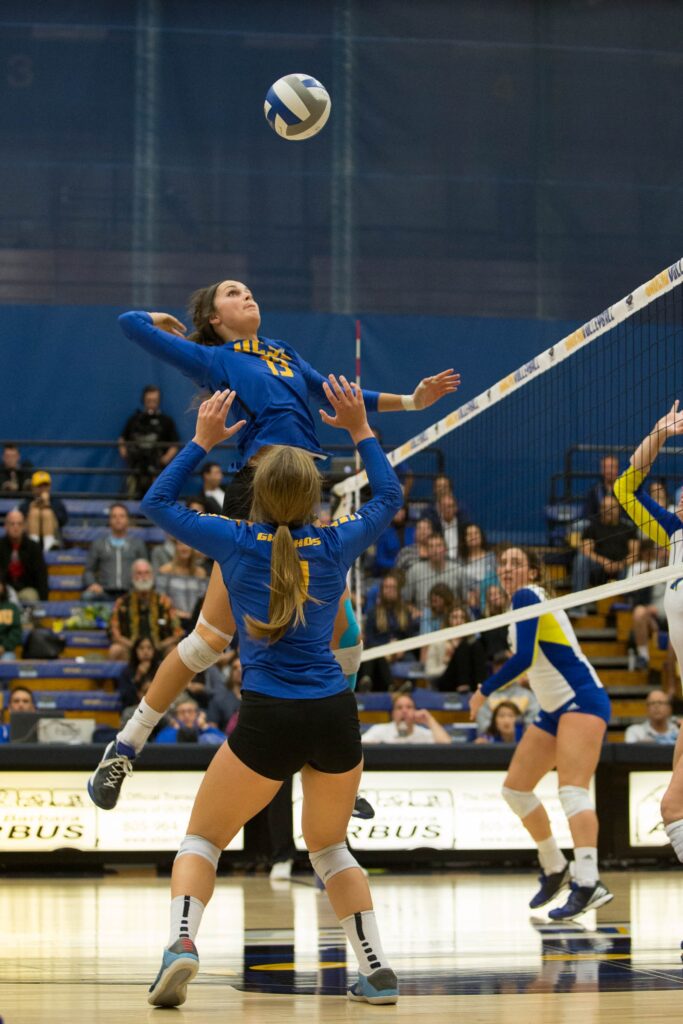 Hawaii hasn’t lost since an overtime match with Long Beach State on Oct. 8, and it dominated the last match against UCSB in straight sets, 25-20, 25-14, 25-19. The Rainbow Wahine have only dropped one set since the LBSU match and have now swept seven straight league opponents, including that same 49ers team two weeks ago.

Rainbow Wahine senior opposite hitter Nikki Taylor has been one of the league’s premier scorers this season, racking up 4 kills per set in conference play. She’s aided by sophomore outside hitter McKenna Granato and middle hitters senior Annie Mitchem and junior Emily Maglio, each of whom rank in the top 25 for kills per set against Big West competition with at least 2.20.

Furthermore, Maglio paces all players with a .409 kill percentage against conference competition, as she’s been good for 100 kills and only 17 errors over the span. Mitchem also ranks fourth with a .353 hitting percentage, completing what has been a ferociously efficient duo in the middle for Hawaii.

Like the Gauchos, Hawaii also relies on first-year setter Norene Iosia. UCSB’s redshirt first-year setter Hannah Juley and Iosia have put up very similar stats through their respective Big West schedules, as Iosia barely trails Juley’s mark of 10.35 assists per set with 10.20 of her own.

Iosia is coming off double-doubles in her last two matches, with 33 assists and 12 digs against UC Davis following a 28 assist and 11 dig effort against UC Irvine,

Hawaii is one of two teams in the Big West without a player averaging four digs per set in conference play, though junior libero Savanah Kahakai’s 3.96 figure is just shy of the mark.

The Gauchos will need sophomore libero Emilia Petrachi and every one of her 4.59 digs per set against Big West foes Saturday, as she presents a situation where UCSB may have a talent advantage.

The Gauchos will continue to ride the offensive shockwaves of their redshirt first-years Lindsey Ruddins and Hannah Juley.

Ruddins has been seventh-best in kills per set during Big West play, averaging 3.70. While she was relatively shut down with 12 kills in the match against UC Riverside, Ruddins had 27 kills in a monster outing against Cal State Fullerton the night before, showing just how deadly she can be.

Juley had 94 assists over this past weekend, 47 in each match, and will have to be on her A-game for the Gauchos to have a shot against the Big West’s goliath.

She’s been on an upward trajectory throughout the year, a trend that will need to continue for the first-year if UCSB is to have any hope of their postseason dreams becoming reality.

Mindset will be important for the Gauchos heading into the final two matches. With their playoff hopes lingering in uncertainty, intensity is a focus for UCSB.

“We can go into this with absolutely nothing to lose and everything to gain,” Coach Lantagne Welch said. “An aggressive mindset is absolutely what we need.”

Relating to gains throughout their season, UCSB’s best weekends this year have come after stretches of great practices, a trend that was shaken last week.

“Over the last month, every week we’ve had great practices except for last week,” Coach Lantagne Welch said. “They know that, they recognize that and they realize how important that is and how much it carries over to the games. The key is that we just stay confident.”

The Gauchos will try and maintain that confidence and defeat a Hawaii team that has appeared, at times, unbeatable.

UCSB will attempt to breathe some fire back into their season on Saturday night, facing off against Hawaii at 9 p.m. Pacific time at the Stan Sheriff Center.

A version of this article appeared on page 7 of November, 17 2016’s print edition of the Daily Nexus.