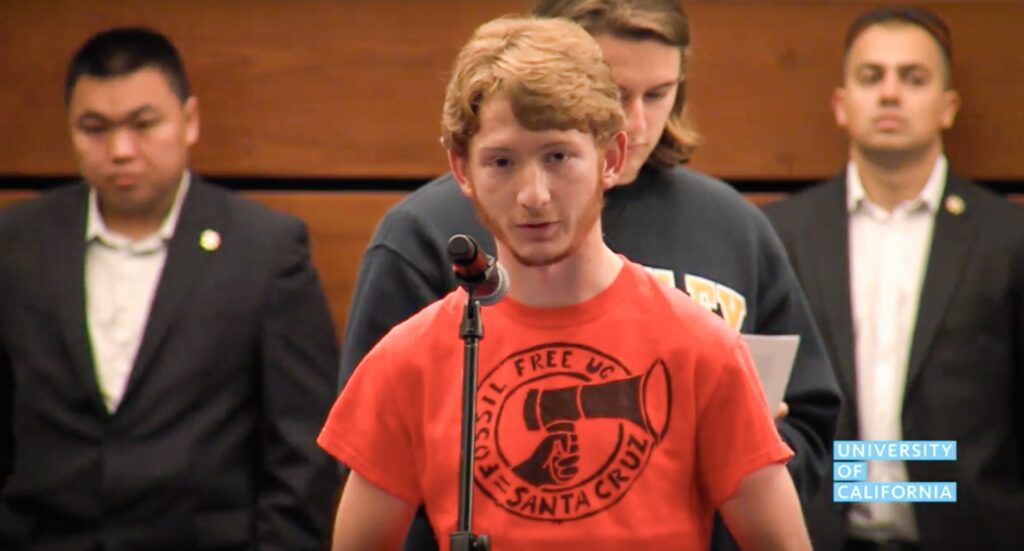 Student speakers from throughout the University of California traveled to San Francisco to advocate against investments in fossil fuels. Courtesy of UCOP

Students across the University of California urged Regents to divest from the fossil fuel industry Wednesday, presenting the board with a petition signed by several hundred faculty members.

Exactly 689 professors signed the petition to support the cause of Fossil Free UC, a system-wide student campaign to end the UC’s investment in oil companies. Ninety-nine of the signatures come from UC Santa Barbara faculty members.

Divestment advocates also presented a list of 100 UC students pledging to commit acts of “civil disobedience” if the Regents do not take action to divest from the fossil fuel industry.

Members of the student coalition used the public forum portion of Wednesday’s meeting to ask Regents to stand for “climate justice.”

“Our planet and our state are at risk if the leaders of this institution do not stand with our futures, families and homes against fossil fuel billionaires,” Rigel Robinson, UC Berkeley student and Associated Students of the University of California (ASUC) senator, said.

Fossil Free UC has been advocating for the University to divest from oil companies since January 2013. The students of the coalition have demonstrated at UC Regents meetings multiple times. They protested at a Regents meeting in May 2014, for instance, demanding the board to create a task force that would address fossil fuel divestment.

The UC system sold approximately $200 million in coal and oil investments in September 2015, but the University still has approximately $10 billion invested in various energy companies, according to the Los Angeles Times.

Students staged an all-day sit-in in May, refusing to leave the UC Office of Investments in Oakland until action was taken toward divesting. The protest prompted a meeting with Regent Richard Sherman, vice chair of the UC investments committee.

According to Robinson, Sherman opted not to have the UC divest from oil companies and told the students that “the UC’s chief investment officer is committed to a strategy of sustainable investment.”

Speakers at the Regents meeting Wednesday specifically addressed Sherman in their pleas for fossil fuel divestment, one student accusing the Regent of “supporting a rogue industry.”

“By choosing not to lead with us, Regent Sherman, you are spreading a diseased lie about the impact of the oil industry on climate and on people,” Sam Weinstein, a second-year UC Santa Cruz student, said. “This issue is not going away, and we are not going away. The fires of the people are roaring.”

Protesters also mentioned President-elect Donald Trump on several occasions. One student, a second-year at UC Berkeley, said the UC needs to lead in “climate justice” in light of having a “climate denier entering the presidency.”

“We no longer have a federal government that will lead on the environment,” the student said. “Right now more than ever, students, faculty, civilians, children, everyone needs your leadership to stand for climate justice.”

Regents will discuss divesting from the fossil fuel industry in the continuation of their quarterly meeting on Thursday.

A version of this story appeared on p.1 of the Thursday, Nov. 17, 2016 print edition of the Daily Nexus.