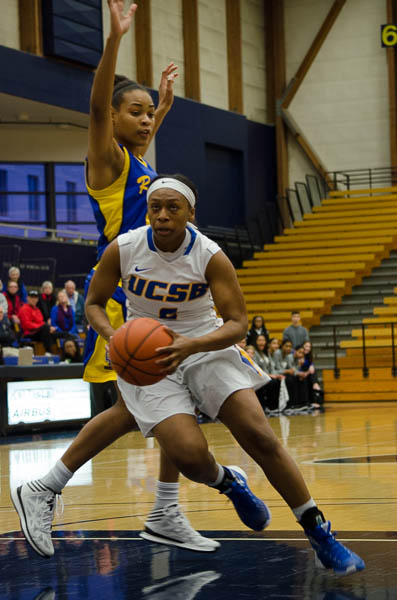 A return to the Thunderdome may be the perfect remedy for the UCSB women’s basketball team after a 77-60 loss to Iowa State to begin the 2016-17 season.

The Gauchos will host the University of Pepperdine this Tuesday for their home opener. Despite belonging to different conferences, the Gauchos in the Big West and the Waves in the West Coast Conference, the two programs have become familiar foes over the years with an all-time record of 15-15.

The Gauchos last defeated Pepperdine during the 2013-14 season on Dec. 3 in a 77-69 win on the road. Since then, the Waves have controlled the series in the last two years.

The Gauchos were nearly on the verge of victory after a 71-69 loss to Pepperdine last season and are looking to correct the mistakes that emerged in the defeat.

“We’ve got to defend penetration better,” said Head Coach Bonnie Henrickson. “[In that meeting], we committed 29 fouls; they shot 39 free throws. They drive it, they can create shots for themselves and screen well. Coming off our last game, we have to be able to defend 1-on-1 [[one-on-one]] better, work on keeping someone in front of us.”

Both teams are looking to get on a winning track after season-opening losses, leaving them 0-1 entering Tuesday.

Despite last season’s meeting against the Waves resulting in a close loss, the meeting marked the breakout of junior guard Makala Roper after a career-high 27 points in the loss. The performance led to Roper being moved from the bench to the starting lineup for the remainder of the 2015-16 season after having just six her freshman year.

Finishing with 25 starts, Roper capitalized in her starting role. She led the Gauchos in scoring with 11.8 points per game and ended with a team-high six 20-plus point performances, four of which occurred after her career game against Pepperdine.

Roper will hope to have more of an impact on Tuesday after just eight points on 3-6 shooting from the field and a 2-4 showing from behind the three-point line.

Preventing Roper from getting into a shooting rhythm were her issues handling the ball as she finished the game with a game-high five turnovers. The Gauchos’ sharpshooter will look to overcome her miscues early in the season after ranking second in the Big West with an average of 4.0 turnovers per game the previous year.

“A lot of what ‘Rope’ does is a byproduct of the efforts of Onome and other players to drive and kick to her,” said Henrickson. “She does a good job of using screens and setting her feet. There are times when we want her to put the ball on the floor and drive it, [which is] an opportunity to manufacture some offense at the free-throw line. [Tuesday] will be a great opportunity for her to get back on track and be the player we all think she can be.”

The issue with turnovers has plagued UCSB’s entire unit as its lax ball control resulted in it turning the ball over 24 times on Friday. The Gauchos were outscored 26-17 in points off turnovers.

The inefficiencies when possessing the ball are reminiscent of last season’s start in which Santa Barbara ended leading the Big West with 18.5 turnovers per game. In 2015-16, it amassed 20-plus turnovers in 14 games, going 4-10.

In addition to turnovers, the season opener highlighted how vulnerable the Gauchos are in the paint. They were at a disadvantage against the Cyclones, being outscored 46-20.

“We did a poor job of recognizing weak side defense and at times we didn’t give the effort you need to be able to get a touch one-on-one inside,” Henrickson explained.

Although a concern, the team is still conforming to the depth added to its frontcourt this offseason as it has made redshirt junior forward Drew Edelman the starter in her first year with the program. In 25 minutes of play, Edelman tallied six points on 3-6 shooting, a tied team-high six rebounds, and one block.

There will be little room for error Tuesday night against Pepperdine, as even in their season opening loss against Long Beach State they held the 49ers to 44 points.

Despite the defeat, the Waves managed to contain the 49ers to dismal shooting percentages of 20.9 percent from the field and 14.3 percent from beyond the arc.

Pepperdine boasts a young roster that possesses just one senior within its total of six players returning from last year. It lost its best player, guard Erica Ogwumike, this offseason as the team’s leading scorer transferred to Rice University after averaging the fifth most points by a freshman in the nation with 18.4 PPG.

An all-around talent, Ogwumike led the Waves in rebounds and steals per game at 7.5 and 1.9 per contest, respectively. She scored 22 points in the Waves’ win over the Gauchos.

However, the loss has opened opportunities for other players that could potentially fill the Waves’ void.

As the lone senior on the team, guard Allie Green topped Ogwumike’s points in the first meeting. She went off for team-high 24 points on 9-15 shooting and was 1-1 from behind the three-pointer. She will look to clean up her shooting after a 4-16 outing from the field and 11 points in the team’s opener.

UCSB and Pepperdine will tip-off at 7 p.m. this Tuesday, Nov. 15 in the Thunderdome.