“You know Christmas is coming soon, so we’re going to treat this night like a gift,” Wyatt Shears triumphantly shouted over the rambunctious crowd. The crowd responded to Shears’ statement by unleashing their antagonistic energy, bouncing off the walls and jumping around like human pogo sticks in the middle of the mosh pit. The Garden, composed of twins Wyatt and Fletcher Shears, performed an assuredly epic orchestration of their inventive sound, self-named “vada-vada.” 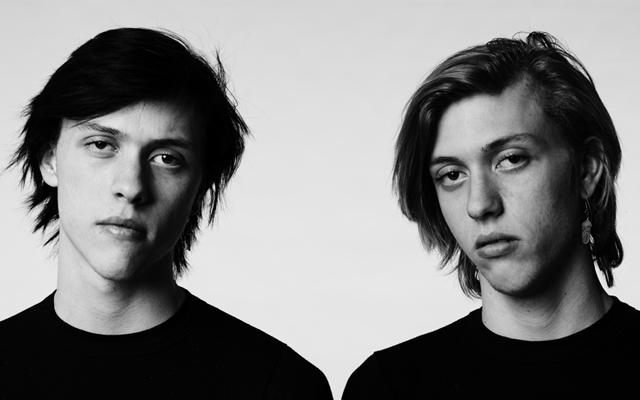 Stepping foot into Velvet Jones, I was in complete awe, as this was the first time I had seen the venue at almost maximum capacity.  A community of artsy teenagers that could’ve easily been casted in “Stranger Things” greeted each other and harmonized over the Modern Baseball track “Wedding Singer,” playing on a loop above the empty stage. I came across concertgoer Dorothy Tang near the front of the stage and asked if she was prepared to mosh her heart out, responding by pointing at her five inch black heeled boots and saying, “These shoes weren’t made for moshing, but I’m ready to head-bang my heart away on the side!” This show was a prime example of concerts bringing complete strangers together, creating a safe space where chaos and camaraderie can coexist.

Three opening acts had brief sets before The Garden was scheduled to take the stage, reminiscent of a Beach Goth-esque festival setting. The second opening act Heyrocco brought forth a Nirvana atmosphere to the stage, building up to a grunge momentum and emitting songs about the never-ending wave of sadness found in a teen’s heart. Heyrocco’s union of engaging lyricism and thrilling instrumentation amplified the intensity of the purple-lit Velvet Jones. Once The Garden hit the stage, Wyatt Shears transfixed a laser-like focus on channeling a spastic diorama of sound. The bleak lyrics provided an addition to the polyrhythmic precision as Wyatt repeatedly yelled out, “I like cereal, but I’m not a serial killer.” The Garden does not rely on impressive theatrics nor grandiose stage backgrounds to get the crowd entranced, hyped up and sweating profusely on each other. During the performance of the track “All Smiles Over Here,” the crowd turned into a maelstrom of failed stage dives, checkered Vans flying in the air and Wyatt handing the mic to ecstatic fans so they could shout out the chorus.

Midway during the set, the sonic distortion escaping from Wyatt’s buoyant vocals in “Crystal Clear” created a journey of sensory annihilation. The bass riffs combined with Fletcher’s thunderous drumming when performing the single “Egg,” displayed The Garden’s stylistically diverse dynamic. The audience reciprocated the same chaotic energy that The Garden put into their performance, creating a symbiotic relationship between fans and the band. The eager fans erupted in a rage for an encore, pleading for one final song to draw the night to a close. Fletcher and Wyatt responded to their dire calls and performed “I’m A Woman,” an ode to the twins’ ability to defy gender roles. A realization hit the audience that perhaps The Garden’s songs were meant to be sung together, in a space where everyone feels at ease and accepted.

As the crowd dispersed toward the entrance of Velvet Jones, people lit their cigarettes with sweat shining from their foreheads and exchanged words about Wyatt’s spontaneous dance moves.

To sum up the show, second-year Chloe Anderson said, “The night was fun and interesting, but most of it consisted of me desperately trying to avoid getting caught and trampled in a giant mosh pit.”

The Garden provided a show composed of unbridled energy, innate eccentricity and polite fans offering a helping hand to anyone who dropped on the floor during the escalated moshing intervals.

The Shears twins don’t adhere to any guidelines, rules  or preconceptions — they embody their own conceptual style of music. Their music is centered on having free reign on creative landscapes and being able to illustrate a panel of alluring emotions through the medium of unconventional sounds. In The Garden’s world, there is no focus on wanting to fit in with what is deemed to be cool in the punk scene. They dare to defy gender roles, genre molds and the tangents of normality.