Oftentimes, metaphors are used as warnings that one can apply to their life. One metaphor that warns others about the inability or unwillingness of people to react to or be aware of threats that rise gradually is the boiling frog anecdote.

Montell, professor of biology at UC Santa Barbara, has been working to uncover the underlying mechanisms of this strange occurrence. The story of the frog illustrates two points of Montell’s research: Animals have two general responses to temperature increases, a fast response to a stark change in temperature and a slow response to a gradual temperature change.

In order to research this seemingly odd phenomenon, Montell used fruit fly larvae rather than frogs to elucidate the mechanisms behind these different responses. According to Montell’s results in the journal Nature Neuroscience, in order “to characterize the behavior of larvae in response to different rates of temperature change, we built an apparatus that allowed us to accurately control the heating speed while monitoring larval movement.”

They found that a rapid increase in temperature induced an escape response of writhing in the larvae. However, just like the poor frog in the anecdote, when the temperature was raised gradually, far less of the larvae responded to the change in temperature, and when they did, it was at temperatures higher than those in the first test. But why does this occur?

Montell and his team may have found the answer. The research team was able to identify neurons in the brain that were responsible for these two responses to temperature increases. By analyzing and manipulating the factors involved in these neural pathways, the team determined that a transient receptor potential (TRP) channel was involved in the fast response to a sharp increase in temperature. This specific TRP channel, known as TRPA1, plays an especially important role in the process, stimulating the neurons in the brain to react to the sharp temperature increase. 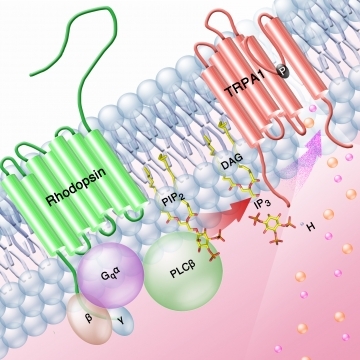 Shown above is TRPA1, the protein that fruit flies use in order to discriminate between small changes in temperature. As Rhodopsin is extremely sensitive to light, it causes TRPA1 to activate . / Courtesy of labs.ucsb.edu

With an idea of the mechanisms behind the differing responses to gradual and stark temperature increases, we may now wonder why there are two different responses to increases in temperature. Montell and his team postulate a hypothesis for this in their discussion in the journal Nature Neuroscience.

A faster rate of temperature increase lowers the TRPA1 channel’s threshold. This response provides animals enough time to react and escape the environment they are in. However, Montell found that if the temperature increase is gradual, animals, such as the larvae, have more time to respond and do not need to initiate an abrupt escape. Both pathways seem to offer a selective advantage to two different kinds of situations.

We now understand some of the mechanisms underlying the different responses to changes in temperature in fruit flies, but the next big step is knowing if this information can be applied to different organisms such as the frog; Montell believes that it could. Many organisms conserve certain pathways across species, and these temperature response pathways could be some of those preserved. If so, we could one day apply this knowledge of fruit fly larvae responses to frogs and possibly even to humans.